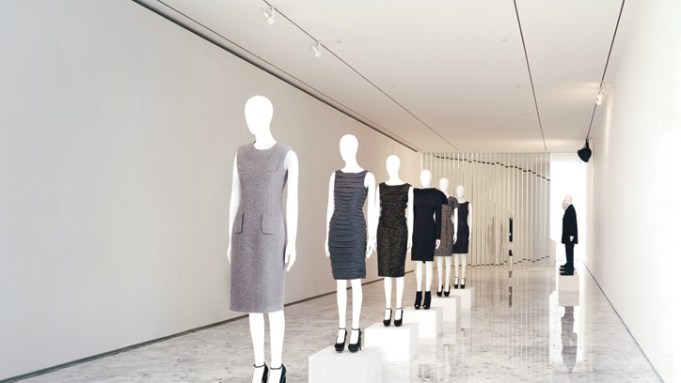 MILAN — Jil Sander has another new owner — this time an Asian one focused on fashion.

The transaction is expected to close shortly.

Speculation Change Capital was looking to sell the fashion house began to percolate last month, as reported by WWD.

“I like to say that Jil Sander was in quarantine because thanks to Change Capital, we cleaned up our act and successfully went from a designer house to a brand,” said Gian Giacomo Ferraris, chief executive officer at Jil Sander, during an interview at the Milan headquarters. “But this was the right moment to sell and now we can accelerate our growth process, increase revenues and improve margins.”

Jil Sander, during an interview at the Milan headquarters. “But this was the right moment to sell and now we can accelerate our growth process, increase revenues and improve margins.”

Creative director Raf Simons and Ferraris, who both witnessed Prada’s sale of the company to Change Capital in February 2006 for an estimated 100 million euros, or $146 million at current exchange, will stay on.

Onward is a $2.6 billion apparel giant that owns some 90 companies based around the world — although mainly in Japan — which design, manufacture and distribute ready-to-wear.

“We are greatly honored that Jil Sander, a luxury brand with exquisite design and spirit of innovation, is joining our group,” said Takeshi Hirouchi, chairman and ceo of Onward. “The acquisition certainly enhances our stable of well known brands. We believe that there are considerable opportunities and synergies to drive the growth of Jil Sander, Gibo and the entire Onward group.”

“After Christmas we started receiving interesting offers which we realistically considered and Onward seemed the most befitting [suitor]. I think the market understood what we had done,” said Stephan Lobmeyr, managing director of Change Capital, which is backed by the Halley family of France.

The most cost efficiencies in the now-complete Jil Sander restructuring resulted from relocating the production and management operations of the house to Italy from Germany, where the brand was founded by the Hamburg-based Jil Sander in 1968.

“We believe we’re complementary and strategic partners for Jil Sander’s future growth as we speak the same language,” he said. “Our investment wasn’t guided by a short-term financial logic but to develop the brand as a supporter to create and exploit synergies.”

Gibo is a key player in the European luxury goods market thanks to licenses with designers such as Marc Jacobs, John Galliano, Michael Kors, Roberto Cavalli and Chloé, among others.

Onward’s support for the current team at Jil Sander is evidenced by the fact that it has approved Ferraris’ business plan for the house through 2012. The guidelines include expanding Sander’s retail network from the current 26 directly operated stores, as well as increasing wholesale sales; further penetrating underdeveloped markets such as the U.S., Spain, the U.K. and Asia; adding more product categories and growing existing ones. A key part of that strategy will be boosting sales of accessories, which are slated to account for 30 percent of sales in 2012.

Change Capital’s sale of the brand was helped by the fact that Jil Sander just finalized its squeeze out, initially set in motion in the spring of 2006, and since July 21, the fashion company has been fully delisted. Prior to that, two percent of the firm continued to be listed on the Frankfurt Stock Exchange. The financial terms of the squeeze out were not disclosed.

The latest sale of Jil Sander continues a somewhat topsy-turvy road for the brand ever since Prada bought the fashion house in 1999. Sander herself left the brand six months later after clashes with Prada chief Patrizio Bertelli, only to be lured back again in May 2003 — then to leave finally in November 2004. Bertelli appointed Simons as creative director in May 2005, which began the turnaround at the house.

Simons’ design aesthetic centers on calm elegance with precise cuts, intricate details and feminine flourishes, and he has consistently garnered strong reviews from buyers and press since his Sander debut in February 2006, his first-ever women’s collection.

While the focus has been on slow but steady growth, Ferraris has added more and more licenses to the Sander portfolio. In addition, Simons’ collections have begun to win back former loyalists of Sander, as well as attract a new clientele ranging from artsy types to the red carpet. In the movie “Io Sono L’Amore” by Italian director Luca Guadagnino, due out next year, Tilda Swinton wears Jil Sander outfits throughout.

Earlier this year, Jil Sander inked a licensing agreement with Marchon Eyewear Inc. to produce and distribute men’s and women’s eyewear, which will debut at retail in January. A preview will be seen during the spring show in Milan later this month.

“Jil Sander is a brand that has the aesthetic competence to create a total look and I’m looking forward to completing my vision for it,” said Simons at the time. Opening prices for Sander eyewear will be $250 and Marchon projects to have 600 points of sale in the first year.

A licensing deal to produce innerwear and beachwear, scheduled to debut in September 2009 and February 2010, respectively, was signed last week with Albisetti SpA.

This fall, Sander will also launch its women’s Scent 79 in 40 Neiman Marcus doors.

Simons is said to be working on yet another product extension, which remains under wraps. The product line is expected to be unveiled at his upcoming spring show.

In addition to licenses and accessories, Simons and Ferraris have steadily expanded the brand’s retail network. Recent store openings include units in New York; Riga, Lithuania, and Porto Cervo, Italy, while on tap for fall are ribbon cuttings in London, Dubai, and the Saudi Arabian cities of Riyadh and Jeddah.

Despite the troubled economy in the U.S., Sander’s management firmly believes in the potential the market offers.

The brand’s new Manhattan store, which opened in mid-June, has generated strong sales and marks the introduction of a new store format developed by Simons. The designer opted for Carrara marble, wax treated steel and Corian details, while Dutch artist Germaine Kruip designed the lighting, the staircase and the dressing rooms.

The store has registered double-digit growth in apparel thus far, while accessories have posted triple-digit increases.