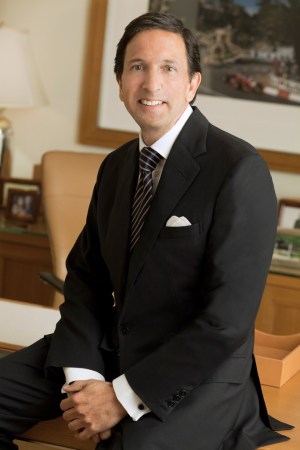 Shares of Kors rose $9.24 to close at $42.85 in over-the-counter trading following the earnings report, which beat Wall Street’s expectations, while fourth-quarter and full-year forecasts were above analysts’ consensus estimates. The stock began trading Dec. 15 at $25 a share.

“We’re in most of the key cities [in the U.S.]. We’re in L.A., New York, Chicago and Miami. It’s really building more stores in the major hubs, and adding more regional marketplaces,” said Idol. For example, the company plans to open more stores in Houston and Dallas, as well as to expand in the Miami market. In Europe, Kors would like to open flagships in Rome, Berlin and Frankfurt, as well as Switzerland and Moscow. Idol said they seek locations in high-traffic areas, whether that’s Prince Street in New York, Roosevelt Field in Garden City, N.Y., or Regent Street in London.

Since the firm operates a two-tier business, which consists of the Michael Kors luxury collection and Michael Michael Kors, which is an “accessible luxury” collection, it’s able to stake out different types of real estate. “Because we have the Collection line, we have a store on Bond Street [in London], which has a lower footfall. We can do that because the average transaction is so much higher,” explained Idol. The same goes for Rodeo Drive in Beverly Hills. “On Rodeo Drive, the average spend per customer is really high,” he noted.

According to market sources, Kors’ stores average about $1,700 a square foot, which is high for the industry. Idol declined to comment on that figure but acknowledged the stores are very productive. On average, Michael Kors stores

Asked if it was confusing to the consumer when she walks into a Michael Kors store and isn’t sure if she’s seeing the designer line or the secondary line, Idol said he doesn’t think so. “People cross-shop. They’ll buy an Hermès or Gucci bag, and then walk across the street and have no problem buying from Zara and H&M because it’s cool. Not everyone who walks into a store will be willing to spend only on luxury price points. No women’s wardrobe is exclusive luxury unless you’re on a completely different scale,” he said.

In the Kors stores, 20 to 25 percent of its handbag business is done in Collection handbags, where the average price point is almost $1,000, said Idol. “You’ll have a woman who will walk into our store and put on a wonderful beaded top from us [Michael Michael Kors] for $150, and she’ll buy a $1,000 handbag. It’s the way she feels. If she feels good about herself when she leaves, she’s not thinking whether she bought Michael Michael Kors or she bought Michael Kors,” he said.

Transforming the firm from an apparel company to primarily an accessories one has been a key strategy. Kors’ accessories have increased at a 57.6 percent compounded growth rate over the last three years, outperforming industry growth. Net sales of the company’s accessories and related merchandise (including handbags, small leather goods, footwear, watches, jewelry, eyewear and fragrances) in both its retail and wholesale segments accounted for about 62.3 percent of total revenue in fiscal 2011, as reported.

Digital is another big initiative at Kors. Idol said what the company has been able to do with Kors on Facebook and Twitter “is really unprecedented in terms of the company’s growth.…It connects with Michael because Michael is a living, breathing person, who’s a lot of fun, and people like to follow and interact with him.”

In what likely won’t be good news for magazine publishers, Idol said a larger percentage of the company’s advertising budget is being devoted to digital. “We have basically frozen our print budgets on a global basis. All of our growth in spend is coming from digital and social, and, of course, our own Web site,” he said. In fiscal 2011, Kors spent roughly $27.4 million on advertising expenses in North America and internationally. He said Kors will be developing an app later this year. Last month, Kors hired Andrea Linett as vice president and global creative director. Her role is to handle all creative for the company, the national advertising shoots, the catalogue and the Web site, said Idol.

Idol said he’s happy with the categories the company is in and isn’t looking to expand into any new ones. “We’re not going to do any more licensed categories. We have all the businesses that we need to significantly increase the sales of this company,” he said. He explained that a big word around the office was “focus.” To that end, he’s not looking to launch a home collection. He said Kors had previously been in the home area, and he shut it down.

Although China is a substantial opportunity for most luxury brands, Kors’ IPO didn’t include its Chinese business. That remains controlled by partners Silas Chou, Lawrence Stroll, Idol and Kors in a separate company called Far East Holdings, which has licensing agreements with Kors that expires March 31, 2041. The Southeast Asian, Philippine and Korean businesses are also licensed, but the Japanese business is a wholly owned subsidiary of Kors. Discussing the rationale for licensing those businesses, Idol said it is better to build them in a slow, methodical way with a localized partner. The long-term goal, similar to other major brands, would be to bring the business back in-house in five to 10 years.

There’s no question there are opportunities in China, but the business needs to be cultivated, he said. “Everyone talks about China. It’s absolutely an explosive marketplace. It’s a successful platform for everyone. Our competitors were in these marketplaces for many years,” said Idol. He added, though, that Kors has “no brand awareness there” and it will take years to develop it in those marketplaces. “We think the best use of our capital, and you can see from our results, is the development of North America, development of our business in Europe and the development of our business in Japan. That’s really all we can handle internally right now, in this company, and do it well.”

Idol named his biggest competitors, all of which have well-developed businesses in China and have sizable handbag businesses, as Louis Vuitton, Gucci, Prada and Coach. To raise awareness of the Michael Kors brand in Asia, he plans to launch Web sites in China and Japan in spring 2013. He also noted that mobile is very important in Japan, and the company is looking to develop mobile capability in Japan next year. The company doesn’t have a mobile presence in North America yet. “Mobile is coming on, it’s definitely going to be a focus for us. Calendar 2013 will be the more important year for us as it relates to mobile and launch of international Web sites. In calendar 2012, we’re more focused on the social piece,” said Idol.

As far as Kors’ wholesale business in North America, he isn’t seeking to open any additional doors. Rather, the growth will come from increasing the number of specialty store doors in Europe. In North America, Kors is also converting more of its presentations to shop-in-shops in department stores, especially for Michael Michael Kors. Idol characterized the accessories business as “amazing” and the apparel business as “good.”

In its third-quarter report, the company said wholesale sales rose 55 percent to $154.6 million. Retail sales rose 82.8 percent to $199.4 million, driven by 75 store openings since the same year-ago quarter, as well as a 38 percent gain in comparable store sales. The gain in comps was on top of a 60 percent increase in the year-ago quarter. European revenues rose 229 percent to $28 million, while comps rose 34.4 percent. In Japan, still in the start-up phase, revenues rose to $3 million.

Discussing what he views as some of the challenges at department stores, Idol said, “Clearly, women’s apparel of all the businesses in the marketplace is one of the most challenged. Probably less so on the designer side and more so in bridge and better price point areas.” He said women appear to be more interested in spending money on handbags, eyewear, watches, jewelry, shoes and the cosmetic-type categories. “I think fashion apparel has become a little less coveted and a little bit more disposable. Women can buy a very good-looking fashion top from $49 to $69. You don’t feel obligated about it. You buy it, you wear it. You might dispose of it. You hear the term ‘fast fashion.’ I think the woman prefers that — it’s more exciting,” said Idol.

However, he feels the Kors customer “is much more focused on the long-term purchases of a designer handbag, designer watch, designer eyewear. Those are statements about who you are. ‘I’m a fashion customer. I’m a luxury customer.’ You’re more apt to look at your girlfriend’s bag than you are what pair of black pants she’s wearing,” said Idol.

As for the funds from the IPO, Idol said they aren’t being used to expand the company’s operations. “The IPO funds were not put into the company. The proceeds went to the principal founders. The company is very profitable, and so we used cash flow from international operations for our growth. If you look at the balance sheet at the end of the quarter, we had plenty of cash and an additional revolving line of credit” to grow the company, he said. He said the IPO was meant for two things. “Number one, it created an opportunity for Michael and myself and the employees at the company to monetize some of our financial position in the company. And it also provided a platform in the future to create an opportunity for the employees to monetize some of their position.…It also gives an opportunity for people to own Michael Kors. I think those people who bought our stock at the opening on the New York Stock Exchange, I would assume, you could say, are pleased. Everyone for the moment is happy.”