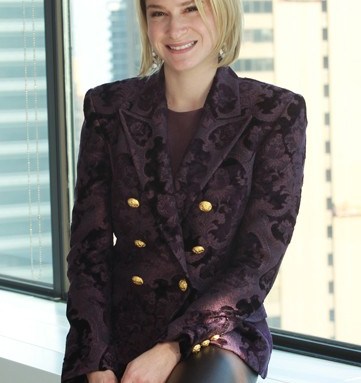 NEW YORK — Julie Macklowe has moved beyond the red carpet to the boardroom.

The hedge fund ex-pat and semireluctant socialite has returned to her family’s garmento roots, so to speak, and embarked on a new career as a fashion backer with a hands-on approach.

Online jewelry startup BaubleBar, her first investment, launches Thursday and marks the start of phase two of her fashion career. Macklowe has a board seat and is helping the company, founded by two recent Harvard Business School graduates, get off the ground. Accel Partners, a venture capital firm, is also investing in BaubleBar, although the size of the infusion has not been disclosed.

Macklowe is working on another startup she plans to run and hinted that “there are at least two apparel companies I’m looking at,” although she favors the fatter gross margins in the cosmetics, accessories and handbag sectors.

Macklowe, née Lerner, is something of a rarity in fashion. The granddaughter of a polyester king is well connected in New York’s social and fashion circles and is a familiar face on the party circuit. She counts Jason Wu as a friend and accompanied Calvin Klein’s Francisco Costa to the CFDA/Vogue Fashion Fund event last month. But she is also fluent in the language of business, having spent 12 years in finance, which culminated in a $250 million Millennium Management-backed hedge fund launched under her own name in early 2009 and shuttered in October.

Now she’s taking her own money and using her contacts and the strategic and management skills she picked up in the private equity world to invest in the changing fashion landscape.

Macklowe said the current crop of young designers are just starting to spread their wings, like Calvin Klein and Ralph Lauren in the Eighties. Many of these brands are looking for cash to expand, and seeking management expertise to take them to the next level.

“You’re going to see some really cool designers who make it big,” she predicted over tea at the Four Seasons in New York recently.

At first glance, it would be easy to underestimate Macklowe as more of a consumer of designer apparel than serious investor in brands. At 32, she is fit, blond, ready to smile and, for better or worse, sartorially adventurous. She’s just as likely to wear a Balenciaga blazer as leather pants for meetings, and strays to whatever strikes her fancy on the way to the numerous red carpets she walks down.

“She’s not afraid to take a fashion risk,” said Wu, describing her style as “very feminine.” Wu and Macklowe met through mutual friends and have no business relationship.

But she’s also very direct and, in conversation, can talk as knowledgeably about the high unemployment rate as she can about Coco Chanel’s impact on how women dress.

Although she could easily spend her days on the party circuit, Macklowe is almost an antisocialite. “I’m doing things that are important to me,” she said. “I’m not running to go to every party.” She’s involved with New Yorkers for Children and The Metropolitan Museum of Art’s Costume Institute.

In many ways, she’s an example of a new species of fashion investor.

“Where it used to be traditional bankers or hedge funds that were interested in investing, we’re now seeing people that are directly connected, whether it be angel investors or others,” said Robert Burke Jr., president and chief executive officer of Robert Burke Associates, who counts Macklowe as a former client and a friend. “It’s all more opportunity for the designer.”

Burke said Macklowe has the business acumen to follow through and help grow the companies in which she invests. “The biggest challenge today is that investors for maybe ego reasons, for self-promotion, invest in fashion and then realize that it’s a much more complex business,” he said. “It’s a sexy business to invest in. It’s not always such a sexy business to maintain and grow.”

The fashion, business and consumer stars are going to have to align if Macklowe is going to back the next big name or get in on the next hot trend.

“You could be speaking with one of these companies for years,” she said. “It might just not be a time when they need money. And you need luck.”

So far, Macklowe has been pretty good at making her own luck. In just three years, she earned two bachelors degrees from the University of Virginia and a better-than-3.9 grade point average.

Jeffrey Walker, former ceo of J.P. Morgan Partners, hired her out of school in 2000 to work at what was then Chase Capital Partners. “She was unique because she was willing to take a risk,” he said, noting that Macklowe challenged hedge fund pioneer Julian Robertson when he came to speak at one of her classes.

“Here’s someone who was 20, who was going toe-to-toe, and Julian thought she was great because of that,” Walker said.

“It’s very easy to sit in one place,” Macklowe said. At Chase she shuttled between Seoul and Hong Kong weekly and squeezed in naps between meetings as she, at times, logged 22-hour workdays helping to structure leveraged buyouts.

In 2002, she moved to New York and started working as an analyst at Metropolitan Capital Advisors.

“She was a moneymaker,” said Karen Finerman, president of Metropolitan, where Macklowe focused on retail. “She just seemed to have a combination of an interest and an aptitude for that space. She has a good sense of risk management, when it’s not working, when to get out. That’s very important.”

A colleague set her up on a blind date with Billy Macklowe, son of Manhattan real estate giant Harry Macklowe. The two have been together ever since.

Yet while she may have married well, she didn’t settle into an easy life. She joined investment firm SAC in 2006 and her profile in the fashion world grew as she invested in the retail and consumer market. She was eager to explore every new brand and retail concept in the sector, regularly making the rounds of conferences and openings to gain an investing edge.

“She’s a very savvy investor,” said Joe Gromek, president and ceo of The Warnaco Group Inc. “She does her homework. She has fun following the business and she appreciates the fashion side of it. She can see how a company is performing.”

But Macklowe yearned for a more hands-on approach.

“I wanted to feel passion about what I was doing and really work with companies in a more active role, which is hard to do while you’re buying and selling stocks,” she said, noting markets are being driven by investor psychology. “There’s a lot of super-irrational moves in the short term because of the sentiment and people. After everyone’s come out of such a hard time, no one knows exactly what to think of anything.”

Stepping back from the markets also afforded Macklowe more time with her three-year-old daughter.

“Nothing to me is better than taking Zoe to drop-off in the morning and watching the three-year-olds with their oversize backpacks running down the hall, excited to get to class,” she said.

Macklowe’s introduction to the fashion business began when she was near her daughter’s age.

Her great grandfather, Frank Lerner, came to New York from Russia in the early part of the last century and worked in the garment district.

On days when school was out, his son, Harold, was enlisted to help him carry his sewing machine to factories, according to Macklowe’s uncle, Michael Lerner, former chairman of Marisa Christina Inc.

But Harold nonetheless got a feel for the business and after World War II took the T-shirt firm his father developed and turned it into the women’s sportswear brand Fire Islander, which specialized in double-knit polyester in the Seventies and Eighties. At its peak the company had a very respectable volume of about $75 million and factories in what is now DUMBO in Brooklyn and in Bayonne, N.J.

“Some of my earliest memories are of walking the floors with people sewing and patternmaking,” Macklowe remembered fondly.

“I don’t know if it’s in the blood,” her uncle said. “But she’s always been fashion conscious. Hopefully some of that springs from her interaction with our designers.”

• Her greatest irrational fear: “I thought it was heights and rock climbing. Then I went rock climbing with my husband and I don’t think it’s so irrational.”

• Who she’d like to meet: “Coco Chanel. Everyone wore corset dresses and they went to wearing little flapper dresses. She changed the way things were done. She was a visionary.”

• Mac or PC: “Both. I love my iPad. Because of Bloomberg [the market news service], from my former days, I do own a PC.”

• The one thing she’d save if the house was on fire: “If the house is on fire and my family’s out, just get out, hopefully with enough covering you.”