The "For Sale" sign is still up at Kate Spade, and observers wonder whether the price is too high given the brand's growth challenges. 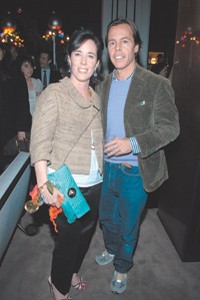 Walmart Holds On to Pandemic Gains

NEW YORK — The “For Sale” sign is still up at Kate Spade LLC, and while some industry observers wondered whether the asking price is simply too high, the company said Monday it was “not in a hurry,” but was in serious negotiations.

Neiman Marcus Group is said to be disappointed that it’s been nearly 11 months since it put Kate Spade LLC up for sale, according to a source close to the company. NMG officials did not return phone calls seeking comment.

NMG, which owns a 56 percent stake in the New York accessories company, said last September it was “exploring strategic options,” including a possible sale. NMG purchased a majority stake in Spade in 1999 for $33.6 million from Alex Noel Inc.

Texas Pacific Group and Warburg Pincus LLC, two equity firms, bought NMG for $5.1 billion in May 2005. Industry sources speculate NMG’s asking price is anywhere from $100 to $500 million, and Liz Claiborne Inc. and VF Corp. were believed to be contenders in the seemingly slow sale. According to source close to the company, the Spades, Bell and Arons have right of refusal in their contract with NMG, and are very particular about whom they choose to sell the 56 percent stake in their company to.

One source said that Spade’s profit projection has gone down, as its financial picture was closely examined. In 2004, sources estimated the company generated $275 million in sales, a 25 percent increase from the year before. Last year, the company announced a rollout of up to 32 stores within three to five years. The company now has 19 Spade stores, one Jack Spade store and four outlet stores.

“The selling price of the company has absolutely nothing to do with why that sale has not been finalized,” said a Marybeth Schmitt, spokeswoman for Kate Spade. “This next move for Kate Spade is an important one, and they want to make sure it is in the best interest of the brands. Kate and Andy Spade and their partners are not in a hurry to negotiate the future of their company, but are only interested in finding the right strategic partners. They’re in talks right now with a few potential partners and are enthusiastic about the progress.

“It is a brand. There are not that many brands out there that one can buy,” said Andrew Jassin, managing director of the Jassin O’Rourke Group, a consulting firm here. “There are a lot of venture firms that are not experienced and have fund money. Usually when a business sells at multiples, it should be experiencing robust sales. It’s not like there’s robust growth at the moment. [And with profit projections down] there have to be some problems there.”

“We were looking at it early in the process. However, upon further diligence, we withdrew our interest in the acquisition of this brand,” said Abe Chehebar, chief executive officer of Accessory Network Group, which acquired accessories firm Le Sportsac for a reported $100 million in November 2005 under a newly formed affiliate company, Brand Science LLC, in alliance with Itochu Corp.

“The Kate Spade brand has a high level of recognition and has potential to grow, but we felt that based on the financial performance versus the asking price, the numbers did not make sense. I am sure that with a more realistic valuation coupled with the right buyer, this can be a meaningful investment.”

Several industry insiders claim Spade has lost some momentum in recent years, having veered off the path of its tried-and-true nylon handbags bearing the brand’s minimal black-and-white logo into too many categories. Through both licenses and its own production sources, the company has at one point or another been in footwear, some apparel, an exclusive accessories line featuring exotic skins called Collect, tabletop, stationery, eyewear, baby clothes and strollers, hair accessories, fashion jewelry and bedding. Last fall, the company ceased its bedding license, which was in alliance with Springs Mills.

Its stores are crammed with the many product categories featuring its own brand and other labels. The Broome Street flagship here, which was redesigned last July, offers an eclectic mix of art and design books, clothing from other designers, various giftware and vintage jewelry.

“When a luxury brand like Neiman Marcus divests itself of Kate Spade, there’s a story there that we don’t know,” said Emanuel Weintraub, president and chief executive officer of Emanuel Weintraub Associates. “People in luxury frequently have an overstated point of view of what their property might be worth, [but] their name is a solid name.”

Arnold Aronson, managing director of retail strategies for Kurt Salmon Associates, said, “Kate Spade represents one of the outstanding new comprehensive brand names in the luxury and aspiring luxury channel of distribution. They’ve been very successful in becoming a well known and successful name in the luxury channel. But there is still substantial growth. The major challenge today is how well their strategic growth plans are executed. There is certainly the potential for much more growth.”

One prominent high-end specialty retailer, which has cut down on its Spade assortment over the years, said, “It had a lot more importance when it was focused, when they didn’t try everything. They ran the risk of licensing too much. There’s a lot of Kate Spade out there — it doesn’t say exclusive or cool. It lost relevance somewhere.”

Kate Spade was founded by now husband-and-wife team Kate and Andy Spade and two other partners, Pamela Bell and Elyce Arons, in 1993. Kate, a fashion industry veteran and a former senior fashion editor at Mademoiselle, infused her bags with a sense of wit and whimsy. The company was integral in creating the contemporary handbag category, which is now thriving with brands such as Theory, Juicy Couture, Tory Burch and Botkier the category leaders.

The handbag market has markedly changed since the early Nineties, when the options were many for designer or department store brands. Today, the high-low phenomenon that permeated the apparel world has hit the accessories category. Calvin Klein and Isaac Mizrahi are designing bags that retail for under $200, while contemporary handbag prices from the likes of Botkier and Be&D have skyrocketed to the $700, $800 and even $900 price points.

John Mendes, co-owner of Plaza Too, which has eight accessories stores in the New York area, was planning to cancel the store’s fall order from Spade, reasoning that the company had lost its direction, but decided to go ahead with it after a representative from Spade arranged a meeting to explain the firm’s vision and directives.

“Kate Spade is selling incredibly well [for spring],” said Mendes of the brands’ shoes. “My sales are up.”

Mendes also noted that Tory Burch’s logo ballet flats are hot. “The Tory Burch bags reminded me of the old Kate Spade,” he said. “My customers can relate to her totes at $225; it’s a no-brainer. I love the [Spade] bags, but at $475 or $575, you’re in a different ballpark. I feel like Kate Spade has gotten lost.”