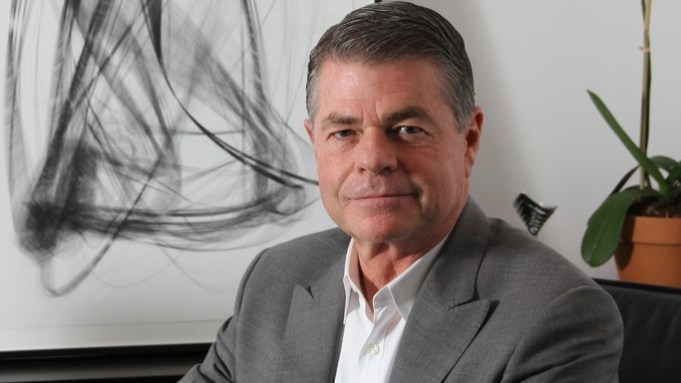 PVH Corp. and Calvin Klein Inc. have proven over the past decade they have the right chemistry.

Since PVH’s acquisition of CKI in 2003, global retail sales of products bearing the Calvin Klein name have catapulted from $2.8 billion in 2003 to $7.6 billion in 2011. CKI has provided PVH with not only a world-class designer brand, but the opportunity to market products both domestically and internationally at higher price points and in higher-end distribution channels than its heritage brands’ offerings.

In an interview, Tom Murry, president and chief executive officer of Calvin Klein Inc., called the integration into PVH “historically smooth.” Generally, when mergers and acquisitions don’t work, it’s usually about the culture, he said. “We were very fortunate. The senior management team of PVH and the senior management team of CKI got along from Day One. It was a nice cultural blend of personality types.”

Bruce Klatsky, the former ceo of PVH who engineered the CKI acquisition, has been credited for being the main reason the brand’s owners, Calvin Klein and Barry Schwartz, agreed to sell. “Bruce was very passionate and tenacious and made it happen,” said Murry. After two years of negotiations, PVH purchased CKI for $420 million in cash, with additional payouts of as much as $270 million. Schwartz left right away, but Klein remained as a consultant for three more years.

One of the stipulations for the deal was that PVH maintain a separate and distinct culture for CKI, keeping largely intact the headquarters at 205 West 39th Street in New York City and the management headed by Murry. When the companies merged, the front of CKI’s house was basically left alone. It was the back-end functions, such as IT, manufacturing, distribution and finance, that were integrated into PVH.

The ceo said that, in the beginning, his executives met frequently with the PVH management team. “You get to know people over time. They understood the strength of the Calvin Klein brand and did research on that, not only in the U.S., but all over the world. They felt there was a very significant growth opportunity there, which obviously they were right about,” said Murry.

CKI operates as a licensing model, whereby Murry oversees some 40 domestic and international Calvin Klein licensees, in categories such as women’s sportswear, jeanswear, underwear, fragrances, tailored clothing, eyewear, men’s tailored clothing, women’s suits and dresses, women’s performance, men’s and women’s golf apparel, hosiery, socks, footwear, swimwear, jewelry, watches, outerwear, handbags, leather goods, home furnishings and accessories. Its largest licensees are Warnaco Group Inc., which in 2010 accounted for 42 percent of revenue; G-III Apparel Group Ltd., which accounted for 14 percent, and Coty Inc., which accounted for 12 percent. PVH, which reaps royalties from the sale of the Calvin Klein merchandise, had sales last year of $5.89 billion. According to PVH’s most recent 10-K filing, Calvin Klein had royalty revenue in 2011 of $273 million, up from $244.9 million a year ago.

In 2010, PVH acquired Tommy Hilfiger’s business for $3 billion. While CKI is bigger than Hilfiger in global retail sales, Hilfiger makes more money than CKI because Hilfiger is an operating business for PVH, while CKI is a licensing model, said Murry. Both companies have contributed to PVH’s strong stock performance. PVH, which was trading at around $12 at the time of the CKI acquisition in 2003, is now trading for around $90 a share on the New York Stock Exchange. Hilfiger and CKI operate completely independently of each other.

Murry reports to Emanuel Chirico, ceo of PVH, with whom he says he has a great relationship. He also has a strong relationship with Allen Sirkin, president and chief operating officer of PVH. “I consider him a friend as well as a colleague. His contributions over the many years of his career have been remarkable. He’s a class act. If it wasn’t for the success of what we refer to as the heritage business, PVH would not have had the wherewithal to buy Calvin Klein. And he was responsible for the success of the heritage business,” said Murry.

Calvin Klein’s business today operates on three levels: the designer-level Calvin Klein Collection, the bridge ck Calvin Klein line and the better-priced Calvin Klein label, which generates the lion’s share of the business. For 2011, about 40 percent of CKI’s royalty, advertising and other revenues were generated domestically, with the remainder coming from international.

In assessing growth prospects for the Calvin Klein business, Murry cited the Asian business as being a hot pocket of opportunity.

“The Asian business is very strong. The European business is soft in southern Europe, and better in northern Europe because the economy is difficult in southern Europe,” he explained. In 2011, he said the European and Middle East business, accounting for $2 billion in global retail sales, increased 13 percent; Asia, which generated $1.4 billion, grew 22 percent, and North America, which accounted for $3.9 billion, expanded by 11 percent. Specifically, China generates most of Calvin Klein’s Asian business ($356 million in retail sales), followed by Japan ($229 million) and Korea ($227 million). “You’re seeing solid growth in every region,” said Murry. He noted that the way retail is conducted in Asia varies by country. In China, it’s a combination of freestanding stores and multibrand stores, whereas in Korea and Japan, it’s more of a department store business.

Murry attributed the success in China to several factors. “We’re doing a lot of advertising in China. The economy is growing very rapidly and there are 300 million people in the middle class. The brand is very, very well known. We’re increasing our retail square footage dramatically every year. It’s a combination of more retail exposure, a more affluent consumer, a strong brand, good product and good execution. All those fundamentals,” said Murry.

Murry noted that in all of the BRIC countries (Brazil, Russia, India and China), “we’re growing at or better than the rate of economic growth in that country.”

As reported, CKI plans to take its European CK Calvin Klein apparel and accessories businesses in-house, effective in 2013. It will terminate its existing license agreements with Warnaco Group for the distribution and sale of CK Calvin Klein apparel and accessories and the operation of retail stores. CKI is currently in discussions with Warnaco to ensure a smooth transition and to decide the future of the stores. “We’re analyzing location by location together,” said Murry. PVH’s 2010 acquisition of Tommy Hilfiger provided the company with a European operating platform and distribution system. It is expected that the CK Calvin Klein European business has the potential to reach about $500 million in sales in the next five to seven years.

Turning to the high-profile Collection business, designed by Francisco Costa in women’s and Italo Zucchelli in men’s, Murry admitted that it isn’t profitable. “It’s the brand builder and creates the halo for the brand,” said Murry. He said if one takes into account all the publicity Calvin Klein generates (both through Collection and other lines) via fashion shows, red-carpet and editorial coverage, it accounts for more than $400 million in ACE (advertising cost equivalent). He said that editorial coverage has more “believability” to consumers than advertising. But since Collection was brought in-house in 2009, “we’re seeing steady growth and steady improvement.”

“Now that we own and operate it, we’re heavily investing in it to bring it up to the level that it needs to be,” said Murry.

Murry said he never got any push-back from PVH on the costs of operating the Collection. “They got it from Day One. They supported the concept of bringing the business back in-house. They understood and understand the significance and importance to the overall Calvin Klein brand,” said Murry.

The Calvin Klein brand, which is known for its edgy advertising, is allocating more of its budget these days to social media. In 2009, digital media accounted for only 1 percent of the ad budget. In 2011, that rose to 20 percent and will increase to 23 percent this year. The social media activities range from Facebook (its page has 3.9 million “likes”) and Twitter, to advertising on various Web sites.

“We keep growing the amount of advertising we spend each year,” said Murry. “With digital growing, it doesn’t mean we’re doing less print. The whole pie is getting bigger. We spend more than $300 million a year on global advertising. We’ve been increasing every year, except for the recession year [2009], where we kept it flat.”

Murry still believes that advertising is critical to the brand’s success. “My sense is that it’s still an important part of keeping the brand as strong as it is, relevant, fresh and innovative.” He said the company uses many of the same photographers and creative directors as it did when Calvin Klein was there.

Murry’s goal is to increase the CKI business to $9 billion in global retail sales in 2014. He plans to get there by continuing to elevate the brand image across every region of the world, continuing to innovate the product and increasing points of sale globally.