Lee Jeans, part of the Kontoor Brands portfolio, is sold through a variety of wholesale channels.

Kontoor Brands is feeling the effects of the coronavirus.

The denim company, parent to Wrangler, Lee and Rock & Republic, released quarterly earnings Thursday before the market opened, falling short on both the top and bottom lines.

“The COVID-19 global pandemic has had an unprecedented impact on the world, including Kontoor’s operations and results,” Scott Baxter, president and chief executive officer of Kontoor Brands, said in a statement. “During the first quarter, we took decisive actions to support the health and welfare of our most important asset, our colleagues around the world, as well as to strengthen our financial flexibility. Through February, results were in line with our expectations, but as the quarter progressed, impacts from COVID-19 became more pronounced.” 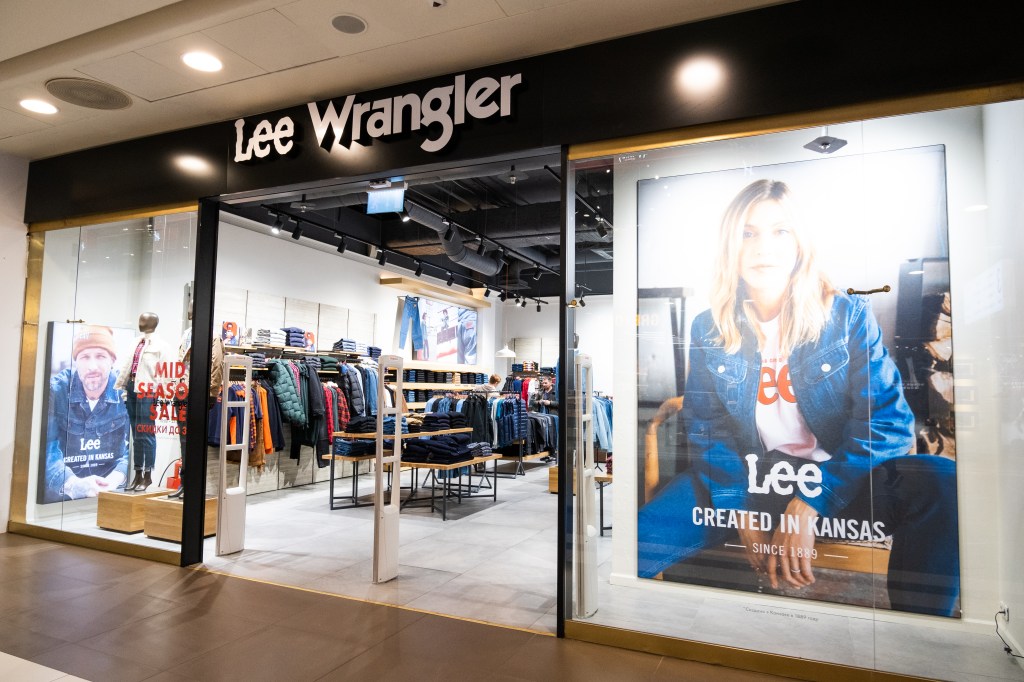 For the three-month period ending March 28, total revenues slipped 22 percent to $504 million, down from $648 million the same time last year. Meanwhile, the company reported a $2.7 million loss, compared with profits of $15.4 million during 2019’s first quarter.

But the Lee brand, which is heavily distributed in China, took the biggest hit in profits, falling roughly 94 percent to $973,000, down from $17.6 million a year earlier. Wrangler’s profits, meanwhile, increased about 43 percent to $33.8 million, up from $23.6 million the same time last year. The losses were partially offset by growth in the U.S. digital wholesale channel.

Shares of Kontoor Brands closed down 5 percent Thursday at $18.68 apiece. The stock is down more than 45 percent year-over-year.

Kontoor, which spun off of VF Corp. in May 2019, has partnered, franchised, licensed and owned branded, non-branded and outlet stores throughout the world, but does the majority of its business through various wholesale channels and its e-commerce business. The wholesale channel represented about 85 percent of Kontoor’s global revenue during the company’s 2019 fiscal year.

On March 18, Kontoor, like many retailers, temporarily closed all company-owned and operated locations in North America and Europe, including VF outlets, Lee Wrangler outlets, Lee Wrangler Clearance Centers, Wrangler and Hometown Studio stores, in response to the coronavirus pandemic. At the time, the company expected closures to last just two weeks, or until around March 27, and said employees would be paid during this time.

As of Thursday, stores in North America and Europe remain closed. In China, all owned and partnership brick-and-mortar stores have reopened. Kontoor distribution centers around the world are also open.

The company, which ended the quarter with $479 million in cash and equivalents, has implemented a number of cost-saving measures in recent weeks to help curb losses, including temporarily suspending quarterly shareholder dividends, implementing executive pay cuts and furloughing the majority of in-store and corporate associates. It also drew down $475 million from its revolving credit facility in March.

Last quarter, the company said it would reschedule Wrangler’s China opening from spring 2020 to fall 2020 to help prevent the spread of the virus. In early April, Kontoor began making tens of thousands of medical gowns in response to the pandemic.

In addition, Kontoor withdrew its 2020 fiscal-year guidance. The company did say it expects further declines in April, although digital sales have been up in recent weeks.

“The uncertainty of COVID-19 remains,” Baxter said. “These measures, which include the amendment of our credit facility and the related temporary dividend suspension, will provide strengthened liquidity that is paramount in these uncertain times and enable Kontoor to emerge from this crisis well positioned to best serve the future needs of our stakeholders.”

“We believe Kontoor’s key retail partners remain well-positioned to navigate this environment,” the ceo continued. “With more than 200 years of authentic heritage, our two iconic brands offer consumers a distinct value proposition. In addition, we are highly encouraged by significant new programs and distribution gains that are expected for the second half of 2020. Our iconic brands, coupled with our cost savings efforts and scaled, agile supply chain, position Kontoor well in the marketplace.”