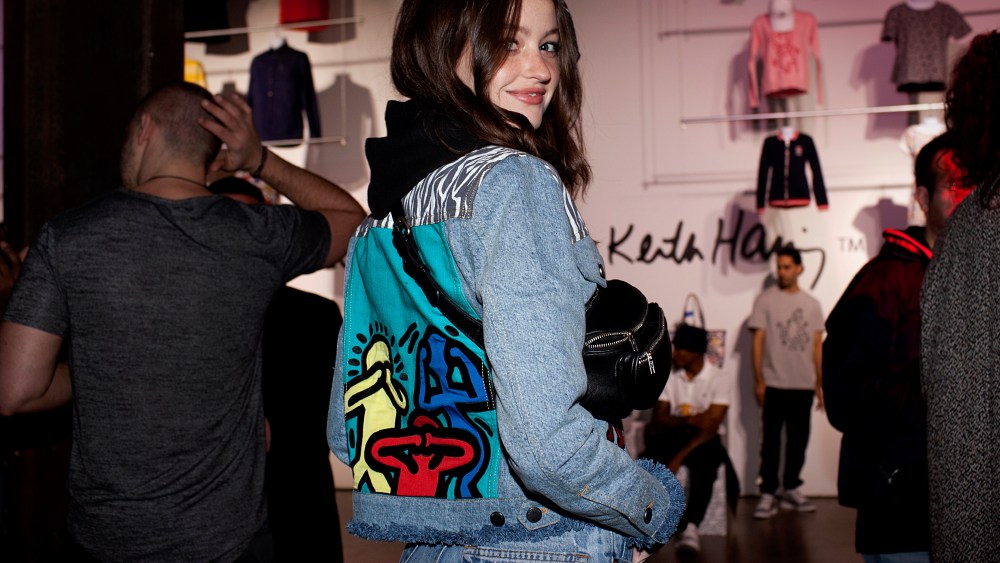 Lacoste is on a mission to re-brand casual.

“The new casual for me is in between streetwear and what I’m going to call, let’s say the fancy casual,” Guibert said.

In fact, casual, which once implied images of sloppy dressers and weekendwear, can now be used to describe the wardrobe of some of fashion’s freshest faces. Many of whom showed up to celebrate Lacoste’s latest collection — a collaboration with late artist Keith Haring’s images — at Pioneer Works, an art space in Brooklyn, N.Y., on Tuesday night. The list included model Wellington Grant, actor LaKeith Stanfield, breakdancer Salif Gueye, Lacoste creative director Louise Trotter and about 500 other notable fashionistas, who donned Lacoste polo tops, sweatshirts, hoodies, denim jackets and sneakers plastered with Haring’s signature graffiti-like drawings as they nibbled on salads and danced to tunes by dj Vashtie Kola.

Guibert said this is how Lacoste should be worn, as a lifestyle brand — not simply for fashion or sports — but as a fashion-sport company that can be worn both day and night, on the court or off.

“I want to stay in the middle,” he said. “I’m really obsessed with my brand being close to the people and not being like arrogant, but being in proximity with people.”

Four years ago when he joined the 85-year-old legacy company, which is owned by Swiss retail group Maus Frères, he said his goal was to rejuvenate the brand by making it a premium label that also appealed to youth culture. Nowadays, Lacoste’s mix of casual-luxury products is its strength, he said.

The numbers prove it: Three years ago, the Paris-based company’s global revenues were around 2 billion euros. Last year that number was closer to 3 billion euros. Lacoste has also expanded its footwear and accessories businesses during Guibert’s tenure. The footwear business, for example, was just 10 percent of Lacoste’s revenues four years ago; it now makes up between 20 and 25 percent. And Millennials and Gen Zers, once less than 10 percent of the customer base, now make up roughly 40 percent of shoppers worldwide.

Even so, Guibert said the brand doesn’t want to move too far away from its tennis roots, which he said are part of Lacoste’s “DNA.” Rather, the goal is to make slight alterations.

“Tennis is quite boring sometimes,” Guibert said. “We would like to do a mashup between tennis and urban [style].”

Meanwhile, Lacoste continues to grow internationally as the desire for streetwear and more relaxed fashions, such as ath-leisure, spreads around the globe — most notably in Europe and Asia.

The activewear market, which includes both athletic and athletic-inspired apparel and footwear, is expected to grow to roughly $413 billion in the next four years, according to Euromonitor International. In the U.S. alone, the activewear market is expected to add another $21 billion in the same timeframe, making the total U.S. market around $138 billion. It’s no surprise then that Lacoste’s biggest market is Stateside.

“Ath-leisure is the definition of being in the middle, between fashion and sport,” Guibert said.

The limited-edition Keith Haring x Lacoste collection, which retails between $55 and $275, is available on the company’s web site and in select stores starting Wednesday. But Guibert predicted, much like a previous Supreme collaboration, which sold more than 60,000 units in an hour, the Haring tieup will likely sell out in a few weeks.

“It’s quite popular because it’s cool,” Guibert said of the collection. “It’s like this urban, street design. I think people right now are looking for classy stuff. They’re looking for comfortable, fancy stuff that you can wear for day-to-day business.”