Company seeks to reduce costs by up to $550 million.

By Molly Prior and Pete Born on February 5, 2009
View Slideshow 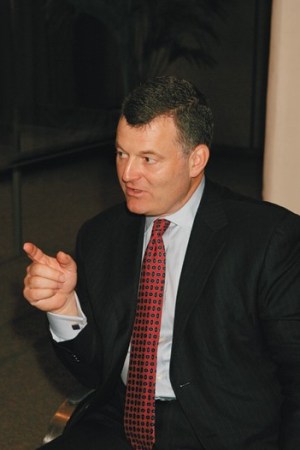 The world has changed and so has the Estée Lauder Cos. Inc. To deal with an emerging set of economic realities and to align its costs with growth, the venerable beauty firm has implemented new marching orders: resize to the tune of 2,000 jobs, restructure and reexamine its organization.

This story first appeared in the February 6, 2009 issue of WWD. Subscribe Today.

Underperforming brands will also go under the microscope, along with redundancies and outmoded methods.

The pair outlined a multipronged, four-year restructuring effort that is expected to wring out $450 million to $550 million in costs.

The first steps of this effort include plans to reduce its staff by 2,000 employees, or 6 percent of the workforce, over the next two years. The restructuring announcement helped lift shares of Lauder 2.4 percent to close at $26.82 on the New York Stock Exchange Thursday evening.

Its cost-cutting measures also include a continuation of the hiring freeze announced last quarter and an immediate freeze in merit-based pay increases. The plan could result in one-time charges of $350 million to $450 million over the next few years.

“We are cutting costs much deeper than this company has ever done,” Freda told WWD following Lauder’s earnings call.

As part of its restructuring effort, the company will shift away from a heritage that fosters competition among the 29 brands, toward a more synergistic and interdependent one, said Freda.

“The hallmark of this strategy is that we will more actively encourage collaboration among the brands up front and to coordinate among the brands to make sure their messaging is unique and relevant to their particular consumer base,” Lauder told WWD. He emphasized the collaboration will be invisible to consumers, and tailored to behind-the-scenes efforts. “Our focus is scaring out expenses that are not touching the consumer,” he said. Lauder acknowledged the unpleasantness of delivering news of the planned staff cuts, but said, “It’s really about a reorganization of the activities we do, and the elimination of the redundant activities that we can consolidate.” Emphasizing the positive outcomes of the reorganization, Freda said, “This will make us a company where creativity and ideas will be even more well received and passed along to the consumer.”

Candace Corlett, president of WSL Strategic Retail, said Lauder is in a unique position in that many of its brands compete for sales in the same retail environment. Contrasting its portfolio to Procter & Gamble Co.’s she said, “P&G has been smart about not putting its brands chest to chest.”

To court the shoppers’ practical mind-set, which has been further emboldened by their pride in saving dollars and trading down, Corlett suggested beauty firms, like Lauder, leverage the strength of their brand portfolio or the different tiers within a particular brand. Referring to Lauder’s plan to trim its workforce she said, “Actions like these are necessary to survive.”

The job cuts will affect mostly manufacturing and distribution workers, white collar positions and back-office operations, said Lauder. It will not affect employees at the store level, who account for an approximate one-third of the firm’s 32,000-person workforce.

For the first half of this fiscal year, the company reduced planned operating expenses by approximately $120 million from existing cost containment efforts and belt-tightening. This equates to about $250 million in expected spending reductions for the full fiscal year.

Immediate belt-tightening plans also include slashing discretionary capital expenditure by 25 percent this year, up from its previously announced target of 10 percent.

“We realize we must also excel at cost containment to remain competitive with companies that are more productive and efficient,” said Lauder. “The current economic climate makes it even more critical to resize our cost structure.”

Under the restructuring plan, the company will seek to generate more than 60 percent of its sales outside of the U.S., achieve an operating margin of 12 to 13 percent and reduce days of inventory 15 percent to 20 percent by fiscal 2013. The plan also includes taking a hard look at Lauder’s underperforming brands, which represent about $1 billion in sales, by adjusting their business models to improve profitability within 18 to 24 months. This effort could include exiting certain markets or product categories. Executives wouldn’t name which brands are in this lower tier, but Lauder said, “We will continue to shine a very bright light on the activities of all of our brands.” For some months, analysts have speculated the list of underperformers likely includes Prescriptives, Origins and, in the fragrance portfolio, Tommy Hilfiger.

Last fall, one analyst noted that divesting less attractive brands would signal the resolve of Freda to ignite change, saying, “That will be the inflection point that will determine if Fabrizio is really serious about changing the culture at Lauder.”

Should the beauty firm divest any brands in the next two years, those job losses would be incremental to the 2,000 already planned, said Lauder.

The company’s aggressive approach seems to answer Wall Street’s most pressing concerns. For instance, earlier this week, Caris & Co. analyst Linda Bolton Weiser warned, “Estée [Lauder Cos.] has to change its culture. It’s fixed cost structure is extremely high, and it has to get it in line with growth.” She continued, “The economic crisis may make it easier for Fabrizio to push what he needs to push through.”

But some on Wall Street think Lauder’s biggest challenge may be up-ending long-held traditions. Goldman Sachs analyst Andrew Sawyer wrote in a research note Thursday, “There could be difficulty executing the cost-savings plan in a culture that has been less focused on productivity historically. A 12 percent to 13 percent [operating margin goal] assumes that the company can drive 5 percent annual productivity growth going forward in the face of a challenging sales environment.” Despite the cautious stance, he added Lauder is most likely capable of earnings-per-share recovery once sales growth resumes.

The 12 to 13 percent operating margin assumes the global beauty market will be flat in 2010, followed by roughly 2 to 5 percent growth. Lauder said it plans to grow share in global prestige beauty with sales growing at least 1 percent ahead of market growth each year.

“The market is the first building block of growth,” said Freda, echoing the words of Procter & Gamble Co. chairman and ceo A.G. Lafley during the consumer products company’s earnings call last Friday. He also said, Lauder will work to “delight the consumers,” a phase often repeated at P&G, Freda’s alma mater, where he held the post of president of the Global Snacks Division. “Boundaries don’t matter, creativity does,” said Freda.

Stressing the firm’s focus on innovation, Lauder said, “New products, which we define as products launched within the last three years — have historically represented 30 percent of sales. That will continue,” he said, adding that Lauder plans to lead in product innovation, particularly in skin care and makeup.

During the first half, Lauder’s earnings decreased 20.6 percent to $209.1 million, or $1.06 a diluted share, on a 1.9 percent fall in sales to $3.94 billion. Lauder said its third-quarter bottom line would range from flat to a profit of 8 cents a diluted share.

Industry watchers applauded Lauder’s ability to attract consumers and run up volume with novel, new products. The problem is in building a day-in day-out business and achieving the kind of momentum that made the company the industry’s leader in the past, according to at least one industry analyst, who spoke not for attribution. “Staying relevant will be very key,” the executive said, adding for the industry in general, “We have a leadership issue.”

Companies like Lauder continue to offer product proposals predicated on desire, while the consumer is now making reality-based decisions. This makes Lauder vulnerable to competition from the mass market. The Lauder brand must overcome much cheaper skin care products like P&G’s Olay. Even the uberpopular MAC Cosmetics and Clinique with its broad-based appeal face competition from premium mass-priced color cosmetics brands like P&G’s Cover Girl and L’Oréal’s Maybelline.

In reaction to Lauder’s restructuring announcement, Piper Jaffray analyst Neely Tamminga said, “There’s an opportunity to re-create themselves, somewhat. There are two kinds of consumers out there: People who have lost their jobs and people who are worried about losing their jobs.” For the latter, Tamminga suggested buying opulent, logo-splashed goods seems in poor taste. “In our view, this is more of a permanent three- to five-year condition than simply a bad holiday,” she said about the state of shoppers. She is encouraged by Lauder’s move into alternative channels, including rolling out Prescriptives to Beauty.com.

For its part, Lauder reiterated its focus on the luxury tier.

Freda said, “In the world of brands stretched beyond their origin and companies that have become conglomerates, we remain a specialist devoted to prestige beauty….These factors are the foundation needed to achieve our new strategic plan.”

He later added, “The world has changed considerably since we first began developing our strategy almost a year ago. As a result, the economic crisis has made us address our past approach and lower the base from which we are launching our efforts. At the same time, it has pushed us to accelerate our focus on change and execute against our new priorities.”

Reflecting on the restructuring strategy and his message to Wall Street and Lauder employees, Freda told WWD, “Evolutionary [change] is the right approach. This company has tremendous strength and value, and we need to build those attributes into the future,” said Freda. Reciting Lauder’s newly adopted mantra, he said, “Imagine, integrate, innovate.” He explained the mantra by saying, “Imagine what this company can be in this different and global world, integrate the 29 separate brands into an integrated whole that can leverage scale in the market and innovate.”