Levi Strauss Growing On Its Own, Cutting Out Off-pricers

The company is still seeing weakness in the U.S. wholesale business, but is tightening some distribution and expanding abroad.

Inside the Levi's Times Square store.

Levi Strauss & Co. is transcending the retail funk with a broader base.

And even though the denim giant’s third-quarter sales in the Americas slipped 3 percent to $771 million, president and chief executive officer Chip Bergh told WWD that the weakness came in the firm’s wholesale business and that at least some of it was by design.

“This is fundamentally not a brand issue,” said Bergh, pointing instead to weaker overall traffic at department stores and chains.

The ceo said at its large accounts, the Levi’s brand was “outperforming each respective banner.” But much of the performance at those stores is beyond Bergh’s control, and he said Levi’s was focusing instead on efforts to “control the controllables.”

That apparently includes the off-price channel.

“We are confident we will exit the year structurally in a stronger place from a U.S. wholesale standpoint,” Bergh said, noting the brand was “significantly” cutting down on sales to off-pricers.

“We use off-price purely to flush excess inventory,” he said. “We have not been selling to the off-price channel and that’s impacting our results, but that’s healthy for us, because Levi’s out the door at an off-price customer at $14.99 is not good for our brand.” 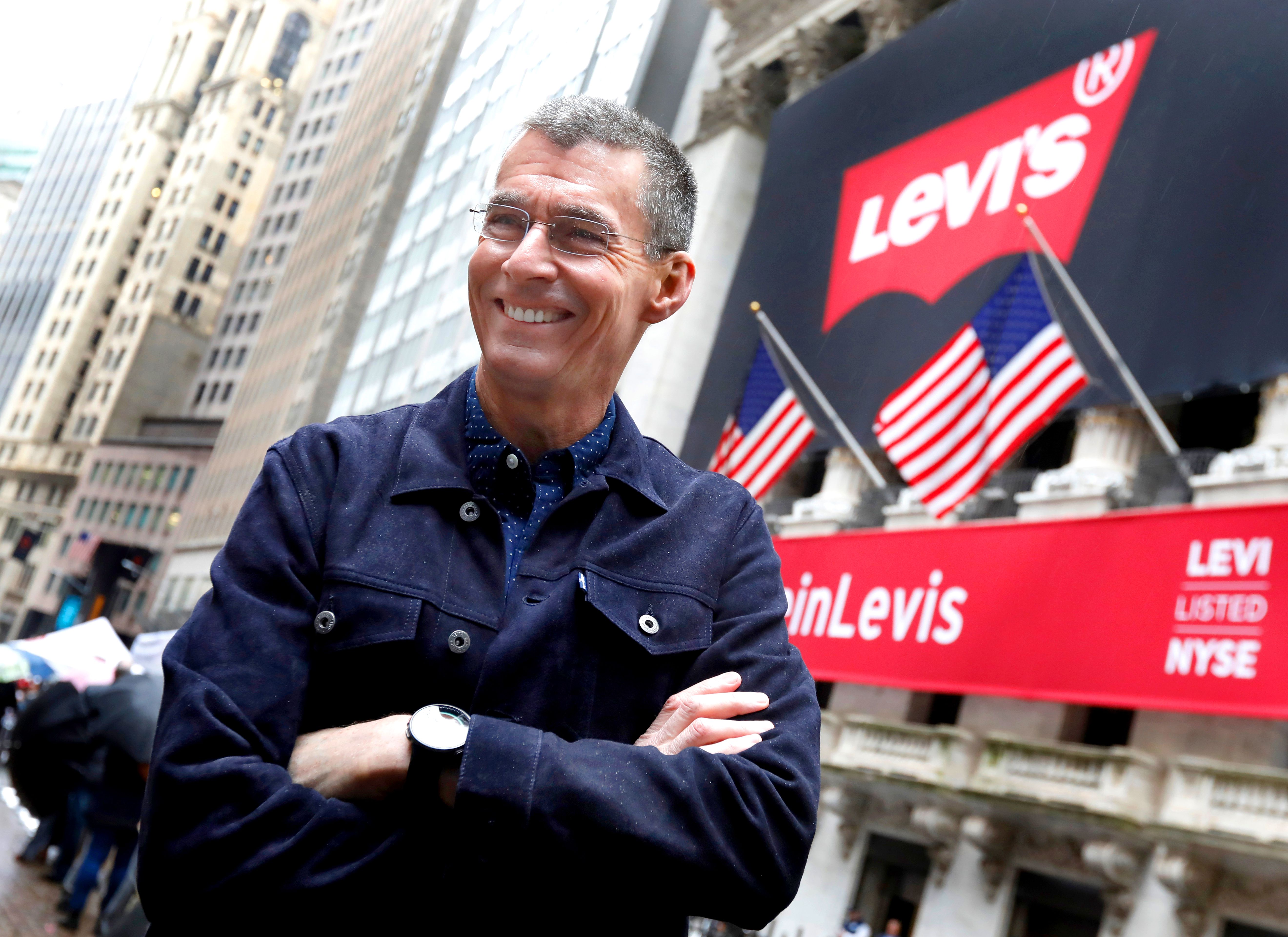 Despite the weakness in the U.S. wholesale channel, the company’s global wholesale business was up 2 percent in constant currencies.

That business was in turn buttressed by the company’s own stores globally and growing businesses in Europe and Asia, where the company recently opened its Harajuku flagship in Tokyo.

Overall, Levi’s net profits slipped to $124.5 million, or 30 cents a diluted share, from $130.1 million, or 33 cents, a year earlier, when a tax benefit buoyed results. Adjusted earnings before interest and taxes rose 2 percent to $176 million.

Bergh, who joined the company in 2011 and took it public in March, has successfully diversified the traditionally wholesale based men’s bottoms business. Both Levi’s tops and its global direct-to-consumer businesses have been growing at a double-digit clip for 15 quarters, in constant currencies. The women’s business has been expanding by double digits for 11 quarters.

While Bergh sees a generally strong consumer, some signs of weakness are starting to appear. “We’re a little bit concerned about the macroeconomic environment, particularly in Europe,” he said.

But he said Levi’s was prepared to operate in a tougher economy, too. “Consumers today are looking for value and values,” he said, noting the power of the Levi’s brand stands out in the market.

One worry that has receded, at least for Levi’s, is the U.S.-China trade war.

“We have not had our head in the sand,” Bergh said. “We’ve been actively working to adjust our supply chain to mitigate essentially all the tariff risk out of China. Less than 2 percent of all the volume we are selling in the U.S. today is coming out of China. A lot of what is made in China is being sold in China.”

That might sort out the supply issue, but China remains an area of intense focus for Bergh, who sees a growth market with untapped potential for Levi’s.

About 3 percent of the company’s global revenues come from China, where some competing brands get more than 10 percent of their revenues, the ceo noted.

Also, the protests in Hong Kong have lately hurt Levi’s business in the region.

Bergh said some of its 30 owned and operated doors in the city have recently had to close and he is watching the situation closely.  He said the protests shaved about a percentage point off of growth in the Asia region for Levi’s.