Chip Bergh Makes the Case for Levi’s and Denim

The ceo remains bullish, but did cite growing worries over the coronavirus in China, which has prompted store closures.

But Levi Strauss & Co. is having a hard time convincing Wall Street. In fact, the relationship has been a bit tumultuous.

And it’s not just because jeans are banned on the trading floor of the New York Stock Exchange.

Shares of the San Francisco-based retail company, which were priced at $17 each during the company’s initial public offering in March, soared roughly 33 percent that same day. Since then, the stock has slipped like many other fashion names as the overall stock market rose, and closed down 0.3 percent to $19.75 a share on Thursday.

But last quarter’s results, the three-month period ending Nov. 24, might help to turn that around.

Despite declines on both top and bottom lines for the quarter, the stock turned upward during after-hours trading and the firm has an outlook that shows continued growth for the next fiscal year. 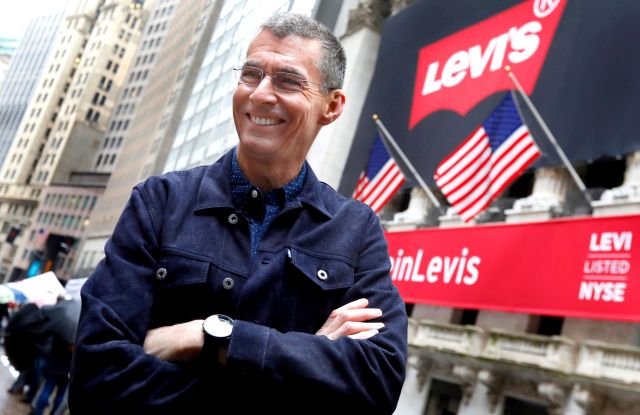 “It was an epic year for this company,” Levi Strauss chief executive officer and president Chip Bergh told WWD.  “We outperformed our expectations for the quarter, particularly in U.S. wholesale.”

Bergh pointed out that the 2019 fiscal year ended on Nov. 24, three days before 2019’s Black Friday on Nov. 29. That means for the 2020 fiscal year, there will be two Black Fridays — a  crucial period for sales and profits for many retailers.

“The absence of Black Friday sort of masks the underlying strength of the business and our organic growth that we continue to see,” he said.

Case in point, for the 2019 fiscal year, revenues increased 3 percent to $5.7 billion, up from $5.5 billion. Total income for the year jumped 39 percent to $395 million up $285 million. The company now expects its 2020 net revenues to grow about 7 percent in constant currency.

“We feel really positive about the business, the business momentum,” Bergh said of the company, which also operates the Dockers brand. “We delivered growth for the full year, despite the number of challenges that are out there.”

Those challenges include pressure in the wholesale division, Brexit, a potential economic slow in Europe, the Hong Kong protests, e-commerce’s continued penetration in the world of retail and the coronavirus in China.

“The virus is probably the one that is consuming most of our time right now,” Bergh said. “We’re taking this very, very seriously.”

That includes restricting employee traveling in and out of China and closing stores in China. As of Thursday, Bergh said the company closed about 50 percent of its China stores.

“That number keeps growing every day and I expect it’s going to continue to grow over the next couple of days and maybe weeks,” Bergh said. “This is going to impact our first quarter for sure. We have a fairly balanced plan for the year, based on all the risks that we are aware of right now, except for the virus. When we developed our guidance and plans for this year, we didn’t know about the virus.

“This is one time where China being only 3 percent of our business helps,” the ceo continued. “[China] is a relatively small part of our business. But we had pretty significant growth ambitions in that market for this year. And right now, those might have to go on hold because of the impact of the virus.”

Meanwhile, the brand continues to grow on multiple fronts, including across regions, men’s, women’s, tops and bottoms.

On Wednesday, Levi said data scientist Yael Garten, who is the director of Siri data science and engineering at Apple and a Stanford Medical School alum, joined its board of directors.

“We still have less than 1 percent market share for tops,” Bergh said. “We can keep growing tops for a long, long time before we run out of runway. This trend toward casualization is definitely helping.”

So is fashion’s renewed emphasis on sustainability.

“More and more young consumers are rejecting fast fashion,” Bergh said. “And we’re the opposite of fast fashion. We’re slow fashion. You buy a pair of Levi’s or you buy a Levi’s trucker jacket and you might be handing it down to your child or your grandchild. Consumers are opting for high-quality products that are versatile and never go out of style. And that kind of defines Levi’s. So we’re kind of in the sweet spot of that.

“The Levi’s brand is so strong right now,” Bergh continued. “Our story is a very good one and there’s plenty of runway for growth. The shareholders that are in it, are in it with us for the long haul.”

“We continue to believe in Levi’s growth story, as its compelling opportunities for global expansion and category diversification present runways for revenue growth and margin accretion over the long-term,” Morgan Stanley equity analyst Kimberly Greenberger wrote in a note.