Links of London Sold To Folli Follie for $84M

Links of London, the British brand known for its cuff links, charms and gold and silver designs, has been sold to the Greek fashion jewelry company Folli Follie. 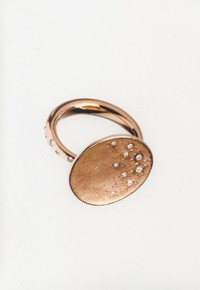 Asics Back in the Black in First Quarter

LONDON — Links of London, the British brand known for its cuff links, charms and gold and silver designs, has been sold to the Greek fashion jewelry company Folli Follie.

John Ayton, who founded Links with his wife, Annoushka Ducas, in 1990, said they sold 100 percent of the company in a deal valuing Links at 45 million pounds, or $84 million. All figures have been converted at current exchange.

Although they are no longer shareholders, Ayton will remain as chairman and Ducas will continue as creative director.

Ayton said a major reason for selling was the desire to expand.

“We were the brand’s creators, but when it came time to roll out stores we couldn’t, with our resources, do it rapidly,” said Ayton. “Folli Follie has been phenomenally successful building its business on a global basis. We’d like to do the same.”

One major area of growth will be North America, which currently generates 18 percent of sales. Ayton said he’d like to see that figure increased to 30 percent.

Ayton and Ducas are not wasting any time. Women’s jewelry will launch at 25 Nordstrom stores for fall, and Links will open two shop-in-shops at Marshall Field’s, which are being converted by parent Federated Department Stores to Macy’s. There are also plans to open freestanding stores in Las Vegas and Washington, D.C., later this year. With regard to other regions, Links will open its first store in mainland China and a Tokyo flagship later this year.

Links of London has 119 wholesale accounts worldwide, concentrated mostly in Europe and the U.S. The company has four stand-alone stores in the U.S. — three in Manhattan and one in the Short Hills Mall in New Jersey. It has 31 stand-alone stores globally.

Folli Follie was founded in the early Eighties by the husband-and-wife team Dimitris and Ketty Koutsolioutsos. The business, which specializes in fashion jewelry and accessories, is listed on the Athens Stock Exchange. There are 280 Folli Follie shops worldwide, and the business is particularly strong in Asia and Japan. The company has annual sales of $318 million.

Ayton said he and Ducas have been friends with the Koutsolioutsos family for six years, and admire how they’ve built their company.

“It was not the highest offer we received, but we’re happy with the valuation, and we’re very happy with the new home we’ve found for Links,” said Ayton, adding the new Greek parent would lend manufacturing capacity as well as financial muscle.

He said he has no problem selling 100 percent of the business, rather than hanging on to a minority share.

“It was a much cleaner deal, and we’re really looking forward to an ongoing involvement with Folli Follie. I feel rather excited,” said Ayton. “It’s a new chapter for the brand.”

The business will remain in London and will be operated separately from Folli Follie.

For fall, Links will launch the Watch Over Me range of women’s jewelry inspired by talismans representing love, luck and protection.

For men, it will launch Rogue, which features tusk cuff links and bangles, pebble pendants and travel clocks and wallets with red detailing.