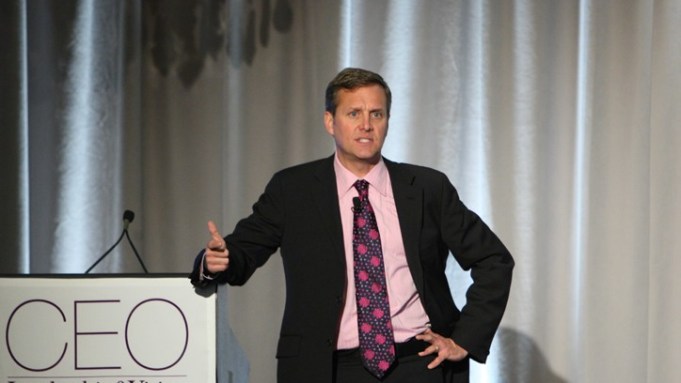 Liz Claiborne, Inc., could be close to solving its Mexx problem.

William L. McComb, the company’s chief executive officer, is trying to sell at least a portion of the loss-leading retailer, freeing up vital capital to enable the group to push the Juicy Couture, Lucky Brand and Kate Spade brands forward.

But it’s far from clear that the company’s long and often painful restructuring would end with the sale of Mexx. Analysts have called on the company to spin off Kate Spade, sell the Liz Claiborne brand to J.C. Penney Co. Inc. earlier than envisioned in the two companies’ licensing agreement and divest smaller brands such as Monet and Kensie.

For now, though, task number one appears to be jettisoning Mexx.

The brand, which Claiborne acquired in 2001, has been bleeding money in recent years. In 2009, former Esprit executive Thomas Johannes Grote was brought in to fix the business, but he appears to be running out of time to do that, at least under the auspices of Claiborne.

A spokeswoman for Claiborne declined to comment on “market rumors” regarding a possible sale of Mexx.

Pressure is building on Claiborne to do something as the company works to stem its tide of red ink, which has seen it report losses for the last 14 quarters. Claiborne reports its second-quarter results on Thursday.

“They just don’t have the luxury of the capital and time to see a Mexx turnaround all the way through,” said Mary Ross Gilbert, an analyst at Imperial Capital.

Gilbert has a buy rating on Claiborne stock and a one-year target price of $11. But the company could be worth more. The analyst said a sum-of-the-parts analysis shows that Claiborne’s various businesses, if sold off one at a time, could be worth as much as $20 a share.

Mexx’s ailing European business and its stronger Canadian presence accounted for more than $730 million in sales in 2010, but also $100 million in operating losses. Getting Mexx off the books would slim Claiborne down further, likely returning it to profitability and boosting its stock, which closed at $5.72 Friday.

That would be little consolation to investors who bought in at $45 in 2007, or industry veterans who remember the company as a wholesale powerhouse that ushered a generation of women into the workforce with pantsuits and amassed a portfolio of more than 30 brands. Already, Claiborne has diminished dramatically in scale and market share — revenues shrank to $2.5 billion last year from $5 billion in 2006.

But freeing up the firm to focus on Juicy, Lucky and Kate Spade could mean everything to McComb.

Chartier noted that an initial public offering could value Kate Spade as high as $1 billion, Juicy has sales per square foot of more than $700 and Lucky’s comparable-store sales grew by double digits this spring.

“If you get rid of Mexx, you see a significant improvement in profitability,” he said. “Pro forma for this year, if you ex-out Mexx and pay down some debt, they would have positive EPS for this year. Today, this Mexx hangover is masking what the other businesses are doing. A lot of people would be interested in investing in this company if Mexx weren’t there.”

A source said Claiborne would prefer to keep a stake and is looking for a partner to operate the business, which is outside of its core market.

“It is ripe for a private equity partner,” the source said.

The deal that’s being contemplated would include a cash payment to Claiborne and the assumption of debt, together totaling about $100 million. The buyer would also pick up another roughly $100 million in costs to fund Mexx, freeing Claiborne from that expense.

The number of private equity firms in the running has declined over the past week or so and the process is nearing completion.

Some observers said Mexx would be a particularly good fit for Sun Capital Partners. Mexx is based in the Netherlands, which is also home to retailer V&D and the La Place restaurants, which were acquired by Sun’s European affiliate last fall. Next month, Sun’s Kellwood division is expected to close on its acquisition of the Dutch brand Scotch & Soda.

“The acquisition of Mexx could make sense [for Sun] since it could bring some synergies to its other Dutch-based businesses that it acquired, but the one big difference between a Mexx and a V&D is that V&D didn’t require as extensive a turnaround as what is needed at Mexx,” said one observer.

Financial circles have been buzzing for some time that provisions in Claiborne’s outstanding euro-dominated bonds make a deal difficult for the company. But there are different reads on how much of an obstacle the euro bonds pose. A sale of simply a significant stake, the most likely scenario for Mexx, could help avoid the issue all together.

Claiborne took on 350 million euros of debt in 2001 and has since refinanced the obligation several times. After issuing other debt and paying down some of the euro notes this spring, 221 million euros, or about $313 million at current exchange, is still outstanding. The company has said it might pay down the debt from its cash flow, through an asset sale or additional high-yield offerings.

Other financial sources said Claiborne’s investment adviser, Perella Weinberg, has been focused on private equity firms about Mexx and approached the usual suspects, including Sun. One individual who turned down the pitch and requested anonymity, said, “We’re not interested in just a piece of the company, and we think the euro bond makes the deal complicated.”

Apart from the potential complication surrounding the euro bond, offloading Mexx might not be an easy sale, said Andreas Kurz, former head of Diesel USA and Seven For All Mankind and now president and owner of fashion consultancy Akari Enterprises.

“Anyone who buys it will have their hands full trying to turn the operation around and gain the valuable concession spaces back that they have either lost or given up due to low productivity and high cost,” Kurz said. “I understand that most of the companies approached so far to buy Mexx are private equity firms, which have a hard time [justifying] buying the company since many don’t have the expertise to turn around companies. There needs to be a strategic buyer with operational excellence and a global vision.”

The prospects of global expansion for Claiborne’s other brands also have been piquing the interest of many buyers. Should the sale of Mexx somehow open the way to a sale of Juicy, Lucky and Kate Spade as a package, the company could no doubt drum up interest.

Meanwhile, John DeFalco, chief financial officer and chief operations officer at Juicy, has left the company to join Party City, confirmed a Claiborne spokeswoman. The spokeswoman said the search for a Juicy ceo is still ongoing.

“Juicy is a contemporary brand that lost some freshness, but it still has a lot of international awareness,” said an individual at one such firm who would be interested in such a package. “The same is true for Lucky Brands. There are huge opportunities for both brands, and Kate Spade, overseas.”

McComb no doubt sees the same opportunities and is hoping to take advantage of them himself.