As it waits for the Slimane effect to kick in at Celine, LVMH touted its cash cow brand, which remains highly popular with Chinese shoppers.

PARIS — New designers may be grabbing the headlines, but as LVMH Moët Hennessy Louis Vuitton charges into 2019, the strong performance of its fashion and leather goods division is still all about one brand: Louis Vuitton.

In the last 12 months, the world’s largest luxury group has appointed new creative directors at Celine and Berluti, and in the men’s wear divisions at Vuitton and Dior.

Speaking to analysts the day after LVMH published better-than-expected first-quarter results, chief financial officer Jean-Jacques Guiony said the group does not break down the performance of individual brands, but refuted one analyst’s suggestion that Slimane’s collections have received mixed reviews.

“We had a very, very good runway show in late February, early March and we got nothing in terms of mixed reviews for that. All the reviews were extremely positive so we remain extremely optimistic as far as Celine is concerned. But it’s too early to comment,” Guiony said on a conference call.

While Slimane’s debut collection in September was polarizing, with some critics regretting its youthful focus and similarity to his previous designs for Saint Laurent, his sophomore show on March 2 was lauded for crystallizing the trend for bourgeois elegance that is making a major comeback for fall.

Though LVMH chairman and chief executive officer Bernard Arnault is banking on the Slimane effect to double or triple revenues at Celine within five years, that implies massive investments in stores and communication, meaning that the group is relying for now on bigger brands to provide growth momentum. 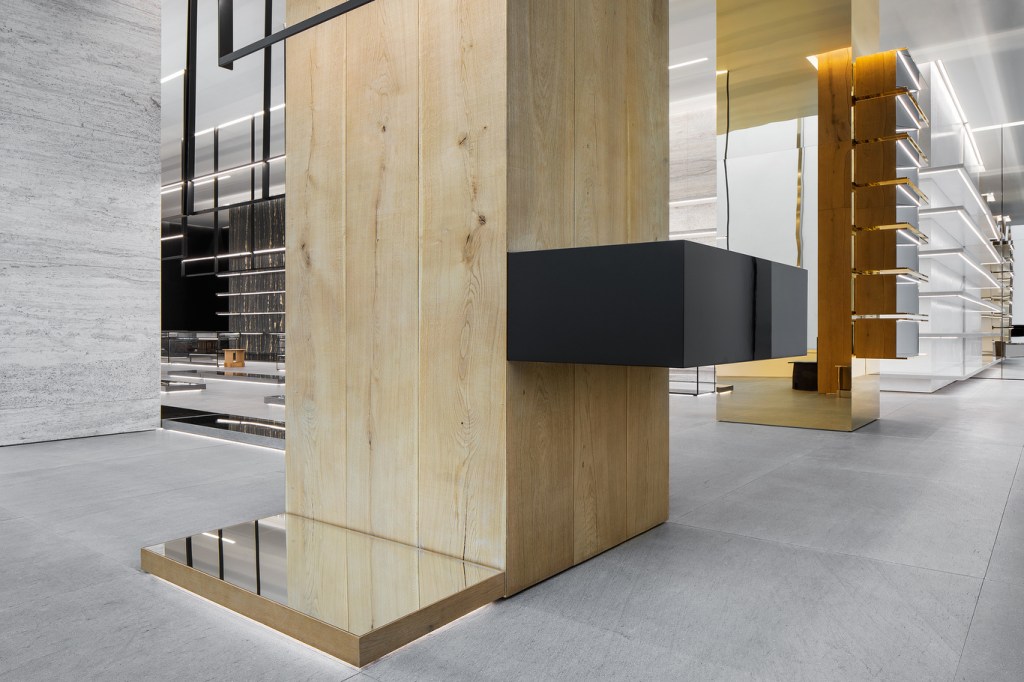 The new Celine flagship on Madison Avenue in Manhattan, designed by Hedi Slimane.  courtesy of CELINE

Its labels — which include Fendi, Loewe, Berluti and Loro Piana — are thriving collectively, fueled by continued strong demand from Chinese shoppers, who account for a third of sales of high-end goods worldwide.

LVMH’s key fashion and leather goods division posted 15 percent growth in organic terms in the three months ending March 31, outperforming all other divisions. “Overall, we are extremely satisfied with the global performance of the portfolio,” said Guiony. “Some brands like Christian Dior and Vuitton did particularly well.”

He credited the strong performance of Vuitton, which last year sailed over 10 billion euros in revenues, to a combination of marketing, product and distribution strategy. The brand recently reopened boutiques in Florence, London, Monaco and Shanghai, and inaugurated a new leather goods workshop in Beaulieu-sur-Layon in France.

Guiony said that while Vuitton’s high level of in-house production had capped its growth in the past, the brand was moving swiftly to increase speed and capacity.

“The production and supply chain people at Vuitton have done a fantastic job in enabling us to develop the production and the number of items that they put into the stores in a tremendous way, first with the same levels of ateliers, and after that by opening up new ateliers,” he said, referring to its leather goods workshops.

“That enables us to grow at double-digit levels in volume terms, and it’s been going on for a while, which probably 10 years ago wouldn’t have been thinkable. I think we’ve done a very good job there and we will continue monitoring the production capabilities, adding new ateliers in France when we think it makes sense and where we think it makes sense,” the executive added.

Asia was by far the main driver of LVMH’s growth in the first quarter, defying concerns over an economic slowdown in China. Excluding Japan, the region posted a sales increase of 17 percent in organic terms. Japan, meanwhile, recorded a healthy 9 percent rise, followed by the United States with 8 percent, and Europe with 7 percent.

The fashion and leather goods division saw stable growth in Europe, increasing growth in China and a slowdown in the rest of Asia, as Chinese government measures to boost domestic consumption prompted its citizens to spend more at home.

Vuitton, along with other major luxury brands, dropped prices in China by 3 percent after a cut in value-added tax came into effect there on April 1.

“The Chinese customer for Vuitton in Q1 was up double digits, in line with what we’ve seen in preceding quarters,” said Guiony.

“Due to the fact that the price gaps between Asia and China have narrowed significantly, we see less growth and less business being done outside China,” he added. “It’s mainly done at the expense of markets surrounding China, and not European markets.”

He noted Chinese shoppers were spending less in Hong Kong and Macau, and had diverted some spending in Europe to the United Kingdom from France, where violent protests by the anti-government yellow vests movement have taken a toll on luxury retail in recent months.

LVMH is keeping up with the changes in tourist flows by relying increasingly on temporary stores. For example, a pop-up shop in Tokyo carrying Virgil Abloh’s debut men’s wear collection for Vuitton in January raked in 30 percent more in the first 48 hours than Vuitton’s collaborative collection with Supreme in 2018.

“That is something we have developed over the last couple of years. We shall do about 100 pop-up stores in 2018 after 80 last year, and this is the privileged way and the main way to drive innovation and newness from a pure retail viewpoint in front of the customer,” said Guiony.

“This trend of pop-up stores is extremely important and we will continue developing that, because it enables us to be talking in a different way to our clients in different places,” he explained. “It adds flexibility to a retail network which, by definition, is a bit rigid.”

And while Abloh is busy racking up accolades, Guiony was keen to point out that Nicolas Ghesquière’s women’s ready-to-wear for Vuitton has been selling equally well.

“We are very satisfied with both the women’s and the men’s business. They are of similar sizes altogether, but the growth rate is more or less the same at very high levels,” he said.

Luca Solca, managing director, luxury goods at Sanford C. Bernstein, estimated ready-to-wear accounts for less than 5 percent of revenues at Vuitton. But Guiony said the category has a halo effect.

“Last year, this business was already very good but it is particularly good this year. It’s not a major business altogether for us at Vuitton, but it’s worth pointing out as this is obviously a traffic generator for many stores and we are very happy that this business is doing particularly well,” said Guiony.