Prada is expanding its Luna Rossa line through a licensing deal with Swiss company Hublot to produce and distribute a branded watch line. 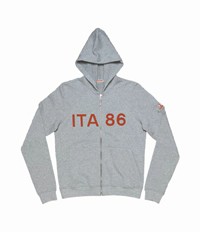 MILAN — With the qualifying round of the America’s Cup fast approaching, Prada is expanding the business of its Luna Rossa line through a licensing agreement with the Swiss company Hublot for the production and distribution of a branded line of watches.

Prada also will start selling Luna Rossa products on its lunarossachallenge.com site this month. And for those willing to be a part of the sailing adventure, the fashion company has signed an agreement with travel operator Alpitour for Luna Rossa-themed trips to Valencia, Spain, where the America’s Cup will take place in July 2007.

“We are relying on an incredible level of brand awareness,” said Giacomo Ovidi, chief executive officer of Luna Rossa. “We want to enhance all categories that are relevant to the brand, in addition to the ready-to-wear collection.”

Ovidi said the Luna Rossa watches are not meant exclusively for sailing. The five-year licensing agreement with Hublot is renewable for another five years and the watches will be available in stores worldwide in October. The Luna Rossa and Hublot brands will appear on the timepieces, but not the Prada or Telecom brands, which own Luna Rossa.

Capitalizing on its sailing experience, Prada introduced a new unisex, technical line of apparel branded Luna Rossa earlier this year. The sailing, sports and leisure collection is named after the America’s Cup yacht controlled by Prada chief Patrizio Bertelli. Ovidi said he plans to reach sales of 20 million euros, or $25.2 million at current exchange, with the brand’s rtw by July 2007. The rtw and accessories collections are currently available at 250 multibrand stores in Italy and 15 in Spain. There is also a 3,564-square-foot Luna Rossa store in Valencia.

There are two main rtw groups that make up the collections: Replica, which duplicates the team’s clothes with the labels of the owners, and accounts for about 6 percent of total sales, and activewear, the less technical division, marked with Italy’s Yacht Club logo.

“I originally thought Replica was not very salable,” said Ovidi. “On the other hand, it’s faring well and it seems young people want to identify themselves with their idols.” There are no traditional retail seasons, as the objective is to integrate outfits that work year-round.

This story first appeared in the June 20, 2006 issue of WWD. Subscribe Today.

The brand’s bestsellers are bags and jackets made with real sails used by Luna Rossa, which is unique, according to Ovidi.

Sails that were used during the last edition of the America’s Cup also were employed to cover the Luna Rossa operative base in Valencia, which was designed by Renzo Piano, himself an avid sailor. The base was unveiled in March. “The effect in the evenings, when it is lit from within, with the bright red Prada and Telecom logos, is quite striking,” said Ovidi. The base covers 54,000 square feet, and is meant to lodge 100 people for the next three years. There are restaurants, gyms and offices, among other facilities.