Ferragamo appears to be reaping the benefits of focusing on accessories, as consolidated sales for 2004 rose 5 percent to $675.7 million. 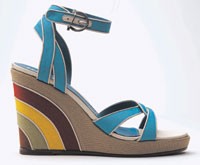 MILAN — Ferragamo appears to be reaping the benefits of its strategy to focus on its core business of high-end accessories.

Consolidated sales for 2004 at the Florentine luxury goods house rose 5 percent to 549 million euros, or $675.7 million, but the company said sales would have risen 9 percent at constant exchange rates. Further breakdowns for the privately held company controlled by the Ferragamo family were unavailable.

In the first quarter of 2005, he said sales rose 10 percent at current exchange rates compared with the same period of 2004 and he was especially perky about Hong Kong, where the 80 percent leap partly stems from Ferragamo’s long-term commitment (it opened its first flagship there in 1988). Sales in the U.S., which is Ferragamo’s second-largest market with Japan, climbed 21 percent.

The Atelier collection, which bowed for fall and features handcrafted accessories imbued with quintessential Ferragamo elements, is also fueling sales. There are 38 models between shoes and bags for pre-spring and the main collection. “The sell-in for this small group was quite significant with it accounting for 5 percent of total sales in only two seasons,” said Ferragamo.

As reported, Ferragamo has added 30 designers, who are mining the archives for inspiration, to boost the successful footwear lineup. Starting with fall, James Ferragamo, Ferruccio’s son, is spearheading the design team for the bags.

The latest novelty is the introduction of a resort collection, starting this season. It was inspired by a cruise down the Bosphorus River and comes in a mix of contrasting textures, colors and geometries.

For the most part, the design team combed through the archives to revise an iconic Ferragamo design, the wedge. For cruise, it comes in napa or metallic leathers, fringed or bejeweled, high or low. Other key styles are high-heeled slingbacks adorned with tiny metallic ribbons or a crisscross version made from leathers with metallic accents. There also is a plethora of ballerina flats crafted in viscose with burnished wicker buckles. Colors range from paprika red to saffron yellow and from magnolia white to coral pink, served up in exotic materials such as ostrich, iguana, raffia, linen and napa.

Ferragamo’s directly operated stores went to 209 in 2004 from 194 the year before. On this year’s agenda is the restyling of boutiques in London, Milan, Rome and Hong Kong. Ferragamo will also open two stores, one in Paris and one in Washington, D.C.

In keeping with its Italian roots, the Ferragamos took part in a cultural extravaganza that ended last Monday and was sponsored by the Tuscan region called Genio Fiorentino, aimed at stimulating high-end tourism in Florence and its environs.

For the occasion, Ferragamo opened its museum and showed guests how a shoe is assembled. Guests were later driven to Ferruccio Ferragamo’s private estate, called il Borro, for a wine tasting. The festivities ended with a fashion show and gala dinner at the family’s Palazzo Strozzi.

“We couldn’t not accept as we’re fervent supporters of the Made in Italy flag,” said Ferragamo. “These quality-driven events recount our artistic codes and aesthetic values, one of the nonreproducible pluses of this country.”