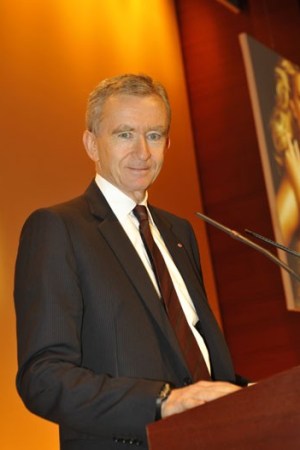 This story first appeared in the February 6, 2009 issue of WWD. Subscribe Today.

In fact, he said Louis Vuitton, which kept a double-digit sales pace in the quarter, would open more than 25 stores this year, and that the world’s largest luxury group would not cut its advertising spend as it seeks to win market share and keep the luxury dream alive.

“January was not a bad month — far from it,” Arnault told analysts and journalists at LVMH headquarters here Thursday, as images of the group’s celebrity spokesmodels — from Monica Bellucci to Leonardo DiCaprio — flashed behind him. “Having said that, visibility for the year is limited.”

To wit, the company gave no precise guidance for 2009 earnings or revenues.

LVMH’s net profits in 2008 totaled 2.03 billion euros, or $2.98 million, on a revenue rise of 4 percent to 17.19 billion, or $25.23 billion. Dollar figures are converted from euros at average exchange rates for the corresponding period. LVMH did not break out fourth-quarter figures.

Based on calculations by WWD, sales for the three months ended Dec. 31 rose 10.2 percent for fashion and leather goods; 5.7 percent for selective retailing and 2.2 percent for perfumes and cosmetics. Sales of wines and spirits fell 5.6 percent, while watches and jewelry were down 8.6 percent.

Sounding relaxed and confident, Arnault didn’t mince words about the gravity of the economic downturn, “something we haven’t seen in the 20 years we’ve been running this group.”

He mentioned one minority of economic experts who warn the crisis could last three to six years. “Let’s hope they’re wrong,” he said. “We’re lucky enough to have a sound balance sheet, which gives us room to maneuver in what is a difficult environment.…We will come out of this crisis in a stronger position.”

Arnault said that in 2009 the business would be run with a financial discipline expecting the worst, and “if we have been too pessimistic, we can only be pleasantly surprised.”

Tight cost control was a recurrent theme at the meeting, and LVMH said it is mulling staff reductions in its watch and jewelry division, which saw business fall off in the holiday period. Arnault said LVMH is still discussing the restructuring with unions and suggested any reductions would be “low.”

He called the watch and jewelry business cyclical, notwithstanding the economic situation, characterizing the current one as “a disaster. Yet we’re pulling through,” he said.

Arnault took a shot at American department stores for steep markdowns well ahead of Christmas, and touted Vuitton’s no-discount policy as a boon during the holiday period. “When you buy someone a present from Louis Vuitton, it doesn’t lose half its value over the coming weeks,” he said.

Strong sales and profit performances by fashion and leather goods and perfumes and cosmetics outpaced wines and spirits in 2008, with Champagne sales taking a hit in the economic downturn, particularly in the U.S. and Japan.

Most geographic regions logged revenue growth last year in local currencies, with Asia up 19 percent, Europe up 7 percent and America up 2 percent.

Fashion and leather goods did particularly well: up 9 percent in local currencies in the U.S. and Europe and up 27 percent in Asia.

By contrast, group sales dropped 10 percent in Japan, beset with a sluggish economy.

Yves Carcelle, chief executive officer at Vuitton, cited strong momentum for the brand among consumers in China, now the brand’s second-largest market worldwide, accounting for 20 percent of 2008 revenues. Vuitton ended the year with 425 stores and aims to christen new Maisons, which carry all product categories, in London and Rome this year.

Fendi logged profitable growth in 2008, with rapid progress in Asia and Europe, ending the year with 180 stores. Carcelle also highlighted a record year at Donna Karan despite a difficult fourth quarter.

In 2008, perfumes and cosmetics logged growth in all markets in local currencies: up 20 percent in Asia, 10 percent in the U.S. and 3 percent in Europe and Japan.

“There was market-share growth all over the world,” said Antonio Belloni, group managing director. “Revenues also grew in a balanced way.”

For 2009, Belloni said the focus would be on market share gains, with priority given to countries with strong potential. There will be a push to expand Kenzo and Make Up For Ever in China and a launch of Benefit in Russia, for instance.

Strong momentum in sales and profitability at Sephora fueled growth in selective retailing, with the perfumeries adding 142 locations to bring the network to 898 stores in 23 countries. Expansion is to continue, bringing the chain beyond the 1,000-store count, Belloni said.