Shares in the world’s biggest luxury group closed up 5.5 percent, as the impact was less than markets had feared.

Magnet for luxury retail: Hong Kong attracts luxury retailers from the U.S. and around the world due to the city’s abundance of affluent, educated consumers.

PARIS — LVMH Moët Hennessy Louis Vuitton saw a 25 percent drop in business in Hong Kong in the third quarter as tourism plummeted in response to nearly four months of violent antigovernment protests — and it expects no improvement soon.

But shares in the world’s biggest luxury group closed up 5.5 percent on the Paris Stock Exchange on Thursday, bringing their rise so far this year to almost 49 percent, as markets expressed relief that the impact was not more pronounced.

Jean-Jacques Guiony, chief financial officer of Louis Vuitton, said the loss in business would hit the group’s profits, and its brands were in conversation with landlords to renegotiate their rent contracts in a bid to cut fixed costs in the blighted region. Nonetheless, he expressed confidence Hong Kong would eventually rebound.

“The 25 percent drop in Hong Kong in Q3 was a combination of a flattish month in July and around 40 percent drops in August and September, so definitely the trend has been worsening throughout the quarter,” Guiony told a conference call the day after LVMH reported a 17 percent jump in third-quarter revenues.

As the first luxury firm to publish quarterly results, LVMH is viewed as a bellwether for the rest of the industry. The unrest in Hong Kong could have a negative impact of between 0.6 and 1.2 percent on global luxury growth this year if the fourth quarter is as badly hit as August and September, Bernstein said in a recent research report.

It estimated Hong Kong accounts for 5 to 10 percent of global luxury sales — in the higher end of the range for hard luxury, and in the lower end for soft luxury. Bernstein said it assumed the sales decline in the third quarter was 50 percent in Hong Kong, and that there would be no change in the fourth quarter.

Analysts estimate that Hong Kong accounts for around 6 percent of LVMH’s overall revenues. Guiony said the group had no hard evidence that the lost business was being redirected to other parts of Asia. “We haven’t seen many countries booming as a consequence of this situation. It’s very difficult to draw any correlation between the various geographies, particularly in Asia,” he said. 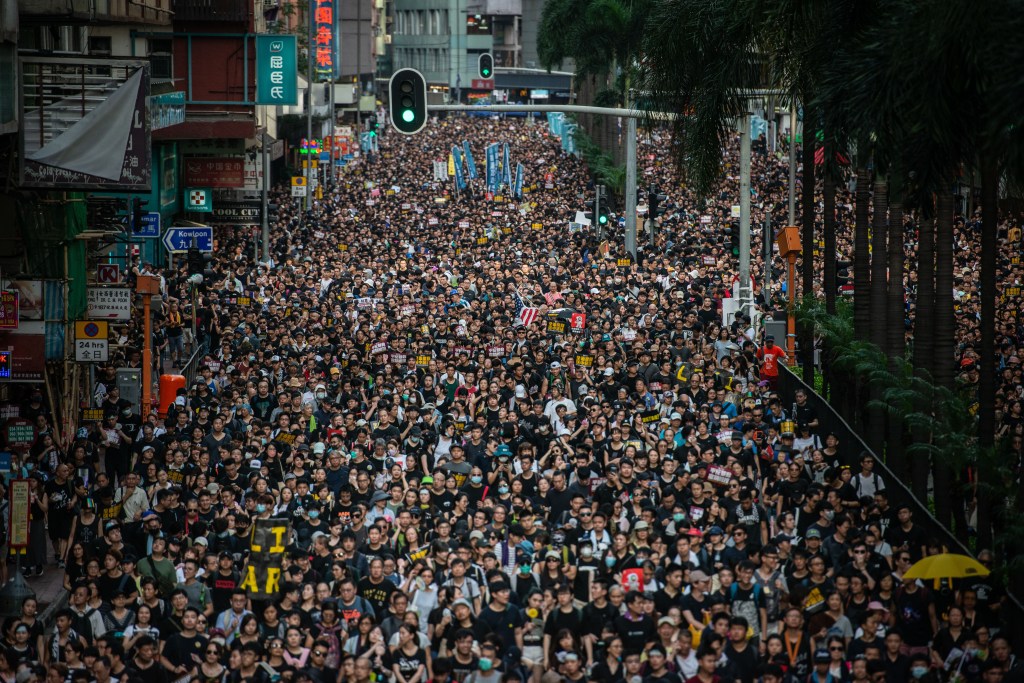 In Hong Kong, the wholesale business fared better than retail operations, namely fashion, leather, jewelry and duty-free operator DFS, which makes an estimated 45 percent of its sales in Hong Kong and Macao, according to analysts. Revenues at DFS were “slightly negative” in the third quarter, Guiony said.

“This is a profitable area and we will suffer badly due to the fact that most of the businesses have fixed costs there and will experience much lower revenues,” he predicted. However, he noted the region had recovered from previous crises such as the SARS outbreak in 2003.

“It’s out of the question that we consider Hong Kong as something that may not be a strong business center in the years to come. They are undergoing some difficulties for the time being, but we are fully confident that at some point they will recover,” he said.

Elsewhere, LVMH’s business is booming on the back of continued strong demand for its Louis Vuitton and Dior brands among Chinese, American and European consumers. As reported, the key fashion and leather goods division saw organic sales rise by 19 percent in the third quarter, sharply exceeding consensus estimates.

Vuitton enjoyed “excellent momentum” driven by all its businesses, with a pickup in demand by Chinese tourists in Europe. The group has expanded its production capacity with the opening last month of a new leather goods workshop in France, and has extended its “Louis Vuitton X” exhibition in Los Angeles by two months.

Dior registered good growth in all product categories, as well as an “excellent” response to the opening of its flagship on the Avenue des Champs-Élysées during the renovation of its historic Avenue Montaigne boutique. Loro Piana, Loewe, Rimowa and Berluti performed strongly, LVMH reported.

While Celine is poised to launch its first perfume collection under creative director Hedi Slimane, the brand has yet to reap the benefits of the full creative revamp he instigated last year, Guiony said.

“The initial signs of clients’ response to the new offer are positive and particularly in terms of traffic, but yet it will take some quarters — and I don’t know how many — before the branding and the new products planned bear full fruit. I will probably make the same answer for a number of quarters,” he said.

Wines and spirits were up 8 percent in the third quarter, fueled by growing U.S. demand for cognac and spirits. Guiony said LVMH would be cautious in its response to new U.S. tariffs on French wines, and will “think twice” before raising prices.

Perfumes and cosmetics recorded organic growth of 7 percent, below consensus estimates. “The big drop is definitely the U.S., where the whole industry, in my view, has been caught by surprise with the drop in the makeup business, which used to be thriving for the last 10 years and suddenly became negative in 2019,” said Guiony.

Watches and jewelry grew 5 percent, as Bulgari maintained its momentum despite its heavy exposure to Hong Kong, while selective retailing, which includes DFS and beauty retailer Sephora, was up 4 percent.

Sephora posted double-digit same-store growth in Asia and the Middle East during the quarter, versus low- to mid-single-digit growth in Europe and the U.S., Guiony said. It opened its first store in Auckland, New Zealand, in July, followed by Hong Kong in September, and South Korea is next in the cards.

DFS, meanwhile, will gain a foothold in Paris when LVMH reopens landmark Paris department store La Samaritaine next year as a multi-use project including a Cheval Blanc hotel. While declining to confirm the date of the reopening, Guiony said the cost of the launch would be limited.

“The first months of business will be loss-making, as it is obviously the case for each large opening, but that’s something that we shall be budgeting within the DFS numbers and we don’t expect something particularly meaningful there,” he said.