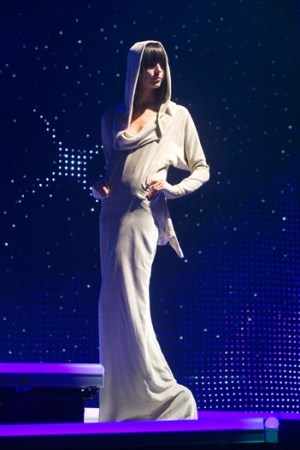 This story first appeared in the August 26, 2008 issue of WWD. Subscribe Today.

This year’s event, an Eighties tribute themed “Pop Candy Arcade,” drew 3,000 guests and raised $250,000 for the Art Institute of Chicago.

On stage later, Lauper was barefoot delivering infectious dance beats like “Into the Nightlife” before open-shirted hunks adoringly fit her with shoes, making her swoon. She got a second wind for “Girls Just Want to Have Fun” as the audience bopped right along.

Hammer skipped through a few hits including “U Can’t Touch This,” obliging the 46-year-old to break out his signature shuffle, drawing loud whoops and pulling people to their feet. For “Too Legit to Quit,” Hammer was joined by his 20-year-old daughter A’Keiba Burrell, whose vocals infused a rhythm-and-blues vibe to the hard-driving rap song.

Peppered between performances were eight fast-paced runway shows, emphasizing a mix of the highly accessorized Eighties and all the gloves, boots and crimped hair styles that shaped the decade, as well as current fashions. Donna Karan Collection, backed by George Michael’s sultry version of “Roxanne,” was a crowd pleaser. Luxe dresses featured gathered touches and jackets were highly structured.

Another favorite was Marc Jacobs, whose collection ranged from a body-skimming, hooded gown that dripped onto the floor, to an oversize cocoon white coat and short-cropped tops.

Backing each runway show was a massive LED curtain (resembling a huge Lite Brite toy) with changing graphics. The technology has not been seen in the U.S. before, according to Martine Reardon, executive vice president of Macy’s corporate marketing.

Afterward, guests trundled one block for a party on the seventh floor of Macy’s State Street flagship. Well-worn Eighties’ arcade machines like Pac-Man and Millipede reminded fans of a time before e-mail and BlackBerrys. A giant interactive piano from the 1988 Tom Hanks movie “Big” drew plenty of foot traffic while pop hits “Tainted Love,” “Whip It” and “Mickey” kept the strobe-lighted mosh pit bouncing.

Shouting against the music, Macy’s East chairman Ron Klein said he had no illusions about solving Rubik’s Cube and refused to try. He is trying to woo more shoppers to Macy’s in Chicago. “Any business leverages its potential by allocating resources, whether that is inventory or capital or technology or most importantly, human capital and intellectual horsepower,” he said. “And customers in Chicago will see the impact of our reallocation of those resources over the next year.”

That means merchandise mix and store modifications tailored to local markets, he added. That task will be easier, Klein said, now that Macy’s regional office has been relocated from Minneapolis to Chicago.

“The Chicago downtown customer has different demands than the [suburban] Oak Brook customer,” he said. “Our business model necessitates that we respond to a customer who is constantly changing, or we’re dead.”