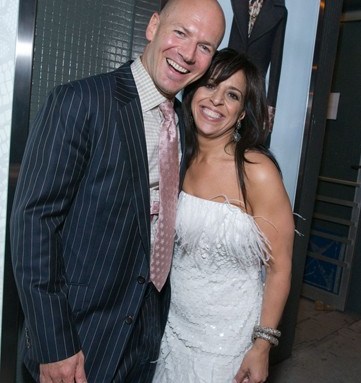 After rebounding from an illness that left her bedridden for six months, a case of employee embezzlement and filing for bankruptcy, Pinto rebuilt her design business piece by piece and client by client until forces began to shift.

Now, she’s the favored designer of Michelle Obama (who Vanity Fair nicknamed “our Commander in Sheath”) — dressing the potential first lady and her two daughters for everything from the day Barack Obama launched his presidential campaign to the night she famously knuckle-bumped him clad in a purple Pinto silk sheath dress and Azzedine Alaïa belt as he claimed the Democratic nomination.

Pinto plans to capitalize on the moment, opening her first retail store in Chicago’s West Loop neighborhood earlier this month, providing designs not only for Obama but another prominent Chicagoan, Oprah Winfrey.

“It’s like ‘The Tipping Point,’” Pinto said. “There’s a moment when things start to move and we’re in the moment. It’s 16 years of working in this business, it’s getting sick, it’s the embezzlement, the bankruptcy. It’s Barneys and Saks buying pieces. It’s all those things coming together.”

Pinto, who’s known for her eye-catching eveningwear and artistic wraps which have been sold at Barneys New York and Saks Fifth Avenue, said opening her 2,100-square-foot store at 133 North Jefferson Street represents a pivotal point in her comeback.

Windy City partygoers seem to agree. They numbered in the hundreds, spilling out onto the street as Pinto’s store opening party earlier this month proved too crowded for some of the well-heeled set. Obama was not in attendance. She was said to be vacationing with her family in Hawaii.

Pinto, meanwhile, in a white strapless dress trimmed with feathers, relished the moment.

“I didn’t know how it was going to unfold, but I knew I would be back,” she said. “Those are things that formed me. I think because of those experiences I have a greater appreciation for everything that’s happening.”

In the store, which has gray bamboo floors, crystal chandeliers and curvy upholstered chairs, prices begin at about $300 for simple silk tops, scarves and wraps, with trousers starting at $500 and jackets at $750 with dresses running from $1,200 to $5,000 for a hand-beaded evening gown. She expects to generate $2 million in volume the first year.

It’s no doubt been a winding road for Pinto. The graduate of the School of the Art Institute and one-time assistant to Geoffrey Beene initially launched her business in 1991, specializing in eveningwear and accessories, some of which were picked up by Bergdorf Goodman. Then a combination of factors, including Sept. 11 and an employee embezzling $300,000, forced Pinto to file for bankruptcy and shutter her roughly 10-year-old business in 2002.

During that time, she was bedridden for six months with peritonitis due to a surgical error, but was determined to come back. Pinto relaunched the business in 2004, the same year she met Obama, whose husband was running for the Senate. Now Pinto says Obama, who has helped build the brand, is just like any other client — almost.

“She’s like an average customer,” Pinto said. “She’ll say, ‘Oh, I like that dress.’ She’ll buy one piece or several.”

And while Pinto is quick to point out that she’s not Obama’s stylist, nor does she dress Obama for specific events, designing an inaugural gown would be different.

“She [Michelle] referred to it, saying, ‘Make sure Maria gets that dress designed,’ but we’re not going to talk about it yet,” Pinto said. “We don’t want to jinx anything.”