The economy, the credit markets and the courts may all be hurdles, but it appears nothing, including a tornado, can stop development in Atlanta. 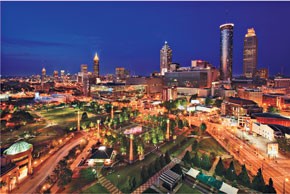 The economy, the credit markets and the courts may all be hurdles, but it appears nothing, including a tornado, can stop development in Atlanta.

Since the Civil War, Atlanta has developed a reputation for building and rebuilding, which has served it well for the past 140-plus years.

Atlanta is the retail and economic engine for the state of Georgia. From 1995 to 2005, Georgia’s retail sales grew 89.5 percent to $123 billion, and buying income increased 67.9 percent to $167 billion, according to the Metropolitan Atlanta Chamber of Commerce.

It’s no wonder that dozens of mixed-use projects are planned and under construction in Atlanta. Rapid growth in the past 20 years led to suburban sprawl and legendary traffic. Now developers are moving closer in, with major new mixed-use developments in Downtown, Midtown and Buckhead.

But many multiphased projects planned over the past decade during better times are now faced with the harsh realities of a flagging economy. Some, from looming recession and tight credit markets to cautious retailers and consumers, mirror national concerns, while others are specific to Atlanta.

While the local population is growing, the job market is slowing somewhat. The housing sector, in terms of new homes and prices, is also declining, though much less than it has in neighboring Florida.

An unprecedented Downtown tornado the night of March 14 did damage surpassing $150 million to Atlanta landmarks, including the CNN center, the Georgia World Congress Center and the Georgia Dome. Repairs are under way, mostly replacing blown-out glass. Officials said the biggest imperative is getting the Georgia World Congress Center, which hosts many of the city’s conventions, up and running, though it is unclear when it will reopen.

Downtown tourist attractions like the Georgia Aquarium and World of Coca-Cola, which opened in the past two years and draw millions to the area, escaped damage.

“The tornado won’t be a long-term problem for developers or the economic welfare of the city,” said A.J. Robinson, president of Central Atlanta Progress, a private, nonprofit business development group.

Robinson acknowledged that the economic climate for developers in general “is not great,” but stressed the mission of developing Downtown as a viable retail center.

“Like boxers, Atlanta’s developers are feeling punched with a right, then a left,” said Steve Labovitz, partner in McKenna Long & Aldridge, a legal firm that represents developers. “They are jittery about a credit crunch, the economy, financing, higher construction costs, the court decision — everything is creating a perfect storm.”

Projects in areas designated as Tax Allocation Districts have previously used such monies to fund infrastructure and other improvements. The ruling effectively limits the funding available to developers to help with their projects.

Last month’s ruling could limit funds for approximately 20 projects planned in two designated districts in the city. One high-profile project, Allen Plaza, is a 12-acre, nine-block mixed-use development in Downtown and is in its second phase.

Hal Barry, chairman of Barry Real Estate, said the project suffered “absolutely no damage,” from the tornado, although it was in the storm’s path. Financing and credit is another story.

Public funding — approximately $78.6 million for infrastructure improvements — could be cut in half, due to the court ruling.

“I was blindsided,” said Barry. “The economy’s up and down, and financial markets are dicey. We needed help to accomplish this vision to revitalize Downtown. Without access to adequate funding, it will be much more difficult.”

The Sembler Co., an Orlando, Fla.-based developer with 128 shopping centers (over 23 million square feet of retail) in the Southeast, has 10 Atlanta projects planned or under construction, with five existing centers in the area.

Jeff Fuqua, president, said leasing efforts have stalled in recent months as the economy has slowed. Some projects may be delayed, and at least one has been significantly downsized.

“All retailers are hesitant about expanding now, but it’s more pronounced in apparel, especially the big apparel chains, and it all happened so suddenly,” he said, referring to the post-holiday period. “Our projects that are already leased are fine, but those in the planning stages may be pushed back a quarter.”

While a vehement anti-development campaign fought Town Briarcliff, in northeast Atlanta, Fuqua blamed economic factors for its downsizing. Town Briarcliff, one of its largest mixed-use proposals, was begun two years ago. The 107-acre development planned 1.5-million square feet of retail, but scaled back to 80 acres, and 900,000 square feet.

Meanwhile, Daniel Corp. is developing 12th & Midtown, a multiphase, $2 billion project that is the cornerstone of the Midtown Mile, a 14-block area, which will create 1 million square feet of street-level retail by 2010.

“Players with good fundamentals will be fine, but marginal players may be weeded out,” he said.

Baille said the desirability of Midtown, with its cultural attractions, neighborhoods and parks, continues to override the effects of economic downturns.

Developer Ben Carter also is confident that the glamorous lure of his Streets of Buckhead, dubbed the “Rodeo Drive of Atlanta,” will outweigh any short-term snags.

“I’ve built two regional malls during recessions, and I’d rather be in construction than opening stores in a recession,” said Carter, founder of The Streets of Buckhead, a $1.2 billion mixed-used project, which will open phase one in late 2009.

“I haven’t noticed a real slowdown among luxury retailers,” he observed. “They may have some immediate concerns, but they are confident about long-term prospects for the Atlanta market and the U.S. economy.”

Despite the challenges, developers are still announcing long-term plans, some quite dramatic, for the city.

This month, Jim Jacoby, chairman of Jacoby Group Development, the visionary behind Atlantic Station, announced a 6.5 million-square-foot retail and office project near the Hartsfield-Jackson airport. The 122-acre project will be on the site of a former Ford assembly plant that closed in October 2006. It will include 1.6 million square feet of retail, and 2 million square feet of office space.

With close proximity to the airport, the project is poised to serve increased international traffic from a $6 billion airport improvement and expansion currently under way. It includes a new international terminal at the world’s busiest airport, which has 8.5 million passengers annually.

The project will have “three kinds of retail — neighborhood, regional and international, to serve the growing international traffic at the airport,” said Jacoby. It will break ground this June and is slated to be completed by 2020.

“Atlanta is a real estate town,” said Robinson of Central Atlanta Progress. “Developers are creative people. They will figure it out.”