Men’s Wearhouse took a big hit as it tried to steer a less promotional path for Jos. A. Bank. 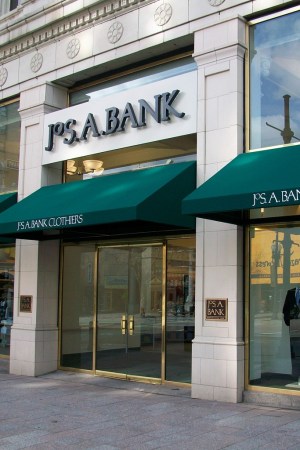 Shares of Men’s Wearhouse Inc. were hit hard again Wednesday as the company unveiled steep losses for the third quarter, but chief executive officer Doug Ewert stood his ground, reaffirming his commitment to keep Jos. A. Bank off the promotional treadmill.

That could also come with some serious changes, including the creation next year of a holding company called Tailored Brands that would house all the company’s businesses so they could share back office functions.

Men’s Wearhouse stock dropped by close to 20 percent to around $15 in after-hours trading, illustrating Wall Street’s extreme skepticism and the work still to be done at the men’s wear retailer.

“When we acquired Joseph Bank, we knew that we needed to correct the promotional model,” Ewert said. “We underestimated the impact to the near-term performance as we began to execute the difficult, but necessary, corrective steps. We remain confident that these steps will restore a long-term, sustainable, profit model and reshape the business for a healthy and growing Jos. A. Bank.”

That could be a big job and could include store closures.

Through the first week of December, Jos. A. Bank’s comparable-store sales fell 35.1 percent. If that trend continues, the company said it could miss its already reduced financial guidance for the year. Last month, Men’s Wearhouse warned that earnings per share this year would range from $1.75 to $2, instead of the $2.70 to $2.90 projected before that.

Net losses totaled $27.2 million, or 56 cents a share, in the third quarter and compared with year-ago earnings of $6.8 million, or 14 cents. Results for the quarter included a $90.1 million impairment non-cash charge against the value of the Jos. A. Bank trade name.

Ewert is looking hard at the Jos. A. Bank business.

“We are currently performing a deep dive on data analysis using both our customer data and a third party to uncover actionable insights,” he said. “With the top-line resetting to a lower level for the near-term, we are looking at every opportunity for cost reduction including store rationalization, labor, advertising and all relevant shared service costs and we are partnering with Alix Partners on specific elements of this work. We are challenging all assumptions and are fully focused on accelerating the Jos. A. Bank recovery.”

The combination of the two key men’s wear specialty players was rocky even before it started.

First, it was Bank vying to buy its larger rival for $2.3 billion in fall 2013, just months after Men’s Wearhouse’s booted founder George Zimmer after a boardroom struggle.

Men’s Wearhouse shrugged off the bid, but eventually turned around and tried to buy Banks for $1.5 billion, later raising the offer to the sale price of $1.8 billion (about double the current market capitalization of the now-combined company, which was nearly $900 million at Wednesday’s close). The back and forth ultimately led to what many saw as an awfully big price tag for the Jos. A. Bank business.

Together, the two nameplates were seen lagging only Macy’s, Kohl’s and J.C. Penney in men’s wear volume.

When the deal was struck, Ewert said: “Together, Men’s Wearhouse and Jos. A. Bank will have increased scale and breadth, and Jos. A. Bank’s strong brand and complementary business model will broaden our customer reach. We expect the transaction will be accretive to Men’s Wearhouse’s earnings in the first full year.”

Despite operating in the same market, the two retailers have long had different styles, with Bank being much more promotional.

That big step down reflected what the company last month described as “significant comparable-sales weakness at Jos. A. Bank….During the third quarter, comparable sales decreased 14.6 percent at Jos. A. Bank, far below the company’s earlier expectations. This decrease was primarily driven by a decline in traffic as the company began the transition away from the Buy-One-Get-Three promotional events.”

Investors punished the stock, pushing it down more than 40 percent on the day after the warning.

Analysts ranged from cautious to bearish and many observers cited the difficulties of retaining customers after turning off the promotional spigot, pointing to J.C. Penney’s experience under Ron Johnson, who tried to go to a steadier pricing model that was roundly rejected by consumers.

Whether that comparison is apt remains to be seen, but it’s clear Men’s Wearhouse still has a long way to go still.

A WWD study of the top fashion stock decliners earlier this month showed that of the 100 shares in the WWD Global Stock Index, Men’s Wearhouse showed the sixth-steepest decline over the prior 12 months, dropping 55 percent.