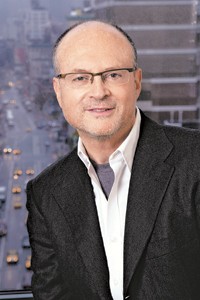 NEW YORK — With the wind at its back, J. Crew Group Inc. is set to launch its much-anticipated initial public offering today.

The company planned to issue 18.8 million shares, at $20 a share, or $376 million, to pay down its $352 million in debt and propel further growth. The offering is being led by Goldman, Sachs & Co. and Bear Stearns & Co.

J. Crew Group has been controlled by the private equity firm Texas Pacific Group for the last nine years. With the offering, the company will have 56.9 million shares outstanding, with an estimated value of between $850 million and $1 billion, according to the prospectus. The company declined comment as of press time Tuesday.

While J. Crew delayed an offering last fall, the timing for the IPO now appears more opportune. Some analysts and fashion companies are expecting an improvement in the IPO market in the second half. BCBG, for example, has hired Goldman and Citigroup as financial advisers for a possible public offering.

J. Crew has gained additional momentum in the last six months, coming off a winning spring season, and there is a lot of confidence in the brand’s leadership.

The company foundered for years, making it difficult for Texas Pacific to recoup its investment. But the retailer’s performance has noticeably improved in the past year. J. Crew has been turned around by Millard “Mickey” Drexler, chief executive officer, and Jeff Pfeifle, president. They both joined the brand three-and-a-half years ago, with Drexler making a $10 million investment in J. Crew at the time. With his stock grants, he owns 22 percent of the company. He does not plan to sell any of his shares as part of the IPO.

J. Crew’s better financial results are based on a merchandise overhaul, marked by preppy, quirky and colorful styles and an emphasis on Crew’s whimsical and signature pieces, such as the Legacy blazer, Italian cashmere sweaters and broken-in chinos. There also has been new sourcing and a switch to higher-grade mills for production.

On top of this, the company has been adding higher price points and layering in categories, including more tailored apparel, accessories and occasion wear.

When Drexler and Pfeifle joined the company — Drexler was ceo of Gap Inc. and Pfeifle was a close associate there — they greatly reduced staff size and costs and spent months purging the company of inferior product. While the cost-cutting and merchandise overhaul initially impacted financial results, the costs of running the business have been shrinking as a percent of the sales base, which has been growing rapidly.

Beyond its traditional strength in sportswear, the brand has seen robust growth recently in accessories, as well as bridal-related clothing. Children’s wear, called Crewcuts, launched this past spring with a store in NorthPark Center in Dallas. Children’s wear is potentially a separate retail chain.

In addition, Madewell, a more casual, lower-priced line than J. Crew and potentially a major chain, is being launched this fall. Madewell is a women’s-only, item-driven collection focused on “timeless and ageless” casual merchandise and priced 20 to 30 percent lower than J. Crew. It could eventually go beyond women’s into men’s wear. The first Madewell store will open in NorthPark Center in August. The second will be in a major mall in Los Angeles. Though Madewell, a former work clothes line from Boston, is being developed by J. Crew, no connection will be apparent to consumers.

“The lower the price point in a business, the bigger it can be,” Drexler said in a recent interview.

Madewell and Crewcuts won’t have much impact on the J. Crew business any time soon, considering they’re so new. But start-ups and brand extensions are attractive to investors who are very demanding when it comes to growth.

“This shows innovation,” said Isaac Lagnado, president of Tactica.com, a research and consulting firm. “Some of these satellites in other companies have turned out to be big contributors in time, like GapKids.”

Lagnado added that J. Crew’s turnaround is impressive. “A repositioning is a very difficult process. It’s much harder than a first introduction.” He noted that Gap has struggled to turn around its operations, and some specialty chains, such as Casual Corner, struggled for years to turn around, but never made it and turned to liquidation.

The view on J. Crew is positive. “Ultimately, the stock will be a success story,” said one Wall Street analyst. “J. Crew has Mickey Drexler running the show. It’s a growth retailer and clearly Mickey knows how to run a growth retailer, given the past success of Gap. Someone like Mickey Drexler will add a few points to the valuation just because of who he is.”

He added: “There is so much money coming into these hedge funds, you need to put the money to work somewhere. So now here is an opportunity to buy into a retail stock that perhaps is cheap.”

J. Crew reported growth in profits and sales for the first quarter ended April 29, including a 23 percent gain in operating income to $28 million from $23 million in the year-ago period. Net income rose 60 percent to $8 million from $5 million.

Selling was strong as same-store sales increased 12 percent for the quarter. The double-digit boost came after a 37 percent comps jump in the year-ago period. Total revenues for the 13 weeks increased 14 percent to $240 million from $211 million.

The first J.Crew store opened in 1989 at the South Street Seaport in New York City. The brand currently has 167 retail stores and 48 outlets. Jcrew.com was launched in 1996.