Milan Fashion Week kicks off on Feb. 22 against the backdrop of a country evolving under the watch of a new government. 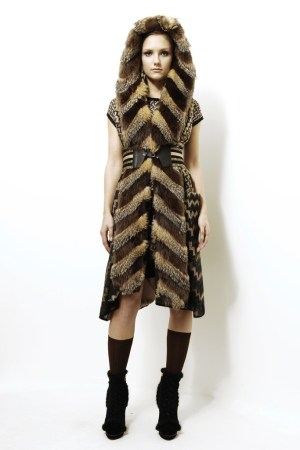 Milan Fashion Week kicks off on Feb. 22 with the Gucci show and closes on Feb. 27 with the Giorgio Armani and Roberto Cavalli collections against the backdrop of a country evolving under the watch of a new government.

Since last season, Prime Minister Mario Monti has succeeded Silvio Berlusconi, and he has been working toward moving Italy forward, taking steps to reestablish its role within the euro zone.

Consumer spending has fallen off, as Italians are pressured by tax hikes, higher gas prices and a rising cost of living. The credit crunch has been tough on small and midsized companies, and while there is some hope for change with Monti’s appointment at the end of last year, there’s also been a backlash against measures to restore the country, which is weighed down by a debt of 1.9 trillion euros, or $2.5 trillion at current exchange, as unions fight new labor rules and pensions increasingly appear as a mirage.

Fighting tax evasion has been a priority over the past few weeks, with sweeps targeting ritzy resorts such as Cortina d’Ampezzo or Portofino. Consequently, there has been a drop in demand for luxury cars like Ferraris and Lamborghinis, because the wealthy do not want to call attention to themselves with the tax authorities.

“There is no enthusiasm in Italy. It suffers from a general uncertainty, and people are afraid of showing they can spend,” said Vittorio Missoni, chairman of the family-owned fashion company that bears his surname.

Despite the challenging environment, Missoni said the company saw a 15 percent rise in sales in Italy, but the executive attributed the gains to tourists from Russia, the United Arab Emirates, South America and the Far East shopping in the country’s historical cities. Indeed, Italian fashion brands are increasingly relying on rich tourists flocking to Italy as local spending has been dwindling.

To further court these customers, Missoni plans to open a boutique in Saint-Tropez, on the French Riviera, in the spring. “Glamorous venues, where international tourism is a draw, are top of mind,” said Missoni.

Another priority is to create products that will “last longer,” that will have an iconic status and that are never to be discounted. “Seasonality is an issue,” he said.

According to the Italian Chamber of Fashion, the Italian fashion industry expected to close 2011 with sales of 63.5 billion euros, or $88.2 billion at average exchange, up 5 percent compared with the previous year, lifted by the performance of leather goods, footwear and exports. This is despite the difficulties in the last quarter of 2011, hurt by the debt crisis in European countries such as Italy, Spain and Greece.

However, the industry forecasts a 5.2 percent drop in revenues in 2012 to 60.2 billion euros, or $80 billion at current exchange, in light of the measures taken by Monti to set Italy back on track, such as a reduction of 21.7 billion euros, or $28.8 billion, in total household income next year, and a decrease in apparel spending between 1.5 and 2.5 percent.

Mario Boselli, head of the Italian Chamber of Fashion, said the industry was concerned about 2012 replicating the “vertical drop in business” seen in 2009. “This will not happen, though, as companies are more structured, flexible and efficient compared to three years ago, and better equipped to manage complex operations,” he said. He also underscored that the crisis is less global and more concentrated in Europe, compared with 2009.

Gian Giacomo Ferraris, chief executive officer of Versace, mirrored Boselli’s words. “This is a resilient brand. The markets are full of perils, but we have strengthened our defenses and we can tackle them in good health,” said Ferraris. He expects Versace’s 2011 sales to reach 340 million euros, or $472.6 million, and he sees double-digit growth in 2012, 2013 and 2014, “barring traumatic events.”

Also, the Italian brand has returned to profitability in 2011. Ferraris was cautious about Italy, where he doesn’t foresee a pickup in business, but with the fall collection, Versace has reentered the Japanese market, and the executive sees “great opportunities” in Korea, Southeast Asia and China, in Latin America (Mexico, Colombia, Chile and Brazil), South Africa, Morocco and Egypt. The company plans to invest in retail in cities in mature markets, too, where it is still “not present enough,” as in London, Paris, or New York, where it will open a store in June, and will approach for the first time cities such as Istanbul, Prague and Budapest.

Giorgio Armani recorded a solid year in 2011, according to Fabio Mancone, head of communications and licensing at Giorgio Armani Group.

“Our revenues grew by mid-double-digits, confirming our solid path to sustainable, profitable growth,” he said. “The 2012 outlook also seems to align on the same track. While we keep focusing on our core business, the breadth of our initiatives is also expanding: If the highlight of 2011 was the opening of the Armani Hotel Milano, which brought to life the essence of the Armani brand aesthetics, 2012 will be marked by a few critical initiatives, as well.”

“As official outfitters of the Italian Olympic Team, we will undertake a major marketing and communication campaign, ranging from multimedia advertising and p.r., to in-store and public events,” he said.

The company plans “a strong push” in leather accessories. “This is a core strategic gap opportunity for us to fill, and we have put in place new organization, talent, resources and communication strategies to position Giorgio Armani and Emporio Armani as serious contenders in an ultracompetitive marketplace,” he noted.

The firm will continue to expand in the Asia-Pacific region, in particular in Hong Kong, China and Korea, as well as in Europe and the U.S.

“While we accelerate our penetration in newer, fast-growing areas, we still believe there are opportunities to tap in our more established markets,” said Mancone. Giorgio Armani and Emporio Armani stores will open in Paris, Düsseldorf, Vienna and Berlin, among other cities. A second Emporio store, with a new merchandising concept, just opened its doors on Rue Saint Honoré in Paris.

The first Giorgio Armani store will be inaugurated in Berlin during the city’s international film festival this week. “We are also completely revamping our Manhattan store at 760 Madison Avenue, one of the largest and most dramatic Giorgio Armani stores in the world,” added Mancone.

Other priorities are strengthening licensing agreements and further developing e-commerce and digital communication, following the launch in October of the new armani.com site with all brands available for online shopping.

Retailing is also a priority for Roberto Cavalli and the Aeffe group.

Cavalli has set up a new branch in China, and the first store in that country will open in Beijing in March. Ceo Gianluca Brozzetti said the company plans to open 15 stores in 2012, including stores in New Delhi; Madrid; Munich; Saint Petersburg, Russia; in Paraguay’s Ciudad del Este, and an in-store shop in Tokyo’s Isetan.

At the end of 2011, there were 128 company stores, of which 77 were Roberto Cavalli banners. “Italy is difficult and the second half of 2011 was difficult, but sales nationally account for no more than 20 percent of total revenues,” said Brozzetti, adding he was generally “cautious” about 2012.

The company is pushing the accessories category through a new handbags license and has created a dedicated division to increase the offer. “Apparel remains very important for us, but we will see shoes, bags and men’s wear grow,” he said.

Business will also expand through licenses, including the first home collection to be presented at Milan’s international furniture and design show, the Salone del Mobile, in April; a fragrance with Coty bowing in the spring; new watches co-branded with Franck Muller, and the new Just Cavalli line licensed to Staff International. Leveraging on the home collection, three new Cavalli Cafés will open in 2012 — in Beirut, Doha and Kuwait — as well as two new Clubs in 2012, in undisclosed cities.

Massimo Ferretti, chairman of Aeffe, which controls the Alberta Ferretti, Moschino and Pollini brands and produces collections for Jean Paul Gaultier, Cacharel and Cédric Charlier, said the company’s focus is on retail. Ferretti boutiques are planned to open in the Middle East, in Manama, Bahrain; Doha, Riyadh and Kuwait City, in addition to the reopening of the London Sloane Street flagship in the fall. Fifteen Moschino banners will open in China (Chongqing, Hangzhou, Chengdu,Nanjing, Shenyang, Xian), as well as units in Macau; Doha; Riyadh; in Al Khobar and Jeddah, Saudi Arabia; in the former Soviet Union cities of Samara and Tyumen; in Armenia’s Yerevan; in Azerbaijan’s Baku; in the Crocus City Mall in Moscow, and in Lima, Peru.

Pollini, designed by Nicholas Kirkwood, will open a flagship in Milan in tony shopping street Via Spiga during fashion week. Ferretti said 2011 “closed well,” with revenues rising 12.2 percent to 246 million euros, or $341.9 million, and a “brilliant” start in 2012, with double-digit growth.