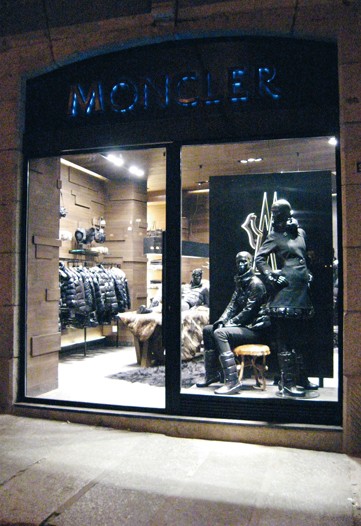 MILAN — IPOs seem to be the latest Italian fashion.

Moncler SpA on Tuesday filed documents to list on the Italian Stock Exchange, heading for a float by June. The hot outerwear brand’s initial public offering will come shortly before the equally anticipated one from Prada Group, which is expected to list its shares on the Hong Kong Stock Exchange by late June.

Moncler’s filing did not disclose the amount of shares it plans to list, although sources have said it was looking at floating up to 50 percent of the company. They estimated the float would value the group at about 1.1 billion euros, or $1.5 billion at current exchange.

Banca IMI, BofA Merrill Lynch and Morgan Stanley International will act as global coordinators. Banca IMI will also be in charge of the IPO and act as sponsor.

Moncler has turned to Latham & Watkins LLP for consultancy, while the global coordinators will work with Linklaters. KPMG SpA has been tapped as auditors.

While Prada has chosen Hong Kong for its IPO, Marco De Benedetti, managing director of Carlyle, told WWD in February that Moncler is a “European company. I think it will maintain its roots, and list where these roots and values are.” According to sources, Prada last week filed documents with the Hong Kong exchange with the goal of listing a 20 percent stake.

The timing for Moncler to go public appears fortuitous, given the brand also on Tuesday reported a 47.9 percent increase in net profits in 2010 to 52.2 million euros, or $68.9 million at average exchange rates.

Lifted by the group’s strategy to develop its retail network and to expand in international markets, in particular Asia, the U.S. and Europe, Moncler saw revenues rise 14.8 percent to 428.7 million euros, or $565.8 million, in the fiscal year ended Dec. 31.

Remo Ruffini, the firm’s president and creative director, acquired Moncler in 2003 and evolved the brand from a collection of utilitarian, down-filled apparel with mostly local distribution into a fashionable, international label. He helped build the brand’s image via projects with designers such as Nicolas Ghesquière and Junya Watanabe, and hired Bruce Weber to shoot the ad campaigns.

Ruffini told WWD earlier this year that he had focused on “returning to the brand’s roots, adding a contemporary and technological edge.” Also, international growth has always been a priority through “a directly and tightly controlled and exclusive distribution.”

In order to create a cohesive statement, Ruffini stripped Moncler down to its essence: the down jacket. “I didn’t want to overburden the consumer with too many features. It had to be a clear and simple message,” he recalled. In addition, the entrepreneur was quick to understand that financial muscle would help further sustain the expansion and so sold a 48 percent stake in the company to Carlyle in 2008.

Ruffini and De Benedetti view the IPO as a chance for the company to invest in further international expansion, both via wholesale and, increasingly, its own retail stores. Moncler currently has 46 stores and Carlyle has accelerated expansion of the retail operation over the past two years. The latter today accounts for 30 percent of sales. Last fall, stores opened in Seoul; Lugano, Switzerland, and Munich, followed by units in Shanghai and Chicago in November and Beijing in December. Another store in Beijing will open this year. Over the next three years, the company plans to open 10 stores in China.

The company’s high-fashion collaborations include Moncler Gamme Rouge for women, designed by Giambattista Valli, and Moncler Gamme Bleu for men by Thom Browne. In February 2010, the company introduced the technical ski range Moncler Grenoble, named after the French town where the company was founded in 1952.

Carlyle III, which is the pan-European fund that made the investment in Moncler, sits on a cash pile of 5.5 billion euros, or $7.2 billion.