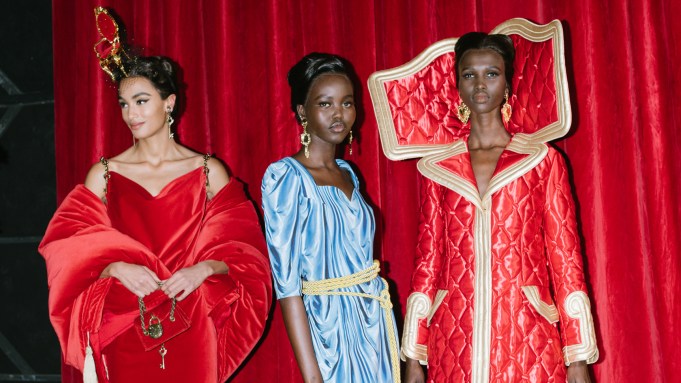 MILAN — A strong acceleration of the retail channel and a 39.5 percent jump in sales generated in the U.S. propelled the double-digit growth of Aeffe SpA’s revenues in the first half of the year.

The group, which is listed on the STAR segment of the Milan Bourse and comprises the Alberta Ferretti, Moschino, Philosophy di Lorenzo Serafini and Pollini brands, reported sales of 176.5 million euros in the period ending June 30, up 13.2 percent increase at current exchange rates — or 13.9 percent at constant exchange rates — compared to the same period last year.

Earnings before interest, taxes, depreciation and amortization increased 4 percent to 20.9 million euros, or 12 percent of revenues, compared to 20.1 million euros in the first half of 2021.

The breakdown in terms of product categories showed sales of the group’s ready-to-wear growing 14.6 percent to 120.2 million euros versus the first half of 2021, while the footwear and leather goods division was up 17.6 percent, reaching revenues of 80.2 million euros.

“First-half results reflect the effective business model of the Aeffe Group and the appreciation for our collections, with a significant growth in sales of all our brands in the different sales channels, with a strong progression especially in retail,” said executive chairman Massimo Ferretti.

To wit, sales in the retail channel, which includes directly operated stores and online, jumped 41.3 percent to 39.5 million euros versus the first half of last year.

This performance resonated especially in Europe. The group’s main market remains Italy, accounting for 40.4 percent of the turnover and reporting sales of 71.3 million euros in the first half of the year, up 21.5 percent versus the same period in 2021. Here, the retail channel grew 60 percent compared to last year.

The rest of Europe, which makes up 33.6 percent of total company sales, reported a 15.9 percent increase to 59.3 million euros. In this area, sales of the retail channel soared 104.1 percent compared to the same period last year.

Still, the retail channel accounts only for 22.4 percent of the group’s overall sales.

Hence, wholesale remains key, representing 73.5 percent of the turnover. It particularly propelled the performance in America, where sales jumped 39.5 percent to 14.3 million euros compared to last year. Yet the region has the lowest incidence on group’s total sales, accounting for 8.1 percent of revenues.

Overall, the wholesale channel reported a 7.1 percent increase to 129.7 million euros, despite the reorganization of distribution in China.

“We are therefore satisfied of the group’s performances, as well as for the evolution of the new strategic direction of Moschino and the completion of the project related to the direct management of the distribution on the Chinese market, with the related benefits expected already in the coming months,” Ferretti said.

As reported, last year the company took full control of Moschino, paying 66.6 million euros for the 30 percent stake in the brand it didn’t own. It also acquired the license to produce and distribute the Love Moschino collections of women’s apparel in house for 3.6 million euros.

Last year, Aeffe SpA also took control of Moschino’s distribution in mainland China, signaling the increasing relevance of that market for the label. This involved around 20 stores, which have been operated for the past 10 years by Scienward Fashion and Luxury (Shanghai) Co. Ltd.

The benefits of this operation are expected to further propel retail revenues starting from the third quarter of this year. In particular, the group opened 18 direct retail doors in China and previously said they expect to have 30 directly operated stores and 22 franchised units in China in five years.

“We continue to carefully monitor the challenging market context, focusing our efforts on a path of constant and sustainable growth, both in the ready-to-wear and accessories segments, together with an expansion of our geographical presence in high-potential markets, including Greater China and United States,” Ferretti said.

Investments made in the first quarter of 2022 amounted to 4.3 million euros, mainly related to works on third party assets and the purchase of software.

On Thursday, the board of directors also confirmed the appointment of Matteo Scarpellini as the group’s new chief financial officer, announced earlier this month.