The U.S. market can't get enough of online luxury, Europe is bouncing back, and Mytheresa is increasing its guidance for fiscal 2021.

LONDON — Lockdown has been a boon for Mytheresa, and now that restrictions are lifting, the near term is looking even richer as pandemic-weary consumers prepare to splurge.

The Munich-based retailer on Tuesday raised its full-year guidance on the back of surging sales and profits in the fiscal third quarter, and while Mytheresa knows that growth will slow as physical stores reopen, the company remains bullish about its near-, and medium-term, prospects.

Mytheresa said for the 12 months ending June 30, it’s expecting sales to rise 33 to 35 percent, and range from 600 million euros to 605 million euros as customers regain confidence and spend on occasion wear, bridal gowns and holiday wardrobes.

Adjusted earnings before interest, taxes, depreciation and amortization will sit between 55 million euros and 59 million euros.

The shares closed up 2.8 percent at $29.41 on the New York Stock Exchange on Tuesday.

Michael Kliger, Mytheresa’s chief executive officer, said there is “significant pent-up demand and positive consumer sentiment driving” sales in the fourth quarter, and that continental Europe has bounced back. 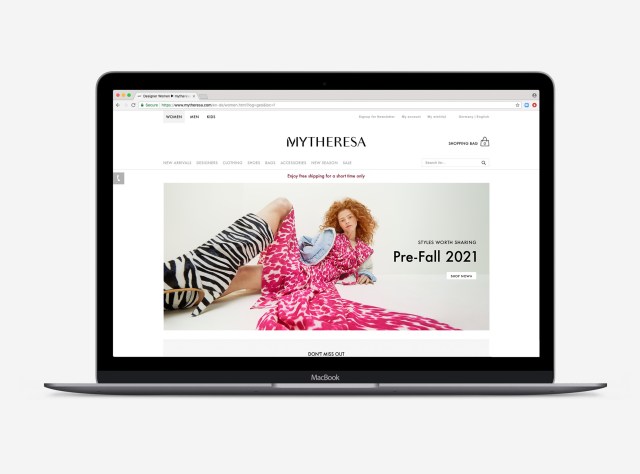 “Europe was the most psychologically affected by the COVID-19 crisis due to the large death toll in Italy and Spain, but now it is finally picking up, with people preparing for a post-pandemic world. Occasion and vacation wear has been selling, the U.S. cruise ships are booked, and there’s a backlog of weddings. There is positive sentiment once again.”

Kliger said continental Europe was the last of Mytheresa’s major markets to perk up. The U.K. has been “super strong” despite the impact of the virus, and the complications of trading through Brexit earlier this year, while the U.S. has a natural advantage.

“America has optimism in its DNA,” said Kliger.

There’s no doubt about that: In the third quarter Mytheresa saw sales bounce 76 percent in the U.S., a market it has only just begun to penetrate.

On June 1, Heather Kaminetsky will take up her role as president North America, overseeing customer-facing activities in the region, including personal shopping, communication and affiliate marketing. 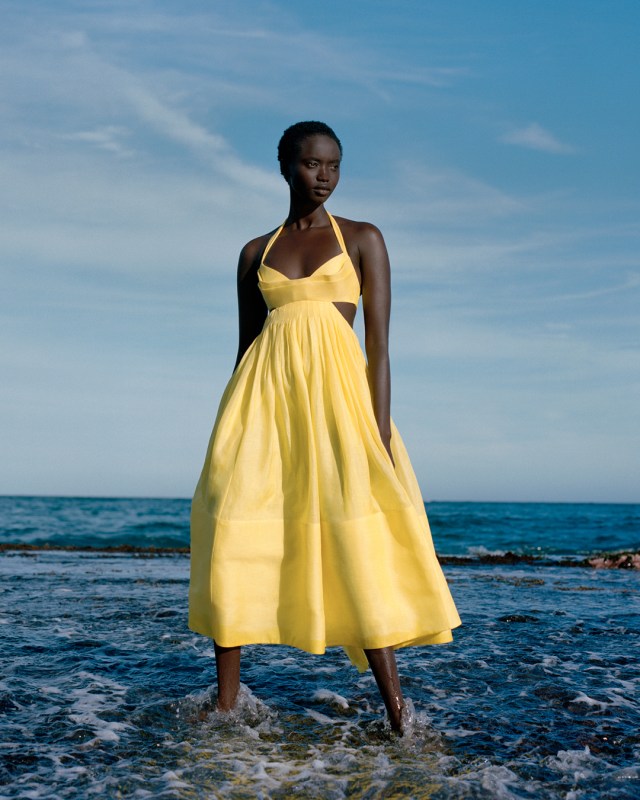 Shoppers are spending on holiday wear at Mytheresa.

Mytheresa said going forward, it has an “aggressive expansion strategy” to increase brand awareness and market share in the U.S. and in Canada.

Kliger described the U.S. market as “dynamic” and said the 76 percent-plus increase in sales in the U.S. was due to “a dramatic shift” to online shopping during the pandemic.

Sales growth accelerated compared with the fiscal second quarter, which had seen an increase of 32.9 percent.

Compared with the third quarter of 2019, well before the COVID-19 pandemic swept the world, sales were up 66 percent. 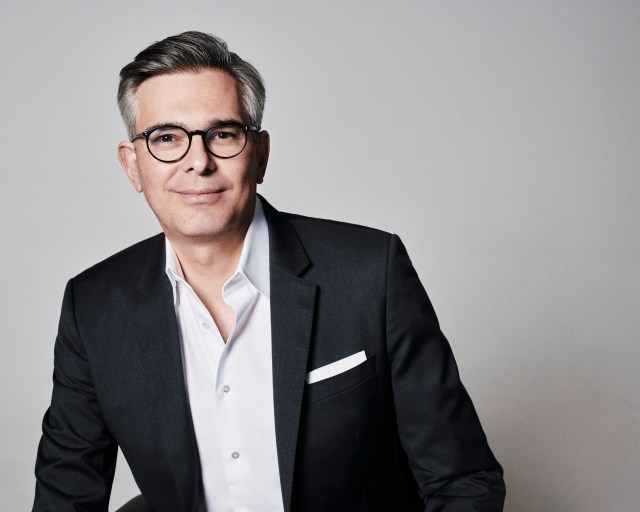 Mytheresa said it saw a rush of confidence — and of new customers — in the three months to March 31.

In the third quarter the company smashed a record it had set in the previous three months, attracting in excess of 100,000 new customers who had a “higher average spend” than ever.

It wasn’t only the newcomers who were spending.

Kliger also pointed to a “strongly increased spend from our top customers, as they begin to resume pre-pandemic activities such as social events and vacations.”

About 3 percent of all of Mytheresa’s customers generate 30 percent of the business, and the retailer works hard to please them.

Those big spenders each splashed out 10 percent more on purchases in the third quarter when many physical stores were still closed.

The “super momentum” in sales will continue into the final quarter of the year, said Kliger, hence the uptick in guidance. While he is confident about the growing demand for online luxury, he’s also aware that the market will cool as the months pass. 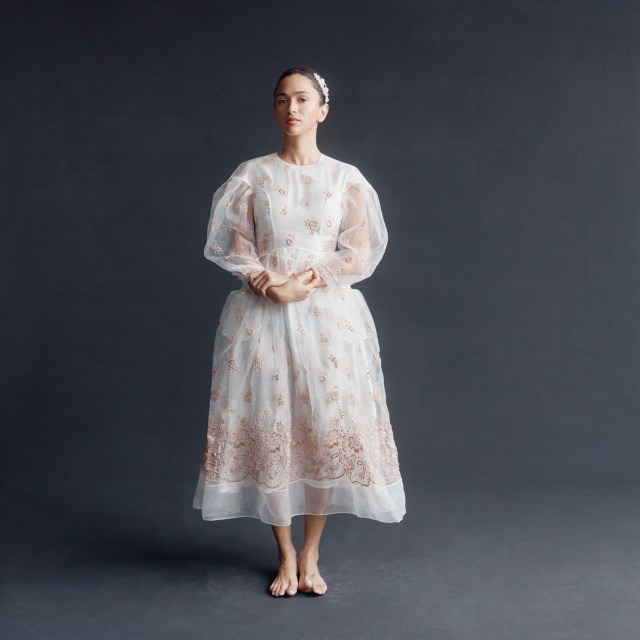 Kliger told analysts during a call on Tuesday that as stores reopen and customers divide their time between the physical and virtual worlds of shopping, he’s expecting growth to moderate. He’s confident, however, that Mytheresa can deliver 22 to 25 percent sales growth in the medium term, with “strong” profitability.

His argument dovetails with research by Bernstein and McKinsey & Co. Both organizations have pointed to an extraordinary acceleration in online sales due to the pandemic, followed by more modest growth.

In a report “Euro Apparel Retail: The Future of E-commerce vs. Stores Over the Next Decade,” Bernstein said even prior to COVID-19, the shift toward online apparel retail was well underway, moving faster than most other sectors.

“Online penetration was staggeringly high during the lockdowns, driven partly by a temporary shift of laggards to adopt online (which we think will reverse), but also a more sticky shift of existing online shoppers to increase their mix of spend online versus offline.” Bernstein said in the report published earlier this month.

Post-COVID-19, Bernstein believes that online penetration will reach 27 percent across Europe by 2022, “having achieved essentially five years’ worth of growth within a single year.” The U.K. and Germany will be the leaders “likely approaching 35 percent online penetration by that time.”

Bernstein believes that online penetration specifically in apparel retail will not be able to breach “the 50 percent ceiling” in the foreseeable future, despite the surge of online sales post-COVID-19.

It noted that pre-COVID-19, only one sector had ever crossed 50 percent online penetration: books and media, which has traded online for around 20 years and can also be consumed as a digital product.

In November, McKinsey said in a report that online shopping will remain wildly popular among consumers, regardless of how, and when, physical stores reopen.

While Kliger may be an online shopping enthusiast, he and his team continue to run the Mytheresa men’s and women’s stores in Munich, and to think like brick-and-mortar retailers.

He told analysts that Mytheresa cannot wait for a return to physical events later this year, arguing that customers crave “intimacy, proximity and services” from retailers in the form of personal shopping, trunk shows and dedicated events.

He also stressed that Mytheresa’s “pipeline of events was filling up,” and said the teams are planning for a return to physical fashion shows in September in the major cities.

Mytheresa is clearly proud of its partnership with the Centre Pompidou on a show called “Women in Abstraction” that will run from May 19 to Aug. 23, and later tour the globe. Kliger said the plan is to host top customers at live events tied to the exhibition.

As reported, the show promises a “new take on the history of abstraction,” from its origins to the 1980s, and will bring together the contributions of more than 100 female artists including Anni Albers, Vanessa Bell, Louise Bourgeois, Sonia Delaunay-Terk, Barbara Hepworth, Yayoi Kusama, Georgia O’Keefe and Arpita Singh.

Following its run at the Pompidou, the exhibition will be presented at the Guggenheim Museum in Bilbao, Spain, while another version will open in April 2022 at the Centre Pompidou x West Bund Museum in Shanghai.