LONDON — Mytheresa touted its glossy offer, tight brand relationships and ambitious strategy in the online space as it delivered a strong set of quarterly results, its first as a publicly listed company on the New York Stock Exchange.

The Munich-based, luxury e-tailer said growth in the three months to Dec. 31 came from a 28.2 percent uptick in active customers to 569,000, and “a record high” of first-time buyers — more than 100,000 — as e-commerce sales raced ahead during the worldwide coronavirus lockdowns.

Michael Kliger, chief executive officer of Mytheresa, said that setting aside the boost from the pandemic, which saw luxury customers shop from screens and mobile phones, the “strong results” are testament to the site’s unshakable strategy and business model.

“Mytheresa is about inspiration, not aggregation. It is about an unrivaled, highly curated offering, a focus on high-end luxury customers, sophisticated technologies and a first-class in-house managed service experience,” Kliger said.

He added that Mytheresa would continue to go after “the best customer base in the market,” build strong brand relationships, and “deliver growth as well as profitability.”

During a call with analysts, Kliger said Mytheresa’s fundamental strategy and growth projections did not hinge on the pandemic-fueled surge in online shopping, or on the recovery of any one region, such as Asia, where sales are running at pre-pandemic levels.

“All of our decisions are based on attracting the right customer with the right offer,” he said, adding he wasn’t interested in speculating about future sales trends such as “revenge spending” or a “new modesty.”

Come what may, Mytheresa will not veer from its “clear and consistent strategy. We’re staying on course, staying true to full-price sales and focusing on customer value. That is our secret sauce — and there is so much opportunity for us.”

Mytheresa said during the presentation that online personal luxury sales are set to range from 105 billion euros to 115 billion euros by 2025, more than triple the figure in 2019. Mytheresa wants to serve the highest echelon of those luxury consumers.

In an interview last September, Kliger told WWD that about 3 percent of all of Mytheresa’s customers generate 30 percent of the business, and the retailer works hard to please them.

“We focus on customers who build wardrobes, who buy several times a season,” he said, adding that while there are definitely men and women who save up to buy “iconic, investment” pieces, from Mytheresa, “this is not the customer base we focus on.”

The second quarter is a traditionally strong one for Mytheresa, as it encompasses sales during the key holiday season. And what a season it was: On Dec. 28, more than 11,000 shipments left Mytheresa’s Munich warehouse, while men’s wear — which launched in early 2020 — accounted for 10 percent of net sales in the month, according to the company.

With lockdown set to lift later this year, Mytheresa is preparing for sales growth to settle down. During the analyst call on Thursday, the company noted that some of the tailwinds from COVID-19 “may be expected to slow down in the third quarter, and especially in the fourth quarter, as stores reopen,” although the outlook for the fiscal year, which ends June 30, 2021, remains positive.

Kliger added that with Asia flourishing and lockdowns easing, “social and red carpet events are back on the calendar, and that’s a big driver of sales.” 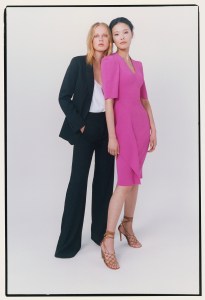 They said it was one of the “key aspects” of the model and were adamant that Mytheresa remain a full-price business, delivering profitable growth.

Kliger also talked about plans to promote the brand, and drive sales, in the coming months.

Mytheresa will be doing more “offline” marketing events in the second half and unveiling capsules and special edits. The company will also be “working on business models that will allow us to curate product and create marketing angles and stories,” Kliger said.

Indeed, Mytheresa is known for its regular delivery of luxury brand exclusives and collaborations, which land on the site at least once a month.

Already this year, Mytheresa secured two exclusive styles from Bottega Veneta’s new Wardrobe 01 collection: an exclusive suede version of the signature Chain Cassette bag, in a neutral “porridge” color, and the latest iteration of the Stretch square-toe sandal in a neutral-hued python print.

Earlier this month the brand teamed with the young Parisian label Marine Serre on a 28-piece collection that includes separates created from upcycled bedsheets and deadstock leather, as well as a series of jersey leggings, tops and catsuits in Serre’s signature moon print.

Even during the darkest days of lockdown, Mytheresa was pumping out all sorts of capsules.

There was a his-and-hers Balmain collection, a Brunello Cucinelli capsule for the whole family (Mytheresa has a robust children’s wear business) and a “Moncler Generation” collection, unveiled last September. The capsule included women’s, men’s and children’s wear — as well as outerwear for dogs.

“Point of difference is always important and that is what our clients are looking for: Something new and exclusive,” said Tiffany Hsu, the company’s fashion buying director.

Kliger added the site was in talks to push that strategy further and open shops-in-shop for brands on the site. Responding to an analyst’s question about whether Mytheresa is considering opening concessions, Kliger said talks with the brands were ongoing.

“We’re in discussions with major brands about how the model can evolve and allow us to offer more products. And we’re keen on further developing our relationships with our brand partners,” Kliger said.

The second quarter results landed a few weeks after Mytheresa completed an initial public offering on the New York Stock Exchange last month, raising net proceeds of about $344.2 million, which allowed it to clear its debts to investors. The company said it is debt-free and has more than 60 million euros of cash in hand.

On Thursday, Kliger called the IPO a “milestone” for Mytheresa, “but we’re only at the beginning of the journey. We’re in Act Two of the play, and the customer continues to be in the starring role.”