In addition, NMG will acquire the Theresa flagship store, located in the heart of Munich, from the Botschen family. 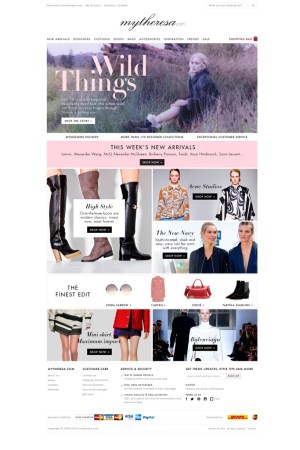 In a rare acquisition move and a bold expansion into global retailing, the Neiman Marcus Group has agreed to purchase the Munich-based Mytheresa.com online luxury business from founders Christoph and Susanne Botschen and Acton Capital Partners, WWD has learned.

This story first appeared in the September 15, 2014 issue of WWD. Subscribe Today.

In addition, NMG will acquire the Theresa flagship store, located in the heart of Munich, from the Botschen family.

Neiman’s declined to disclose the purchase price, though it’s expected to be revealed Wednesday, when the retailer reports its fiscal year-end results.

“We are beyond excited about this,” Karen Katz, the president and chief executive officer of the Neiman Marcus Group, told WWD.

“This acquisition is an important component of our long-range strategy to more broadly serve affluent customers around the world. Mytheresa has a very nice foothold in Europe and a developing foothold in Asia. We’ll probably close the deal at the end of October.”

The acquisition is the second big growth maneuver unveiled by Neiman’s in two weeks, following the disclosure that the company will open, in 2018, its first Manhattan store, being developed on the West Side in Hudson Yards.

The Mytheresa.com deal happened fast, in just about four months, and was signed last Friday. In agreeing to acquire the company, NMG will now go head-to-head with similar global online retailers, such as Net-a-Porter, Matchesfashion.com and The Corner, the full-price designer online business of Yoox Group.

“We’ve spent a lot of time with their team over the last few months, since we took our first trip to Munich in May,” Katz said. “Although we buy almost the same vendors, they edit with a different eye — for younger customers, for more international customers — than ours. It’s going to be a very nice fit within the Neiman Marcus Group.”

Asked if Neiman’s had examined other potential acquisitions, Katz said, “We have always kept our eyes open for e-commerce opportunities. There are opportunities out there, but, because of the customer they serve, the product and how they edit, and the focus on customer service, Mytheresa seemed like it would be perfect.”

Katz also cited the Mytheresa staff. “The Botschens have put together a very talented team. We were pretty overwhelmed. This was the first company where we felt really strongly that we had to learn more.”

Neiman’s plans to operate Mytheresa.com as a separate business unit, just as it operates Bergdorf Goodman, Katz said. The Mytheresa team will report to Joshua Schulman, the president of Bergdorf Goodman, who adds the title of president of NMG International. The Mytheresa team will remain in Munich, Katz added. It’s conceivable that Neiman’s will continue to examine other potential acquisitions, particularly with the formation of NMG International.

The Mytheresa management team, including managing directors Dr. Thomas Mueller and Jens Riewenherm and buying director Justin O’Shea, will continue in their current roles. An advisory board will be established with Christoph and Susanne Botschen, who are married, and representatives from NMG.

“It’s going to be a complete, independent, separate business unit reporting into me,” Schulman said. “We really value the team on the ground at Mytheresa.

“As we get into working together, we will find opportunities to learn from each other, but we are buying it on the basis of it being a stand-alone business unit,” he noted.

Schulman said NMG was attracted to Mytheresa because it’s an international, Europe-based business that has “a different point of view” than the NMG Web sites, though NMG, he added, does ship to 120 countries. While now overseeing Bergdorf’s and Mytheresa, Schulman said there are no plans to add to the portfolio.

Mytheresa.com was launched in 2006 as a way to expand the 13,000-square-foot Theresa store, which opened in 1987. With $130 million in annual sales, the Web site and store sell about 170 high-end designer labels, among them Balenciaga, Yves Saint Laurent, Dolce & Gabbana, Miu Miu, Bottega Veneta, Isabel Marant, Chloé and Valentino. The women’s-only business, focused on ready-to-wear, accessories, shoes and handbags, is known for a carefully edited selection and a global audience that is concentrated in Europe, the Middle East and Asia. The site offers styling and fashion advice, free returns and exchanges, and express shipping. Around 500 new products go online every week, and more than two-thirds of the company’s revenue is generated outside Germany. The company employs more than 200 people.

Though anything but acquisition-prone, NMG has taken significant stakes in a couple of high-profile firms in the past two decades. The luxury retailer acquired a 56 percent stake in Kate Spade in 1999 for $33.6 million and expressed big plans for the brand, including store openings. However, in 2006, NMG sold Kate Spade for $124 million to the then-Liz Claiborne Co. Inc., which proceeded to more aggressively reinvigorate the brand and eventually sold off all its operations to become what’s now called Kate Spade Inc.

NMG also once owned Gurwitch Products, the licensee of Laura Mercier. Gurwitch was founded in 1995 by Janet Gurwitch, who was a former executive vice president at Neiman Marcus. In 1998, Neiman’s bought a 51 percent stake in Gurwitch, but sold the company in 2006 to Alticor Inc. for an undisclosed amount.

It’s long been a subject of debate as to whether the Dallas-based Neiman’s has potential outside the U.S. While overseas stores have been mulled in the past, the Mytheresa deal is the first that really gives NMG some legs to grow internationally. Earlier this year, the company pulled out of its investment in Glamour Sales Holdings, the Asian-based e-commerce site specializing in flash sales. NMG continues to operate a Web site for the China market. While Neiman’s ships to many countries, China is the only one for which the company has a dedicated site — with Mandarin translation, size conversion charts and customized creative.

NMG decided not to hold inventory in Chinese warehouses; instead, it plans to ship to Chinese customers from the U.S. Glamour Sales had been handling the fulfillment from China.

Neiman’s is under some pressure to increase volume and profits and reduce debt due to the deal last year by Ares Management and the Canada Pension Plan Investment Board to buy the $4.65 billion NMG from TPG Capital and Warburg Pincus for $6 billion. Neiman’s, however, remains an industry leader in productivity, service and fashion authority. The group was tracking at $567 in sales per square foot for its second quarter, and, lately, the luxury customer has continued to spend.

Some say Neiman’s, with 43 stores in the U.S., including Bergdorf’s, has most affluent markets already covered and therefore limited prospects for expansion. But, two weeks ago, Neiman’s confirmed that it plans to open its first store in Hudson Yards, a move that comes amid massive retail and luxury development around the city. Neiman Marcus will occupy 250,000 square feet over three levels and anchor the 1 million-square-foot Shops at Hudson Yards, on Tenth Avenue. Neiman’s will be on the fifth, sixth and seventh floors of the complex, posing the challenge of drawing up shoppers. Sources said that, by the third or fourth year in business, the location could hit $200 million in annual sales, becoming one of the best Neiman’s locations. In New York, Neiman’s is also planning to open a store in Roosevelt Field Mall in Garden City, Long Island.

With Mytheresa, Katz said NMG’s initial focus will be on sustaining its rapid growth, though she declined to say how fast the brand has been growing. “They will have everything they need to continue the rapid growth,” she said.

Asked about the possibility of opening a second, third or more Theresa stores and possibly tapping Mytheresa vendors that Neiman’s may not sell or vice versa, Katz replied, “Actually, we have not got that far in the strategy….What we are really intrigued by is, there is going to be an opportunity to share best practices. They do an amazing job in their warehouse and have an interesting way that they get product from the [fashion] shoot onto the Web. From a Web-marketing perspective, we can help them. At Neiman Marcus Group, e-commerce is core to our business. It represents 24 percent [of total revenues],” Katz said.

Katz said Neiman’s began pursuing Mytheresa after being notified by the banking community that it was up for sale. Morgan Stanley acted as the financial adviser to NMG.

“We are a very profitable business,” Susanne Botschen told WWD. “We’ve been profitable from minute one. Our store, it’s almost 27 years old. It’s always been internationally driven, with a very sophisticated assortment of brands. The selection of brands you can also find somewhere else, but the selection within the brands is quite feminine, supermodern and with a certain cool touch. All this, together with the expertise in e-commerce and German efficiency, makes for success.”

The Botschens named the business Theresa because they felt it had a classic ring and, as well, a universality — it’s a name used by the upper and lower classes, nobles and peasants alike.

At one time, they considered additional stores, but then e-commerce started to explode. Acton Capital helped scale the business, and, a year ago, a 12,000-square-meter warehouse outside of Munich was opened. It has the capacity to handle much more volume than the business currently does, Botschen said. In the past few years, the Botschens have been localizing the site so it appears in different languages in some countries, such as Italy, France and the Middle East, with localized assortments, as well.

“I really have to say we are very happy and very proud Theresa is going to such good and professional hands. We are very happy it will be continued in our spirit and that they understand it and will keep it an independent business. Our children are grown. They are heading into completely different directions. We never pushed them, and my husband and I are not getting younger. This is the main reason” for selling the business, Botschen explained. “When you build something from scratch and later decide to let go, it’s a big change in life. We wanted to secure the future and our success and wanted to care for our people. It’s important this is going into good hands.”