Neiman Marcus Powers Ahead With 187% Spike in Earnings

Inventory and expense management led to the Neiman Marcus Group’s 187 percent leap in earnings in the quarter ended July 31. 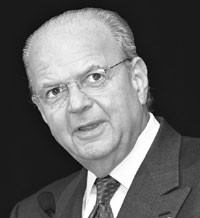 In the quarter ended July 31, the Dallas-based luxury retailer earned $20.6 million, or 42 cents a share, representing a 187 percent jump from $7.2 million, or 15 cents, in the year-earlier period. Results included a $3.9 million pretax charge for the impairment of the company’s Chef’s Catalogue tradename. Neiman’s own estimate was for earnings of 30 to 35 cents.

Excluding the charge, Neiman earned $22.9 million, or 47 cents, in the just-completed quarter, which beat analysts’ estimates of 36 cents in earnings per share.

In the fiscal year, revenues were $3.55 billion, an increase of 14.4 percent over the prior year’s sales of $3.1 billion. Comparable-store sales increased 14 percent.

“We had an outstanding quarter and year in ever aspect of the Neiman Marcus Group,” Burt Tansky, president and chief executive officer of Neiman Marcus Group, said during a conference call. He said the key to the success is “our steadfast commitment to highest standards of customer service and merchandising”

But Tansky expressed some caution about the months ahead, adding, “Beginning this year, sales growth will be more challenging.” He predicted a 7 to 9 percent comp gain in the first quarter, against 10.7 percent gain in the first quarter of the previous year. Still, the first-quarter guidance was an increase from a prior estimate for positive 5 to 7 percent first-quarter comps.

Discussing specifics of last year’s performance, Tansky said, “We maximized our full-price selling this year. Our merchant organization maintained a very disciplined buying strategy and we carefully analyzed our promotional events to minimize our markdowns.”

He also said the company reached many milestones this year, including a record $530 in sales per square foot, and expense ratios of 24.7 percent, the best in six years. Internet sales grew over 50 percent last fiscal year, and the Web remains a highly leverageable business model.

The specialty retail division had strong demand across all classifications, but Tansky specifically cited contemporary sportswear, premium denim, short skirts, ponchos, color, handbags, casual footwear, tweed, brooches, designer jewelry, fur “worn in almost every imaginable way” and the return of the suit. Men’s wear has experienced a resurgence. “Color will continue into fall, and I feel certain designers will continue with colors for next spring.”

Inventory of specialty retail was up only 4 percent last fiscal year compared with sales growth of over 11 percent.

Without citing locations, Tansky said that through a new “focus” program, three stores were pumped up with extra advertising, sales associates, mannequins, fixturing and capital. He said Neiman’s was “underpenetrated” as far as attracting its target customers in those three markets and that the focus strategy involved increasing marketing to attract new customers, capital improvements to enhance the store environment and better matching up of associates to customers.

“We gave them a complete overview of what we thought were their needs to maximize opportunities in the markets. We did three stores [last fiscal year] and will add three for the fall, and for spring, there will be another group,” but probably not all 36.

Bergdorf Goodman, he said, continues to renovate its store, with the fifth floor contemporary area up next.

No Neiman’s openings are slated for this year, but there will be openings for fall 2005 in Boca Raton, Fla., and San Antonio, and in fall 2006, in Charlotte, N.C., and Natick, Mass. Tansky said he sees 2 to 3 percent annual square footage growth over time.

“The financial strength of the company provides us with the flexibility to pursue initiatives and strategies that will further enhance our position with the affluent customer and increase the value to our shareholders,” Tansky said in a statement.