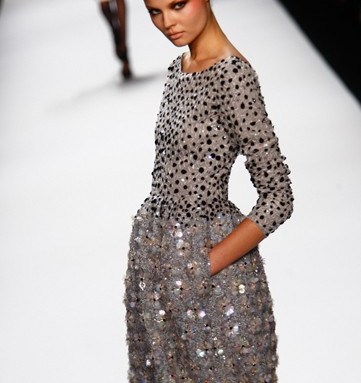 The Bill Blass ready-to-wear line designed by Peter Som could be in danger of closing.

The existing Bill Blass operation is worth more without the unprofitable high-end designer business, known as Bill Blass Couture, because of losses that would have to be assumed by a new owner if the rtw unit were retained. Sources peg the losses sustained by that business at more than $1 million a year.

A sale of the Bill Blass brand without Couture by its owner, NexCen Brands Inc., essentially would be of the brand name and its licensing operation. That would allow a new owner to reap the benefits of future licensing opportunities, without incurring the debt and overhead sustained by the operation of an actual design house and its required design and manufacturing network.

If a sale of the Blass brand gets completed without Couture, the rtw unit likely will be shut down by NexCen, industry sources said. Moreover, said one industry insider, the Blass brand without the rtw collection would allow for the brand to be taken down-market, where it would have a shot at a new customer base in either the mass or discount distribution channel.

Reacting to the reports, Craig Hoffman, president of NexCen’s Bill Blass unit, told WWD, “Bill Blass Couture is an essential component of the Bill Blass brand and NexCen is supporting Couture so that it operates at the highest level of quality. Couture is opening market this week with its spring collection and we are looking forward to the continuation of the exciting design direction Peter Som began last fall. NexCen’s sale process is still under way and until a sale is completed, it will operate the business for the greatest value of the brand.”

Asked if NexCen would continue to operate the business if a buyer balked at the rtw unit, Hoffman said, “I don’t think we know the answer to that. We’d have to evaluate that with a new buyer when that materializes.”

Following reports that Som, the designer who has his own collection and serves as women’s wear creative director for Bill Blass, would leave Blass, NexCen said in late July that he hadn’t resigned and would present a spring 2009 Blass collection for retailers only, in lieu of a runway show. Som presented his own collection on Monday. Neither the designer nor NexCen has clarified whether or not he will continue in his current capacity for Blass.

Word of the possible separation between Blass and Couture wasn’t entirely a surprise. NexCen made what many considered a curious decision in July, tightening its grip on the Blass business it already was trying to sell with the acquisition of the Couture unit, which is responsible for the rtw collections presented under the late designer’s name.

Supposedly the purchase was to make it much easier to effect a sale of the entire Blass brand since all operations now would be under the same umbrella. “As we continue to explore strategic alternatives, including the sale of our Bill Blass brand, we believe that owning Bill Blass Couture will maximize the potential sale value of the overall business,” Robert D’Loren, then chief executive officer of NexCen, said in July.

However, the rtw business has had a very distinct downside. In a filing with the Securities and Exchange Commission, NexCen said the unit operated at a loss and the brand management firm expected it would have to pump between $1.7 million and $1.9 million to keep it in operation.

NexCen acquired the business from Michael Groveman and Carly Andrews Inc. for $425,000 in net liabilities. It agreed to forgive the acquired firm’s obligation to repay about $950,000 lent during the first quarter of this year to support marketing expenses, and released Groveman from a three-year non-compete provision dating to NexCen’s acquisition of the Blass brand in February 2007.

Groveman, who, along with Tharanco Group chairman Haresh Tharani, sold the Blass business to NexCen for $54.6 million in cash and stock in February 2007, bought the Couture business for undisclosed terms just before NexCen’s Blass acquisition. It then operated through a royalty-free license from NexCen.

Sources also said activity on a possible sale of Blass could heat up by midmonth. It was anticipated last month that activity would heat up on the sale after NexCen’s financial adviser began sending out one-page information sheets about existing Blass licenses earlier in the month.

The adviser requested that initial bids for the Blass brand be submitted by mid-September.

Previously, Arnold Simon’s Designer Licensing Holdings, which has the Blass jeanswear license and owns 10 percent of the Blass trademark, had made a preliminary offer of $24 million for the brand. Angelo, Gordon & Co., the private equity group that has owned the Bill Blass New York direct sales operation since 2006, has offered $26 million for the brand, bankers said.

It couldn’t be immediately determined if both are planning on resubmitting bids for Blass this week, or if there are other so-called dark horses that could make a play for the Blass brand.

An announcement on Blass this month could involve the naming of a stalking horse bidder. That step will allow NexCen to have a second bite at the proverbial apple because it paves the way for others to step up and submit higher offers once a baseline price has been set.

Sources expect the initial stalking horse bid to come in at between $26 million and $27 million, or slightly less than half of its purchase price.

Meanwhile, even with a new bank agreement in place, NexCen is under additional pressure as the sale of its Waverly home brand is on hold.

Sources said negotiations between NexCen and the partnership of Windsong Brands and Hilco Consumer Capital, expected to produce a sale of Waverly for $30 million to $32 million, have broken down. Windsong and Hilco have had an exclusivity agreement for Waverly since July. While it couldn’t be learned why the discussions fell apart, financial sources said the liquidity crunch may have made it more difficult for the partners to obtain financing for a Waverly purchase.