Avon Products Inc. may have its problems, but its competitor is making the direct-selling model fire on all cylinders. 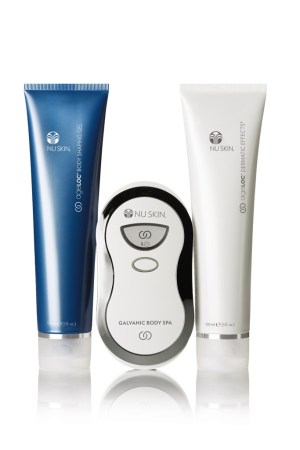 Its much larger peer, Avon Products Inc., has stumbled recently, but Nu Skin Enterprises Inc. has quietly figured out how to make the direct-selling model fire on all cylinders: Offer its global sales force premium-priced products to sell.

Nu Skin’s flagship skin care range, AgeLoc, sells for between $50 to $450 for a monthly regimen, and the brand has underpinned much of the company’s growth since its inception three years ago. Deutsche Bank analyst Bill Schmitz called AgeLoc a “game-changer,” and with good reason.

Since 2009, the company has grown at a compound annual growth rate of 10 percent, and in the most recent year period, at a rate of 15 percent, said Truman Hunt, Nu Skin president and chief executive officer, who has served at the helm since 2003.

“When the business was founded in 1984, Nu Skin decided not to compete on the lower-end, mass side of the business. Instead, we compete on product benefits,” said Hunt, adding that product development begins with a benefit in mind and is not hindered by a particular price ceiling.

“Our business model is high octane,” said Hunt. “A wildly successful Avon representative may make $40,000 to $50,000 a year. In our model, a successful Nu Skin distributor [or rep] may make $40,000 to $50,000 a month.” He described Nu Skin’s representatives, who the firm refers to as distributors, as educated and motivated individuals. It’s a group that also includes professionals, like doctors. Nu Skin’s business is split, nearly equally, between personal care products, like AgeLoc, and nutritional supplements — all with an antiaging bent. Hunt estimates that 90 percent of its distributors sell across both categories.

“We have the benefit of a highly enthusiastic distributor calling on someone, one on one,” said Hunt. “We’re essentially a mobilized department store, but unlike department store brands that rely on advertising, we are not limited to 30-second sound bites.”

AgeLoc, which relies on technology designed to target and then influence age-related genes, has added more “octane,” in Hunt speak, to Nu Skin’s product pipeline.

“AgeLoc has been the big growth driver,” said Stifel Nicolaus analyst Mark Astrachan. “Assuming Nu Skin gets the new product launches right — which it has in recent years with AgeLoc — it will continue to generate a significant amount of growth.”

“As a multilevel business, Nu Skin really affords representatives to earn a living,” said Astrachan. He noted that Nu Skin funnels 43 percent of its sales back to its distributors through incentive programs.

In the wake of turmoil at Avon — which is knee-deep in operational issues and an ongoing ceo search — a number of Wall Street analysts have criticized Avon’s single-level selling model, which they say is further hampered by low price points, making it “too hard too make a living,” as one source said.

Consumer Edge Research analyst Javier Escalante explained the issues of Avon’s single-level model in a recent research note, saying, “Selling 99-cent deodorants requires too many transactions for the reps to earn a couple hundred dollars a month, or qualify as a ‘leader’ and be compensated on sales from her recruits.”

These same analysts point to Nu Skin’s model as an example of how to kick the direct-selling challenge into high gear and attract a strong sales force. AgeLoc seems to have done just that on a global scale.

Since its introduction in 2009, AgeLoc has generated $1 billion in sales, said Hunt. Its two latest products, R-squared and Galvanic Body Spa, reaped $100 million in orders when introduced as part of a limited-time offer in October, said Hunt. “We expect to double that for the next launch in fall 2013,” he added. AgeLoc also is well ensconced in Asia, where the company’s year-over-year growth rate is 17 percent.

In the year ahead, Hunt said Nu Skin has its sights set on Latin America — where it currently has a small presence in Mexico, Colombia, Argentina and Venezuela — and on India. “These markets will likely require a modified model than we currently do,” he said, adding Nu Skin’s approach will likely fall somewhere between where Avon plays and where Nu Skin is positioned.

Earlier this month, Astrachan wrote in a research note, “We anticipate at least mid- to high-single-digit sales growth over the next three to five years driven by developing markets and a solid innovation for the AgeLoc trademark.”