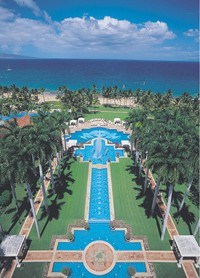 If you’re thinking of taking a few days off this summer, why not splurge on a little for a trip for the entire family? The American Automobile Association recently released its annual vacation costs survey, which ranks states by how expensive they are on a daily basis for a family of four, based on average costs of food and lodging. Of course, if you’re looking to save a few bucks this summer you can always hit some of America’s cheapest destinations: North Dakota ($191), Nebraska ($191), Kansas ($193) and Iowa ($196). The overall cost of vacationing increased by 5.4 percent from last year, said Michael Petrone, director of AAA tourism information development. “Rate increases for lodgings are mostly a result of supply and demand, especially in major markets.”

1. HAWAII
Average daily cost for food and lodging: $559
Between the active volcanoes, lush forests full of waterfalls and gorgeous beaches, exploring this group of islands in the Pacific could take any family weeks. For luxury accommodations, take advantage of either the Fairmont Kea Lani or the Grand Wailea Resort (pictured left), found in Maui. The sprawling 780-room resort, built in 1991 on 40 oceanfront acres, boasts the largest spa in Hawaii — the 50,000-square-foot Spa Grande. And the Fairmont Kea Lani, which resembles a Mediterranean castle, is the only resort in Hawaii that has nothing but suites and villas. One-bedroom suites start at $385 a night, while posh villas start at $1,600 a night.

2. WASHINGTON, D.C.
Average cost: $518
The country’s capital is a vacationing family’s dream: Seeing the region’s historical sites such as the Washington Monument and Lincoln and Jefferson Memorials, along with the White House and the National Air and Space Museum will keep children occupied, while adults can enjoy amenities at upscale lodgings such as the Four Seasons Hotel (left), located on Pennsylvania Avenue in Georgetown. Rates run from $375 to $565 per night, depending on the night of the week and holiday rates. The hotel also offers a Premier Family Package, which is designed for a family getaway. The Web site states, “To accommodate a family of four in comfort, the package includes a second luxurious room and full American breakfast for four daily.”

3. NEVADA
Average cost: $348
Summertime in Vegas is hot — in every sense of the word. With temps soaring well above 100 degrees, tourists can find plenty of cool spots along the Strip, home to some of the world’s largest hotel casinos, including Caesars Palace, The Venetian (left) and the pyramid-style Luxor Hotel — a family-friendly destination where kids can enjoy pool activities, an IMAX Theater and a two-story video arcade. The Wynn Las Vegas, which opened last year, offers designer stores such as Louis Vuitton, Oscar de la Renta, Jean Paul Gaultier, Dior and Chanel.

4. NEW YORK *
Average cost: $329
The state of New York has more to offer than just the bustling streets of Manhattan. Vacationers heading out of the city to the north will find paradise in towns like Saratoga and Ithaca and in regions such as the Hudson Valley and in Lake George and Lake Placid in the Adirondacks. The Mohonk Mountain House (left), located in the Hudson Valley, offers summer activities including guided hikes led daily by staff; tennis courts; fishing, boating and swimming in Lake Mohonk; croquet; platform tennis; a putting green; shuffleboard games; greenhouse tours, and fitness classes. Rates run from $258 to $775 per night, and there is no charge for children under age four.

5. RHODE ISLAND *
Average cost: $329
The smallest state in the nation is also one of the priciest during the summer months. But it can be worth it, as Rhode Island’s scenic views are filled with mountains, forests, lakes and ocean beaches. Newport’s Castle Hill Inn and Resort (left) is an exclusive oceanfront Victorian-era mansion situated across 40 acres of land. The Inn offers gourmet dining with spectacular views and live music, along with winery and Newport mansion tours. Deluxe room and suite prices range from $229 to $1,059, depending on when you visit, but keep in mind the resort considers its grounds appropriate for children only over the age of 12.

6. CALIFORNIA
Average cost: $320
Fun destinations for the whole family across the state include Disneyland in Anaheim, the San Diego Zoo, the Wild Animal Park (also in San Diego) and Six Flags Hurricane Harbor in Valencia. Adults may want to take advantage of some time in Napa Valley. For luxurious accommodations, stay at the Villagio Resort (left) in Yountville, which offers poolside breakfast, golf, biking, tennis, specialty shops, hot-air balloon tours and, of course, wine-tasting adventures. Suites can accommodate children with no trouble: They include a connecting room with two queen beds and sleep up to six people.

7. NEW JERSEY
Average cost: $311
New Jersey has a little of everything to offer, including direct access to New York City, miles of coastline and beaches and plenty of historic landmarks. In Cape May, Congress Hall Inn (left) is a site to behold in this historic region at New Jersey’s southern tip. The hotel (rates run from $100 to $450 midweek, and $125 to $450 for weekend nights) is located in the heart of the Victorian district and directly across the street from one of the Cape’s nicest beaches, along with a wealth of local shops just a few minutes away. Also in the vicinity, kids can enjoy historic Cold Spring Village, an Early American open-air living history museum.

8. MASSACHUSETTS
Average cost: $310
New England is an ideal place to be in the hot summer months. Inland, the temperatures are typically a bit cooler, while the Atlantic coast provides plenty of breeze and sunshine for beachgoers. Popular destinations in Massachusetts include Cape Cod, Nantucket and Martha’s Vineyard. Considered casual, but upscale, one of the Vineyard’s larger inns is the Winnetu Inn (left), located in Edgartown, on the southern coast of the island. In March, Child Magazine ranked Winnetu the “#1 Family Resort in the Northeast.” For a break from the kids, moms can head into town and shop at local specialty stores such as Chica and Dream Weaver Collection — both of which offer women’s clothing.

9. FLORIDA
Average cost: $303
True, the Sunshine State attracts families from all over, thanks to theme parks like Disney World in Orlando, Busch Gardens in Tampa and The Rapids Water Park in West Palm Beach. But Florida is also a golfer’s paradise. Located in southern Florida is The Ritz-Carlton Golf Resort, Naples (left), a Mediterranean-style resort on the Gulf of Mexico. The luxurious destination provides guests with plenty of amenities, including three miles of beach, six tennis courts and a fully equipped health club and spa. On-site golf is available at Tiburón Golf Course, where two Greg Norman-designed courses are available for avid golfers. The resort was rated as the number-one luxury golf resort in Florida in Golf Digest magazine’s November 2004 issue.

10. DELAWARE
Average cost: $294
Perhaps one of the biggest attractions to the state of Delaware is its plethora of beaches and boardwalks along the coast. Places such as Dewey Beach and Bethany Beach draw in the masses each summer season. In addition to Delaware’s own population, many Pennsylvania residents also swarm the beaches. In Rehoboth Beach, families looking to spend a few extra dollars can stay at the Bellmoor Spa and Resort (left). Amenities include: libraries, game rooms, country breakfasts, a full service day spa, a sun terrace, pools and gardens.

Source: American Automobile Association; *Indicates a tie; for this survey, AAA considered the district of columbia to be its own state or region