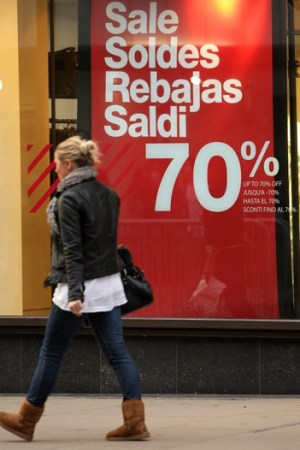 Major banks may be healthier than originally feared and hopes may be rising that the economy has bottomed out, but there is still one word that continues to strike terror in the hearts of business executives and government officials alike: deflation.

Even as Federal Reserve Board chairman Ben Bernanke last week proclaimed “some improvement in consumer sentiment,” the specter of the American economy experiencing a prolonged downward spiral in prices — as is already happening in countries from Spain to Japan — is a major concern. And it’s likely to remain one until consumers find their footing and government stimulus funds siphon through to pocketbooks.

The reverberations will likely be felt in every facet of the industry, not just in apparel prices but in areas ranging from rents and mall occupancy rates to the costs of advertising and manufacturing options.

“Deflation is probably going to last until everybody feels comfortable about buying stuff,” said Fariborz Ghadar, director of the Center for Global Business Studies at Pennsylvania State University.

“I believe this fall could be worse than last fall, but I think that next spring is going to be better than this spring,” said Ghadar of consumer spending. “The consumer is still very scared.” Even if sales are down in the fall, retail profits should fare better than last year because inventories will be more in sync with lower demand.

While excess capacity in idle factories presents an opportunity to cut costs further, the stakes are high for the apparel industry, which has pulled back the pricing clock with steep promotions and is training shoppers to expect bargains.

“If they don’t hold price, then you’ve got some real issues,” said Deborah Weinswig, a Citigroup analyst who tracks department stores and discounters. “You’ve got a whole can of worms.”

Last month, Weinswig took a more bullish outlook on shares of J.C. Penney Co. Inc., Kohl’s Corp. and Target Corp. based on the notion that their private label programs will benefit from a lower cost of goods. She said production costs for apparel, footwear and home goods would fall by 2 to 3 percent in the second quarter, 5 to 7 percent in the second half and 2 to 3 percent next year.

Weinswig expects half the cost savings to go to the retailer’s profit margins, while the other half goes toward higher-quality merchandise. Even if retailers did hold prices, this would be deflationary since the consumer would be getting more for the same price.

Deflation is nothing new to fashion, which has seen prices fall because of mass corporatization, trade liberalization, the rise of China and cut-throat competition for the consumer’s dollar. The “Wal-Mart factor,” the lower price base established by the world’s largest retailer, has made an irrefutable contribution as well.

Last year, the industry seemed on the cusp of an inflationary spurt with rising labor costs in China and higher energy and raw material prices. But weakening U.S. demand and the credit crisis led to an abrupt halt in consumer spending, oversupply and retrenchment. On the input side, both wool and cotton prices are down more than 35 percent over the past 12 months.

Overall, women’s consumer apparel prices fell a seasonally adjusted 3.5 percent last year as stores promoted heavily to move inventory. Prices rebounded some in January and February only to fall again in March. Men’s apparel has been steadier, with prices dipping 1.3 percent last year and increasing in the first quarter.

March price tags for women’s apparel prices marked a 19 percent drop from their August 1993 peak, as men’s prices fell 10.4 percent from their August 1998 peak, according to figures covering a 25-year span. Fashion might be a bargain, but consumers are still holding on to their dollars.

And so are retailers, as they fight to right the balance between supply and demand that got so out of whack last fall when business dropped off dramatically. Retailers are still recovering from the accompanying indigestion, which led to deeper and more widespread holiday markdowns than ever.

At apparel and accessories specialty stores in February, the most recent month for which figures are available, inventories outweighed sales by a ratio of 2.5-to-1, roughly on par with a year ago, according to seasonally adjusted figures from the Commerce Department. Inventories rose compared with sales in late 2008, reaching a ratio of 2.72-to-1 in December. Department stores have cut inventories more dramatically relative to sales and were at 2.05-to-1 in February, down from 2.17-to-1 a year earlier.

That should help keep prices from falling off as dramatically as they have in recent years, he said.

Fashion’s price drop is now part of a broader economic picture in which the recession is forcing consumers to cut back and creating deflation concerns from Spain to Germany to Japan. The U.S. government is so antsy to head off deflation that the Federal Reserve has effectively dropped its benchmark interest rate to zero and pumped billions of dollars into the economy, risking inflation down the line. So far, the consumer has felt only a touch of that stimulus.

Economists and businesses are largely flying blind given the extraordinary nature of a recession that defies easy comparison but is usually described as the worst since the Great Depression.

“At the end of the day, economics is trying to describe the psychology of the market…the buyer as she goes into the store,” Penn State’s Ghadar said. “The traditional economic indicators are becoming less and less reliable.”

That leaves retailers with their gut instincts, which often tell them to focus on survival and slash prices. But all chains are not in the same boat — and, in the long run, observers say, that might not be the best way to survive deflation.

“If you’re a retailer who is caught in the valley of sameness, then price is the trigger that you’re going to have to use,” said Matt Katz, managing director at Alix Partners LLC. Retailers that offer value in other ways — from unique brands to better service — will have an easier time maintaining prices.

Retail is a particularly visible business and the pricing response to the recession is on display for all to see, a transparency that lends itself to lower prices because consumers can pick and chose more easily.

Abercrombie & Fitch Co.’s Fifth Avenue New York store on a recent morning had a line of shoppers stretching around the corner waiting for the doors to open. Once inside they were nearly overwhelmed by the scent of cologne and entranced by the mood lighting and bare-chested male model. There was not an inkling of a sale or price cuts and shoppers seemed mostly to be soaking up the experience than rushing to the cash register.

This steely dedication to image comes at a corporate cost, seen in the brand’s 17 percent drop in comparable-store sales last month on top of a 32 percent decline in March.

Not far away, Banana Republic was selling all of its accessories for 50 percent off and advertising women’s bags for $98. Banana Republic’s North American same-store sales fell 8 percent in April and 16 percent in March.

Leon Nicholas, director of Retail Insights at MVI Retail Insights, noted that the Banana Republic promotional signs with large numbers and small words emphasized pricing over product. Other retailers are also hammering away on price. A few blocks away, H&M, the fast-fashion value retailer already known for rock-bottom prices, advertised blouses that were buy one, get one free. The Men’s Wearhouse has adopted a buy-one-get-one-free model while Jos. A. Bank has been running buy-one-get-two-free suit promotions.

There is only so much these promotions can do.

“Now people are simply not in the stores,” said Nicholas. “You can add all the signage you want. If nobody’s in the stores, then sales don’t go up. People have traded out of whole [retail] experiences.”

The apathetic consumer and the pressure on prices, even if they don’t spiral down dramatically, mean competition will become even sharper and retailers will have to up their game.

“Don’t just go for low costs, but go for high interest,” he said, adding brands have to be presented in such a way shoppers can understand what they signify.

In the long run, Moriarty believes the Federal Reserve and central banks in other countries would pump enough money into the global economy to stave off a broader deflation, but that people would still be trading down.

“There’s still going to be strong supply from overseas that is going to continue to feed deflation in apparel, but a lot of it is going to depend on what happens to the dollar going forward,” Retail Forward’s Badillo said. “The dollar is currently strong and that should suggest downward pressure.”

A year from now the picture might change as government stimulus spending begins to reach consumer, he said.

And that might raise a different fear: Many economists wonder if all the government spending used to prime the pump of spending will result in an inflationary spiral.