P&G's beauty division is bidding adieu to one of its key leaders, Marc S. Pritchard, as he takes on a new and bigger role within the company. 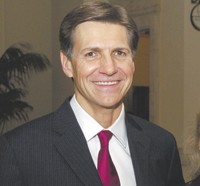 NEW YORK — Procter & Gamble’s beauty division is bidding adieu to one of its most respected leaders, Marc S. Pritchard, as he takes on a new and bigger role within the company.

While he will not be dealing with beauty day-to-day anymore — an industry he’s served for the past 20 years at P&G — Pritchard said he’ll still be close to it, since “beauty is a growth engine” for the company, and since he will continue his position as chairman of the Cosmetic, Toiletry and Fragrance Association, a role he assumed a year ago. Pritchard began his career at P&G 24 years ago in what is now the family and baby care division. He first touched beauty when P&G acquired the Richardson Vicks business in the Eighties.

P&G is combining its professional and retail hair care businesses, to be overseen by one person, Chris Delapuente, in a new position. Delapuente will continue to report to Susan Arnold, vice chairman, P&G, Beauty & Health. Carsten Fischer, president, Global Professional Care, will now report to Delapuente.