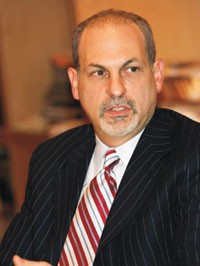 NEW YORK — Regardless of the size of an apparel or luxury goods manufacturer, companies need to protect their brands and intellectual property. And as the market for counterfeit goods grows on a global scale, this need becomes critical.

For some companies, the work is daunting, and for many smaller firms, it can be exhausting. But there are strategies that can be employed to protect a company, according to a recent panel discussion.

The panelists discussed the problems and possible solutions to combating what has become an estimated $550 billion global counterfeit market.

WWD: How much do apparel and fashion companies spend annually on anticounterfeiting?

Muller: Spending between $10 million and $50 million for a company to fight copies and counterfeit products is a tremendous amount. In the fashion industry, the firms are pretty conservative. They prefer to spend money in coalitions. I would say about $10 million is a lot of money.

Jacoby: I know the International Anticounterfeiting Coalition tried to do a survey a couple of years ago with Fortune 500 companies. I think they found a spotty response. People are not keen to share this information. I’m sure part of it too is that everybody doesn’t divide the pie in the same way. If I’m putting hologram labels on my goods, I may treat that as a manufacturing cost rather than an anticounterfeiting cost. They [IACC] came up with between $2 million and $4 million per company per year. In comparison, the pharmaceutical industry, which has it’s own counterfeiting problems, they’re spending now between half a million and $3 million a year according to a study. You can spend as much as you want.

Brokate: However, with companies that are start-ups or new in the fashion industry and are experiencing a counterfeiting problem for the first time, they will come to you and say, “We have X amount of dollars that we can allocate from our budget, how do you recommend we spend it?” That requires an analysis of what their problem is. Is it a flea market problem? Is it a street sale problem? Is it an import problem? Is it a problem on the Internet? Is it all of the above? You generally spend what you can and try to build an effective anticounterfeiting program from there.

Gursky: To make a program successful, you need to get a company to agree that any recoveries should be reinvested as a top-of-the-line item. What some companies will do is, if you have a recovery in a case arising out of a counterfeiting situation, they’ll take it and put it in the general funds of the company. The better idea for a company starting a program is to agree that any recoveries will be added to the line item that they’ve created. If you reinvest the benefits derived from those actions, then you can get together a critical mass of money in a way that’s much less painful to the company, again, because it’s a newly created line item. We’ve done that with a number of companies We’ve had cases against Wal-Mart and other major discounters where the programs have actually ended up costing the client nothing over the course of a year or years. That’s obviously an ideal situation.

WWD: At what point must a manufacturer confront a counterfeiting problem?

Jacoby: In an ideal world you’d want a client in this business to come talk to you the day before they go into business so you can say, “Let’s take a look at that contract with your manufacturer. What have you done to give yourself adequate inspection rights? Let’s take a look at what you’re doing with distribution.” It’s much better not to have the first phone call be, “Hey, guess what? We’re famous enough to be knocked off.”

Scungio: All of us have had experiences where a client comes to you and you can see holes in their portfolio. The easiest thing to do is to look at the holes and make estimated annual costs to see what a client can do to build a nice wall so when the problem becomes significant, you can move quickly.

WWD: Do smaller manufacturers understand the need for legal protection on a global scale?

Muller: The normal reaction of the client is “Why do I have to be protected on a worldwide basis if I’m not selling or manufacturing there yet?” One of my cases years ago involved Patrick Ewing. I persuaded his agent to make sure Patrick’s rights were protected on a worldwide basis. They asked why they needed this in places like China and other countries. Later, we raided two factories and were able to confiscate 48,000 pairs of Ewing shoes, simply because the trademarks were registered, not because he was doing business there. That is something very difficult to understand at the start-up level.

Scungio: It’s a lot like real estate. If you take care of it, it will grow for you. We’re not encouraging people to get extra insurance. There’s actually a great deal of value we’re creating by identifying what are the most important parts of your array of styles, your trademarks, your brand image and how can we do the best to leverage that value for you and keep the bad guys off the grass.

Brokate: If a company is forced to act, it’s too late. They already have a problem which, perhaps, is uncontrollable. They’re going to have to spend lots of money and resources just bringing the problem under control.

Everybody has had clients that you couldn’t convince to file all around the world. There are people in other countries who read WWD, and that’s where they’ll find the next hot brand. They’ll spend the money on a trademark application in Venezuela or Colombia or Guatemala. The next thing you know, you’re fighting to cancel a trademark.

Scungio: It does take a notable amount of time and money to address that issue so when a client says Asia is important, we’ll broaden our perspective. We are often in the position of locating five or six bad guys. They’re not producing goods, but they’re sitting on the rights and they have leverage in terms of negotiating price to recover those rights.

WWD: How can manufacturers avert dumping all their funds into legal fees?

Jacoby: Part of what you’re trying to convey to them is that they can punch above their financial weight by being clever in how they approach things. Pirates are entrepreneurial types, and if you can make the cost of ripping off your client’s mark higher than someone else’s [mark] you’ll be better off.

Muller: Creating coalitions with other companies is also important. The more active the companies get, the more coalitions they form, especially in pursuing actions against other parties. It will be cost-efficient for some parties that don’t want to spend a tremendous amount of money.

Gursky: The apparel companies led the march in joint actions. They were more willing to do it, at least the domestic apparel companies. However, it’s not always a formal coalition. One time it can happen with four companies and the next time it will be five different firms. It has happened a lot more over the years.

Brokate: Some very good real-life examples of these joint cases would be the landlord cases, those brought against the landlords of the building. While there might be separate lawsuits filed by the companies against those landlords, it is a joint effort from a watch company and a handbag company. One thing we have learned over the years is that it is probably better for each plaintiff to have their own lawsuit and their own seizure order. Multiplaintiff actions can become hard to manage.

Muller: In other countries the most effective way to pursue actions is not to bring civil lawsuits because you can stay in court forever. It’s better to really get the police and local prosecutors involved. Bring a raid action with police. Normally they are expeditious and the raids are doable because this is where a group of companies could get together. It’s more efficient.

Gursky: Whether you’re dealing with law enforcement in the U.S. or around the world, they will often value the amount of effort they will expend on your behalf by the size of problem. The federal government here will have a higher threshold for their interest in cases than local law enforcement. Perhaps you can get more clout behind you if you can group together people who each have $100,000 problem rather than just yours. It’s critical not only to the efficiency, but also just getting law enforcement officials involved. They also like to know that they don’t have to listen to five different attorneys.