The Italian company operating in the prototyping and production of fashion collections for a range of luxury brands makes its debut in the Aim Italia program.

Founded in 2000 by Fulvio Botto and Franco Martorella, Pattern is a leading company operating in the designing, prototyping, development and production of fashion collections for a range of luxury brands. Since 2014, the Turin-based firm also owns the Esemplare sportswear label, while in 2017 it signed a deal for the purchase of the Roschini Atelier Srl company, also operating in the design and production of women’s wear lines.

On Wednesday, Pattern’s cofounders Botto and Martorella and chief executive officer Luca Sburlati rang the bell of the market opening ceremony at Palazzo Mezzanotte, which houses the Italian Stock Exchange.

“Seeing this small reality growing up and landing on the Italian Bourse after almost 20 years is a source of pride for us and for the Made in Italy,” said Botto. 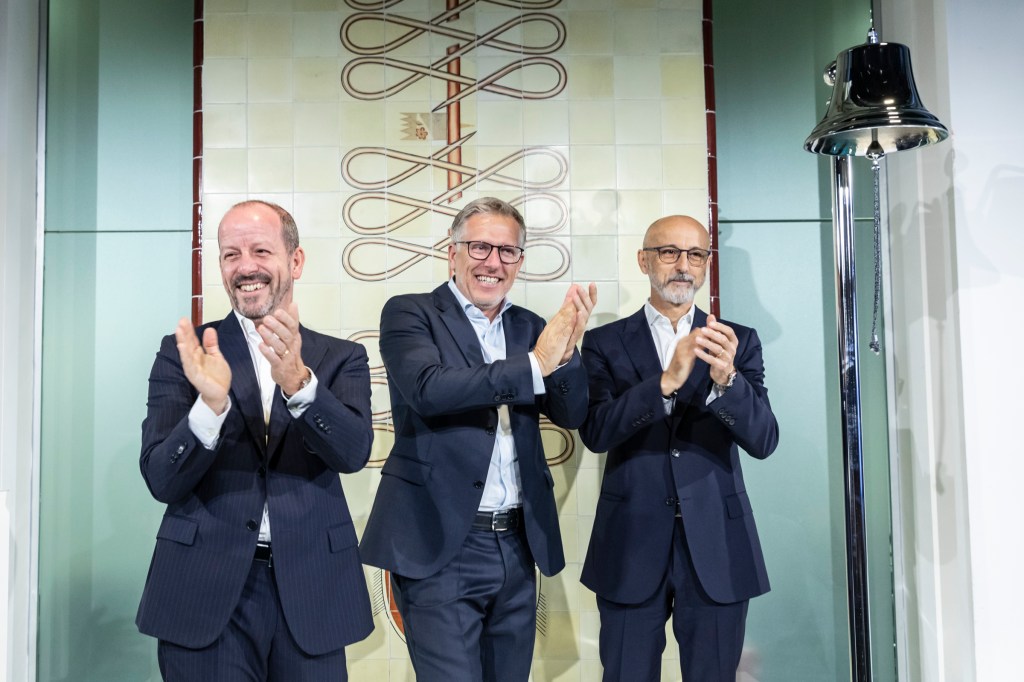 Pattern’s admission to the program saw the listing of more than 3.3 million shares, of which more than 2.6 million were shares coming from a capital increase and the remaining were sold by Pattern’s stakeholder Ma.Bo. The company’s initial public offering collected 12.5 million euros.

Pattern floated 24.86 percent of the firm. The price per share was initially set at 3.25 euros for a total capitalization expected to reach 44.25 million euros at the beginning of the negotiations.

On Wednesday, Pattern’s price per share was 3.57 euros when the market opened and reached a peak of 3.79 euros an hour after the opening.

The company will use the resources of the listing to further develop its business, aiming to create an Italian pole leading the prototyping of collections for luxury brands, according to Sburlati.

“This is the beginning of a new journey for us,” said Sburlati. “Italianness, sustainability and technology are the guiding lines that have always inspired us and that during these past years enabled the company to grow in the luxury market, which is increasingly fast, innovative and attentive to these assets. […] We hope our way to see the future could inspire the other numerous, extraordinary Italian small and medium-sized companies. Today the only way we can compete on international markets is by growing together and grouping together our skills,” concluded the ceo.

Pattern is the 17th company to be listed this year in the Aim Italia program, which includes 121 companies.

In the last six years, the company triplicated its revenues, which total more than 40 million euros.