Penney’s Party: Quite an ‘Experience’ 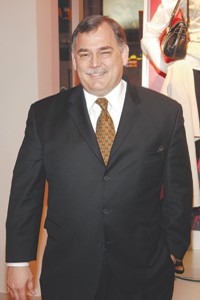 The temporary, 15,000-square-foot space features a lot of kiosks — and no sales racks. Penney’s packed in 500 people for a party to benefit Broadway Cares/Equity Fights AIDS and unveil the chain’s TV ads, latest private label looks and point-of-sale technology.

The TV campaign features a series of high-energy spots with rock music and the “It’s all inside” tag line. The new POS system, installed in 500 stores last year with another 500 slated to be outfitted this year, was shown by store managers who noted it has touch-screen commands enabling associates to provide faster service and checkout. The POS swivels around so customers can use it.

Myron Ullman 3rd, chairman and chief executive officer, said Penney’s is the nation’s largest online general merchandiser, exceeding $1 billion in sales, which he attributed to extensive consumer research and providing what consumers want. This year, with the new advertising and a battery of special events, Penney’s is unleashing its biggest brand campaign, Ullman said.

He noted that Penney’s struggled through the Nineties and then executed the most dramatic retail turnaround in 20 years. “From one of the most visible and visited spots in the world, J.C. Penney will highlight all that is new at our company,” Ullman said.