Christian Lacroix is embarking on a new growth phase - and looking for a strategic partner. 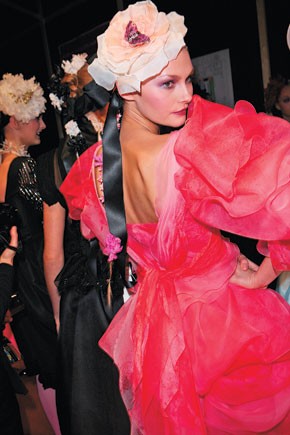 PARIS — Christian Lacroix is embarking on a new growth phase — and looking for a strategic partner.

This story first appeared in the February 12, 2008 issue of WWD. Subscribe Today.

WWD has learned that Lacroix, owned by Florida-based Falic Group, has engaged London-based Savigny Partners LLP to explore the possibility of a minority investor to accelerate the fashion company’s expansion.

“I want to make sure we know what our options are, and if there’s an interesting proposal out there, we might consider it. If not, we’ll just continue,” said Nicolas Topiol, Lacroix’s chief executive officer.

Topiol said he could not rule out an outright sale of the company, but stressed the goal is to seek “intelligent money” to help Lacroix realize its sales and profitability targets. It is understood Lacroix has already made overtures to several potential investors.

Topiol declined to identify them, but suggested initial reaction has been positive. “It’s a name that definitely triggers interest,” he said. “And it’s now a company that has a very, very solid foundation.”

In a telephone interview, Simon Falic, chairman of Falic Group and Duty Free Americas, stressed his family’s commitment to the Lacroix business, noting the company has been “fully financed by us. We don’t have any outside lenders involved.”

Skeptics initially questioned whether the travel retail specialists might take the Lacroix brand down-market and cash in on its recognition. Instead, the Falics have continued to invest in couture, almost doubling that business, while deflecting all manner of licensing proposals in a drive to bolster Lacroix’s luxury positioning. “If we weren’t committed to the business, we would have taken the easy routes,” Falic said.

He reiterated the goal is to sell a minority stake to fund expansion, but also mentioned that an initial public offering “could be done down the road.”

Since Falic Group acquired Lacroix from LVMH Moët Hennessy Louis Vuitton three years ago, Topiol has engineered an extensive reorganization of the company, disentangling it from the world’s largest luxury conglomerate. Such diverse functions as accounting, information systems, product management, logistics, customer service and warehousing were all brought in-house, a process that was only recently completed. Topiol said spring deliveries would be the first with the firm’s new teams, including a network of factories and ateliers in France and Italy.

The company — which has estimated wholesale volume of about 40 million euros, or $58 million at current exchange — is still seeing losses, Topiol acknowledged. However, he asserted that “the business today is in a much healthier state than it was three years ago in terms of strategy and brand positioning. Our operations continue to improve.”

The executive declined to give precise figures, but said Lacroix’s sales last year slipped by about 5 percent. The decline stems primarily from a 2006 decision to phase out the Bazaar and Christian Lacroix Jeans diffusion lines and concentrate on the signature line of ready-to-wear — which was brought more upscale in line with the house’s high-fashion image.

“It’s been a work of transformation: closing a lot of accounts, opening new accounts and getting people to embrace the new concept,” he explained.

Elsewhere, the brand has shown plenty of vigor. In reporting fourth-quarter sales earlier this month, Avon credited its new Lacroix scents for about half of the 23 percent growth the beauty firm logged in its fragrance business.

Topiol cited “nice growth” and “good sell-through” with select licensed products, including men’s wear, wedding dresses and lingerie, and strong results from recent partnerships: with La Redoute for a line of fashions and home decor items, and with Evian for a baroque, limited edition bottle commanding impressive prices at sites like eBay.

In December, Lacroix opened a Manhattan flagship at 36 East 57th Street. “It’s starting really well,” Topiol said. “We had a good month in January and we’re preparing for an event there in March. It shows our commitment to the brand and the U.S. market.”

Looking ahead, Topiol spies the potential to grow Lacroix’s rtw business in markets like the U.S. and Middle East.

At present, Lacroix operates two company-owned boutiques in Paris, one clearance outlet at La Vallée outside of Paris, and a Las Vegas location, in addition to New York. There are also 23 freestanding franchise boutiques: seven in the Middle East, six in Argentina and five each in France and Japan.

Among openings scheduled for 2008 are boutiques in Bahrain and Kuwait, and the brand’s flagship on the Faubourg Saint-Honoré here is slated for an overhaul toward the end of the year.

Accessories are also considered another key expansion area, and the company is recruiting a senior product manager and designer for handbags and shoes to boost its profile in the category.

The designer, who has been emphatic about having good chemistry with his new owners, has been informed of the Falics’ plan to seek a potential partner.

“The financial success of this company is something that’s very important to him,” Topiol said.

“I have a three-year plan to take the company to a profitable stance,” he continued. “I think we have the foundation in place to grow the business. We’re finished with one chapter and now we’re opening the chapter of growth. We feel 2008 will be a very good year for us.”