What the financial crowd sees for the year ahead. 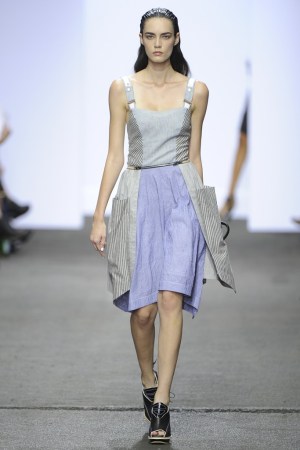 Discussions with market and financial sources on fashion and retail trends last year raised some interesting ideas on what is percolating in the marketplace. The following are a few that were mentioned that could show some strong legs in 2013, with the impact of having everyone rethinking what 2014 could bring.

OVERSEAS FIRM TO KEEP AN EYE ON: Rakuten Inc., a Japanese Internet service firm founded in 1997, provides a B2B2C marketplace platform that is shop-centric, compared with competitors that are product focused. Three years ago, the firm decided to grow beyond its domestic borders and in 2010 acquired the Aliso Viejo, Calif.-based Buy.com for $250 million through Rakuten USA. Mark Kirschner, vice chief marketing officer, said, “Because Rakuten’s e-commerce operation is a business marketplace platform, we act as a facilitator and, unique among our competitors, allow the individual businesses to customize their own storefronts on our site.” Look for Vau.lt, now in beta testing, to launch early this year, the latest U.S. direct-to-consumer site under Rakuten’s umbrella. In addition, Derek Wall, Vau.lt’s chief executive officer, said Rakuten will launch a Rakuten user ID early next year that will allow each holder to access any Rakuten-operated site anywhere in the world. Rakuten in May also led a consortium that invested $100 million in Pinterest. EBay and Amazon will still be megaplayers, but Rakuten’s B2B2C platform could be where the action is this year.

PERSON TO WATCH: Yehuda Shmidman joined Sequential Brands Group as its new chief executive officer in November. The former chief operating officer at Iconix Brand Group was involved in many mergers and acquisitions initiatives, and helped grow the small five-fashion brand firm when he joined in 2005 to a company with more than 25 brands generating more than $360 million in licensing revenues. Sequential last month acquired Heelys Inc. for $63.2 million, and Shmidman is on the prowl for more deals.

CONSUMER CREDIT AT RETAIL: Conns, a home goods and electronics retailer, offers a variety of proprietary credit options that make it easier for many subprime consumers to buy what they need. According to David Galper, managing director at KeyBanc Capital Markets who is also head of the retail and apparel investment banking group, said, “This credit expertise is a significant competitive advantage as it drives loyalty and profitability.” While some retailers such as Kmart reinstituted a related concept called the layaway plan, Conns allows working middle class consumers to actually take their purchases home while making low monthly payments on an installment plan.

BRAND MANAGEMENT WARS: In the last few years, Iconix Brand Group had the lock as leader in the brand management category. Sequential Brands Group and Authentic Brands Group are the latest entrants in the new category of acquirers with an eye on licensing. Last month, Sequential acquired the intellectual property assets of Heelys Inc., while Authentic bought the brands under the former HMX Group umbrella that includes Hart Schaffner Marx and Hickey Freeman. While all three are looking for new deals, the new entrants might have the advantage — as upstarts, they don’t need big deals to move the needle.

AMERICAN FASHION IN VOGUE: Is 2013 the year for the American designer in fashion? Financial and creative sources say yes, as the American aesthetic features wearable and versatile apparel that can go from day to night at affordable price points. Think Rag & Bone and Sophie Theallet. And while overseas aspirational consumers used to first hit the high-end European luxury brands, accessibility to information online via e-commerce sites has broadened their horizons at a far faster pace than ever before. In particular, Asian consumers who want to express their own unique identities no longer want to wear what their next-door neighbors are wearing. So it may be the American designers who win market share in 2013.