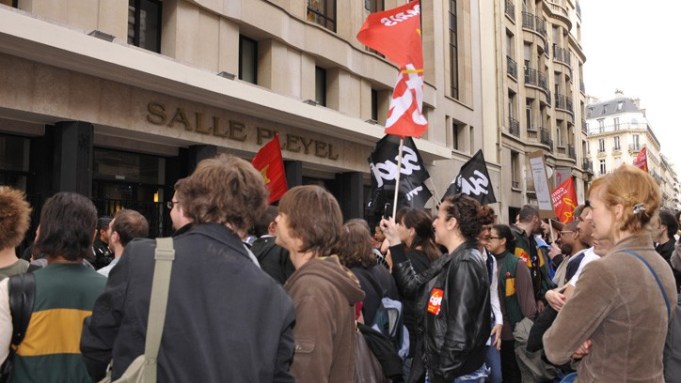 PARIS — Some PPR shareholders entering the firm’s annual meeting were pelted with eggs Thursday, as about 100 employees out front voiced anger against planned job cuts at the group’s La Redoute, Fnac and Conforama chains.

Hoisting placards, one depicting a cartoon businessman grinding workers into cash, union members urged shareholders to forfeit at least some of their dividends to preserve about 1,900 jobs.

However, shareholders were unmoved and overwhelmingly approved a dividend of 3.30 euros, or $4.39 at current exchange, a share, which was 4.3 percent less than a year ago, reflecting how the economic crisis stifled consumption and bit into profits last year.

Shareholders also welcomed Aditya Mittal, the 33-year-old son of billionaire steel titan Lakshmi Mittal and president and chief financial officer of Arcelor Mittal, to the firm’s board of directors.

He said PPR would continue to be vigilant about costs this year in the face of the economic crisis, and defended the job cuts, out of a total workforce of some 88,000, as a necessary step at the first signs of slowdown in order to avoid “more radical measures” later.

He cited the closure of five Sergio Rossi stores in the U.S., and of several Conforama furniture stores in Italy and Spain, as examples of other tactics to streamline operations.

However, questioned about the retail chain’s lower profitability, he defended PPR’s diverse holdings, saying the “alchemy” of both mass and luxury business is needed to build a strong group.

Last month, PPR said it requested France’s market authorities to investigate “unfounded rumors and diffusion of false information” relating to the possible sale of Gucci Group. At the meeting, a PPR spokeswoman reiterated it categorically denies the rumor.

PPR employees demonstrated in front of the firm’s Avenue Hoche headquarters last month, and some went on strike to protest the job cuts. And in March, protesting workers blocked Pinault in a taxi for just under an hour before he was freed by police.