Prada Shares Inch Up on First Day of Trading

Market had been bracing for a drop. 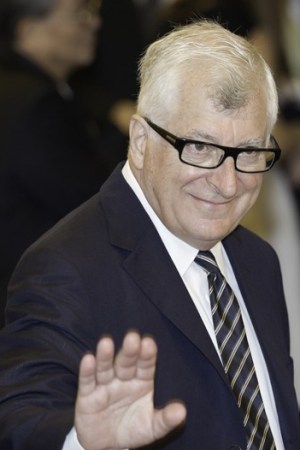 HONG KONG — Prada SpA made a surprising debut on the Hong Kong Stock Exchange Friday, with its shares closing slightly higher than the final offer price. The market had been bracing for a drop after Prada priced its initial public offering on the bottom of its guidance and raised fewer funds than expected.

“This is the first Italian and the first luxury company to list in Hong Kong. We see it as a landmark. China will be one of the most important countries for luxury worldwide and other companies will follow in our footsteps,” Prada’s chief executive officer Patrizio Bertelli said during a morning listing ceremony at the exchange. Photographers jostled for prime spots to photograph the executive.

Bertelli, who spoke in Italian through an English translator, thanked his team as well as his wife, creative director and group president Miuccia Prada, who he said couldn’t be at Friday’s listing because she was working.

Speaking from the main trading room, Bertelli said the listing in Hong Kong was the accomplishment of “many years of important work” and that the listing was challenging given the time difference between Milan and Hong Kong. “We are more familiar with the Hong Kong stock market now,” he added.

With Hong Kong’s stock market weighed down by concerns about a possible Greek default, continued weakness in the U.S. and some weak indicators in China, expectations for Prada shares have been muted.

Shares were priced at the lower end of the indicative range and retail demand for the listing was weak. Shares of Samsonite, the luggage maker, dropped 7 percent on their first day of trading. Despite the concerns, Hong Kong’s Hang Seng index closed up for the second day in a row, rising 1.9 percent on Friday.

Prada raised about $2.14 billion from the listing with a majority of shares coming from existing stock owned by Miuccia Prada and others in the company. Another major shareholder was Italian bank Intesa Sanpaolo SpA, which Friday said it sold 102.25 million shares of Prada, representing about 4 percent of the fashion firm’s capital. The bank now has 25.59 million shares.

Not everyone was happy about Prada’s showing. As reported, feminist groups were considering staging a demonstration to show their support for Rina Bovrisse, a former Prada Japan employee who is suing the house for alleged discrimination against women. There was a handful of protesters who held court outside the exchange, holding up signs that read “the devil only wears Prada” and “shame on Prada” and chanting “don’t buy Prada, stop discrimination now.” A group of protesters also formed outside one of Prada’s flagships in the city.

Inside the exchange, Prada executives and bankers sipped Champagne and nibbled on dim sum, Chinese-style barbecued pork and sushi rolls. The room, adjacent to the main trading floor, was crowded as it was shared with executives from Courage Marine, an Asian shipping company also listing on the Hong Kong exchange Friday.