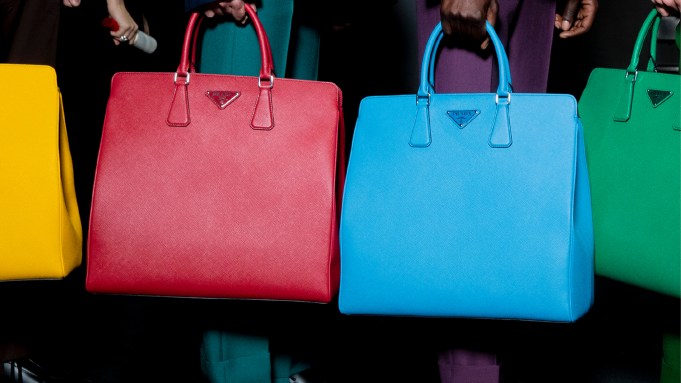 LONDON — In the wake of strong revenue and profit gains in the first six months, Prada Group is sailing into the second half of the year with optimism — about China, its fast-growing leather goods business and its long-term strategies for growth.

As reported earlier this week, Prada will restage its men’s and women’s fall 2022 collections in Beijing on Aug. 5. The show will take place at Prince Jun’s Mansion, a courtyard hotel in downtown Beijing, formerly the residence of Prince Jun in the Qing dynasty.

The Beijing outing marks the Italian luxury brand’s return to the Chinese capital after 11 years, and it seems nothing will stand in the way of its plan – not even the latest lockdown in Wuhan, which was announced just as Prada released its first half results.

“We are seeing a recovery in China,” said Patrizio Bertelli, the group’s CEO, during a call to discuss the results for the first half ended June 30.

Bertelli acknowledged the news of the Wuhan lockdown, but said he remains cautiously optimistic about the market’s recovery in the second half.

Bertelli touted Prada’s “global presence and geographical distribution of sales,” and said the group’s 600-plus store network helped to mitigate the impact of lockdowns in mainland China and the ongoing sanctions on Russia.

Bonini said the second half started on a high note thanks to “strong” trading in July driven partly by “an improvement” in China.

“We continue to monitor China and are looking at how the COVID-19 situation is developing. It remains an uncertain environment,” Bonini said.

Prada principals stressed that the Chinese market has not returned to normal, and that health controls, and consumer demand, vary by city and by region.

But the Beijing show will go on.

Until last month, some 30 percent of the group’s retail network was shut due to lockdown in large swathes of the country, so Prada is not only eager to make up for lost time, but also to reconnect with Chinese consumers.

Prada’s China push comes in the wake of strong revenues and profits in the first half of fiscal 2022.

The gains came from double-digit increases at all the group’s brands, and all the main product categories and geographic regions.

The return of American tourists to Europe was a big driver of sales, as were higher average prices, and the volume of goods sold.

Bonini noted during the analyst call that Prada Group has “a very healthy balance” between average price growth and sales volumes.

Net income nearly doubled to 188 million euros, while the group’s net cash position was 179 million euros as of June 30.

Prada Group, which returned to profitability in fiscal 2021, remains bullish about the current year, despite the macroeconomic challenges brought on by Russia’s invasion of Ukraine, and ongoing COVID-19 crises in China.

He said that Prada Group’s “position of strength gives us confidence to execute against our strategy of fully exploiting our brands’ potential.”

Analysts were full of praise for the first-half numbers.

Barclays called them “solid” as Prada outstripped market expectations by 5 percent. At constant exchange, Prada’s sales were up 22 percent compared with Barclays’ projection of 14 percent.

Prada’s EBIT margin was 13 percent above consensus, although net income fell short of analysts’ expectations, which Barclays said reflected higher financial costs and tax rate in the half.

Bernstein said Prada is “well on track to deliver and surpass” the 20 percent EBIT guidance it provided at the most recent Capital Markets Day.

Prada’s intensified focus on leather goods was a big topic on Thursday’s call. The strategy is to boost leather goods sales to 60 percent of overall revenue.

In the first half, the leather goods division generated 51 percent of revenue, followed by ready-to-wear with 27 percent, footwear with 19 percent and other products with 2 percent.

The company said demand for leather is strong across the Prada, Miu Miu and Church’s brands, and it believes that leather is the key to long-term, sustainable growth.

There are few luxury brands that consistently make their money from leather goods that cost upward of 2,000 euros, and Prada wants to be part of that club.

“We’re raising the floor on leather goods growth, with higher prices and higher quantities sold,” Bertelli said. “Sixty percent of revenue is a demanding goal, and it does mean that our other categories will eventually make up a smaller percentage of business — but they’ll still grow.”

Bertelli added that 90 percent of the group’s leather goods production is in Italy, and the plan is to produce even more on home turf. He said Prada continues to invest in local sourcing and manufacturing.

During the call, Lorenzo Bertelli, head of Corporate Social Responsibility at Prada, said the company was committed to responsible leather sourcing, and to tracking every step of its supply chain and leather procurement process by 2023.

Prada, he said, is a member of the Leather Working Group, a not-for-profit organization that wants to drive positive change within the global leather industry. Its members include 1,800 businesses from across the leather supply chain.

Inside Prada Group, leather certainly has some stiff competition with other product categories that are growing at a faster rate.

In the first six months, leather goods grew by 18 percent, compared with footwear, which surged 39 percent, and ready-to-wear, 32 percent.

Bertelli said the double-digit rise in ready-to-wear sales was a result of the Prada brand “going back to its roots.”

He has a point.

For fall, codesigners Miuccia Prada and Raf Simons put a fresh spin on the brand’s DNA for the streetwear-loving set.

It was heritage Prada rebooted for a socially savvy generation.

Sales grew in the double-digits in all regions except for Asia Pacific, where they fell 7 percent.

Prada Group does not break out its China figures, but the region remains a significant one for the brand. Prada said the decline in the region was mitigated specifically by a strong performance in South Korea and Southeast Asia.

Europe saw an uptick of 89 percent driven by domestic sales and a surge in tourism, especially from Americans.

Sales in the Americas region were up 41 percent, with triple-digit growth compared with pre-pandemic levels, while Japan rose 28 percent, and the Middle East 24 percent.

The U.S. market alone has more than doubled in size since before the pandemic, although sales have begun to slow due to all of the American tourists choosing to buy their Saffiano leather bags, or nylon totes, in Europe rather than at home.

Prada said it will continue to invest in the U.S. market, which it described as “very important” for the brand.

The group is also working on upgrading and refurbishing its store estate worldwide, which counts 627 stores across all the brands.

Between September and the end of this year some 12 new Prada and Miu Miu stores will open, with around 20 pop-ups planned.

Prada’s priority is understood to be store refurbishments aimed at optimizing sales per square foot, rather than new openings.

The group’s annual capex budget ranges from around 200 million euros to 250 million euros, and this year’s spend will likely be at the top of that range.