Primark Stung by COVID-19 Closures, and No E-commerce Strategy

Inside one of the world's largest Primark stores in Birmingham, England which opened in 2019.

LONDON — Sales at Primark took a beating in the last four months of 2020 — and the numbers could get worse due to enforced store closures amid COVID-19, and the retailer’s refusal to engage in e-commerce.

Primark’s parent, Associated British Foods, said in a trading update on Thursday that in the 16 weeks to Jan. 2, 2021 — the key pre-Christmas trading period — retail performance had been “materially impacted” in the U.K. and the European Union, with an estimated loss of 540 million pounds in the four months.

The company said as of Thursday 305 stores were closed, representing 76 percent of its overall retail selling space. ABF also noted that if the shuttered stores remain closed until the financial half-year, on Feb. 27, the sales loss would reach approximately 1.05 billion pounds.

That figure is higher than ABF’s previous estimate, of 650 million pounds, announced on Dec. 31.

In addition, under the scenario that the entire Primark store estate could be closed imminently, and remain closed until the end of March, ABF said it would expect to see, over the three-month period from January to March, a further loss of Primark sales of some 0.8 billion pounds, and a consequent reduction in profit contribution of some 0.3 billion pounds.

Asked whether the pandemic-related closures had made Primark think again about its distribution strategy, a spokesperson for ABF told WWD the retailer was committed to selling through brick-and-mortar, with no plans to open an e-commerce channel.

Despite the store closures — and the related sales declines — Primark has been pushing ahead with store openings in markets that remain open.

The company said although COVID-19 has delayed some store openings, it still expects to add a net 0.7 million square feet of additional selling space in the financial year, which ends in September.

It also plans to downsize its Boston Downtown Crossing store to 38,000 square feet in order to improve store profitability and customer experience. 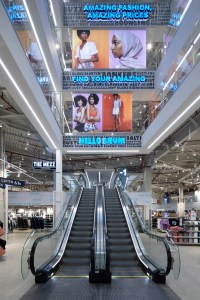 Inside the world’s largest Primark store in Birmingham, England, which opened in 2019.  Cloud 9 Photography

Looking ahead, ABF said it will continue to open Primark stores this year after signing a lease for a store on Jamaica Avenue in Queens, New York; and for nine stores across Italy, France, Poland and Czech Republic.

In a flash report following the trading update, Royal Bank of Canada said it expects ABF to drive further share gains after stores reopen, due to its “compelling” price points.

Retail prices at Primark, which is ultimately controlled by the same family that owns Selfridges and a string of high-end stores including Brown Thomas in Ireland and Holt Renfrew in Canada, are well below those of high-street fashion giants such as Zara and Hennes & Mauritz.

“Although it lacks a transactional digital offer, we think Primark’s prices act as a barrier to entry versus online competitors, and we see an opportunity for it to accelerate U.S. expansion. That being said, Primark remains impacted in the short term, whilst stores are shut, by its lack of online offset,” the bank said.

Shares in ABF were broadly flat at 22.19 pounds in mid-morning trading on Thursday. The shares were up 1.53 percent at 22.55 pounds at the close of trading.

ABF said that in the four months under review, when stores were open, trading was strong given the circumstances, with sales at minus 14 percent on a like-for-like basis, compared to last year. The company also opened five new stores in this period “with a very positive customer reaction.”

The company, which saw sales in its grocery, sugar, agriculture and ingredients divisions grow during the four-month period, said Primark’s sales were 30 percent lower than last year at constant currency and 28 percent lower at actual exchange rates, at 2.03 billion pounds.

Primark’s performance impacted ABF group sales in the period, which were down 13 percent to 4.80 billion pounds.

The company added that Primark’s performance varied by store, “reflecting the prevailing circumstances of our customers at the time including home working, less commuting and much less tourism.”

It said sales at its stores in retail parks were higher than a year ago, while shopping center and regional high-street stores were lower than last year. Large destination city center stores, which are heavily reliant on tourism and commuters, continued to see “a significant decline” in footfall.

Trading performance of the U.S. stores continued to be strong, Primark said, delivering sales in line with last year on a like-for-like basis.

The company said it is now implementing the operational plans it developed to manage the consequences of the closures. As a result, ABF added, overhead costs have been “partially mitigated” with some 25 percent of operating costs of the closed stores being saved during the period.

It expects the group’s net cash before lease liabilities to be some 500 million pounds at the half year.

“The very positive customer reaction to these store openings, both in the U.S. and in Europe, was striking given the circumstances,” ABF said.