PVH Aims to Be Biggest in World 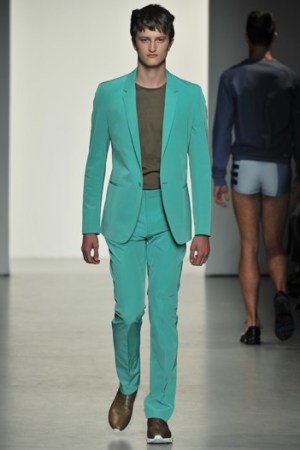 Brunello Cucinelli on His Fave Designers — and Normality

Phillips-Van Heusen Corp. wants to be number one.

“Our ultimate goal is to create the largest, most profitable branded apparel company in the world,” said Emanuel Chirico, PVH’s chairman and chief executive officer, at the company’s annual meeting Thursday at the Proshansky Auditorium of The Graduate Center at City University New York.

Without the Tommy Hilfiger business, the $3 billion acquisition of which closed in May, PVH would be a $2.5 billion apparel firm. Adding in the $2.3 billion Tommy operation, PVH becomes a $4.8 billion behemoth and surpasses other giants such as Hanesbrands Inc. ($3.89 billion in 2009 sales), Jones Apparel Group Inc. ($3.33 billion) and Liz Claiborne Inc. ($3.01 billion).

While PVH hasn’t yet vaulted over Polo Ralph Lauren Corp. at $4.98 billion or VF Corp. at $7.22 billion in annual volume, that is clearly Chirico’s long-term goal.

“The acquisition [of Tommy Hilfiger] puts us in a position of a much better balance,” he added.

Chirico set no time frame for the goal and made no reference to the possibility of future acquisitions in his remarks, but did describe the 2003 purchase of Calvin Klein Inc. as “a transformational transaction.”

“Revenues in the business are over $300 million, our operating margins are in excess of 55 percent,” the ceo said, noting the firm has “significant dress shirt and men’s sportswear businesses at wholesale and a very significant and profitable retail channel, with about 150 stores in the U.S.,” in addition to numerous licensees from which it derives royalties.

“Calvin Klein is composed of over 30 domestic and international licensees,” he said. “The business worldwide does over $5.8 billion in global retail sales. This year, we will cross $6 billion.”

Chirico pointed out that the firm spends $275 million marketing and promoting the Calvin Klein brand around the world.

Warnaco Group Inc. is the largest licensee with the $1 billion Calvin Klein Underwear and $1.6 billion Calvin Klein Jeans divisions. It plans to double those businesses globally over a five-year span. Warnaco will shortly launch the Calvin Klein X Jean and the Envy line of lace bras and panties, with Envy to feature a celebrity spokeswoman whose identity will be revealed in early July.

Envy, Chirico said, “will continue to bring energy not only to the underwear business but the entire Calvin Klein positioning on the floor.”

Diane Kruger will be the spokeswoman when Calvin Klein Beauty launches in the fall. Coty’s Calvin Klein business generates revenues of about $1.2 billion.

“As we look at the business here, and as we look at our licensee partners’ business plans and new product launch plans over the next three to five years, we believe we can continue to grow this business an additional $2 billion to $3 billion,” Chirico said of Calvin Klein. “There is a significant amount of momentum in this business.”

Moving to Hilfiger, Chirico said the acquisition “provides us with a continuation of the strong metrics we have in our business…from operating margins to return on investment and cash flow. It has excellent growth prospects, particularly internationally,” Chirico told attendees.

Like the Calvin Klein purchase, he noted, Hilfiger should also provide a solid platform for international growth for PVH.

Providing shareholders with an overview of the Hilfiger business and detail on its history, Fred Gehring, ceo of Hilfiger and PVH International, pointed out, “Fifty-eight percent of the business is done outside of North America. Also, the majority of profitability comes from the international business.”

According to Gehring, 80 percent of Hilfiger’s fiscal 2010 revenues will be from the European wholesale business, with Germany and Spain representing 40 percent of the total business at 25 percent and 15 percent, respectively.

The Dow Jones Industrial Average fell 1.4 percent, or 145.64 points, to 10,152.80 as banking stocks slipped and investors looked to Washington to gauge the impact of pending financial reform.

• Burkle’s American Apparel Stake: Financier Ronald Burkle of The Yucaipa Cos. LLC filed papers with the Securities and Exchange Commission saying that he holds slightly more the 4.3 million shares of American Apparel Inc., giving him a 6 percent stake in the firm. The filing said he’d bought the stock in “open market transactions since June 10, 2010, because, in his opinion, such shares were undervalued by the market at the time they were acquired.” While he indicated the purchases were for investment purposes, the filing said he “may modify his plans in the future” based on the performance of the firm and its equities. On Thursday, the firm’s shares fared better than most, slipping just 0.6 percent to $1.77 after it amended its credit agreement with Lion Capital (Americas) Inc. The amendment replaces the total debt to consolidated EBITDA covenant with a minimum consolidated EBITDA covenant. It also boosts the interest rate on the credit agreement to 17 percent from 15 percent.