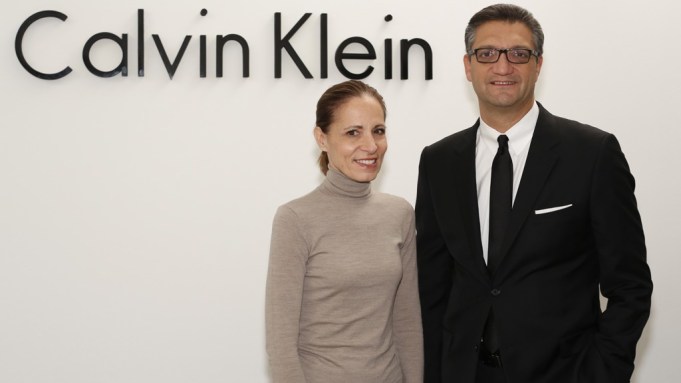 NEW YORK — It’s the megadeal after the storm.

On Wednesday morning, PVH Corp. said it would acquire Warnaco Group Inc. in a deal valued at $2.9 billion.

The transaction, delayed by 24 hours due to Hurricane Sandy, will turn PVH, which owns a portfolio of brands led by Calvin Klein and Tommy Hilfiger, into an $8 billion global branded lifestyle and fashion powerhouse — one of the largest in the world — and will reunite Calvin Klein with its two largest apparel categories: Underwear, owned by Warnaco, and Jeanswear, licensed to it.

Warnaco’s Calvin Klein businesses will be folded into the Calvin Klein Inc. division of PVH and run by CKI chief executive officer Tom Murry. The Speedo, Warner’s and Olga brands will be moved to PVH’s heritage division, which includes Van Heusen and Bass.

Helen McCluskey, Warnaco’s president and ceo, will join PVH’s board and help PVH through the integration, but she will no longer have day-to-day management responsibilities.

“The conversations started, I would say, almost eight years ago,” PVH chairman and ceo Emanuel Chirico said. “There has been constant dialogue between the companies, ever since we bought Calvin Klein in 2003.”

Talks became serious in mid-June during a lunch between the two executives at Da Umberto. “We started a dialogue about potentially putting the companies together and negotiations proceeded from there,” Chirico said, adding that the stars aligned themselves after the Hilfiger acquisition.

“From an operating point of view, we feel we have the management team and the operating platforms and expertise to take on an acquisition that is as complicated as the Warnaco transaction,” he said. “It’s such a global business with operating platforms in Asia, Latin America and a European and North American business. The Tommy acquisition really gave us a much more global footprint. Warnaco really was further developed in Asia and Latin America than PVH was. By having that platform, it gives us the ability to be a truly global company today with two strong lifestyle brands to drive the ship forward. I think it positions us well for the future.”

McCluskey added the deal was too good to pass up.

“While we have a lot of confidence in the potential of our business and believed in our stand-alone plan, the offer that was put in front of us through a series of negotiations was so compelling for both our shareholders as well as the business, that the board evaluated the offer with outside counsel and determined that, for our shareholders, this was really a fantastic outcome,” she said. “As for the business itself, we know we can accelerate the strategies that were put in place, and realize the full potential more quickly than we could have done, stand-alone.”

Investors liked the deal on both sides and Warnaco’s shares shot up 38.7 percent to $70.58 as PVH’s stock gained 20.2 percent to $109.99. But Moody’s Investors Service put PVH’s “Ba2” corporate family credit rating on review for possible downgrade. The debt watchdog said the transaction was generally seen as positive for PVH, but included a significant increase in its debt. PVH received $4.33 billion in financing from Barclays, Bank of America Merrill Lynch and Citigroup Global Markets Inc., which will be used to help fund the purchase and refinance other debt. The credit review will include a look at the firm’s exposure to Europe, which would account for about 27 percent of combined sales.

Chirico said the transaction was appealing on multiple fronts, including reuniting the Calvin Klein brand. “As much as we have been able to grow the licensing model, to be able to grow the brand, having two key categories that the brand has such recognition for (jeans and underwear) back in-house is critical,” he said. “We will be able to control the message. Even with the best of relationships working together, the licensee-licensor relationship, just by its nature, is not as efficient as having it in-house. There are contracts you have to worry about. There are approvals and duplications of efforts at times. As much as you try to build that all into the business model, it does slow the process slightly. By getting that out of way, it will take a lot of this duplication and inefficiency you may have out of the process, which will help us significantly going forward.”

Plus, he added, “When you look at it from a business perspective, to try to develop what Warnaco has in Asia and Latin America would have taken years for us. It would have taken significant capital investment to build, so to be able to acquire that overnight and be able to grow and enhance that with more resources is a tremendous strategic advantage that will pay huge dividends for us down the road.”

Nearly 75 percent of Warnaco’s business is with the Calvin Klein brand, half of which is through directly owned retail channels.

According to McCluskey, Asia represents more than $500 million, and Latin America more than $200 million of Warnaco’s business. Of those, Brazil is more than $150 million and China more than $200 million. “Those are two big emerging market businesses,” McCluskey said. “The growth in both of those areas has been in the 25 to 30 percent range over time. We have a great team on the ground operating these businesses. I think it offers an opportunity over time to look at some of the other PVH brands in the portfolio, and how do we exploit the expertise that’s on the ground there.”

The Warnaco businesses represent 36 percent of CKI’s total revenue and 40 percent of its licensing revenue.

CKI’s Murry added, “The Warnaco business was such a large and complex business that, going forward, to be able to own and operate it will improve the efficiencies and synergies to a great level. It will streamline the whole process. We have a good working relationship, and it works as well as it can, but when it gets to the size and complexity of Warnaco, it’s difficult. “It will give us the opportunity to control all aspects of the brand to a greater degree, whether it’s the product, the stores, the in-store presentation, the points of sale within department stores,” Murry added. “We will be able to have control over every aspect of the business.”

One financial source said the two firms tried to reach some sort of agreement repeatedly over the years. Which company was positioned as the buyer depended on “whose stock that year was better valued,” the source said.

The dynamic changed once PVH brought Tommy Hilfiger under its wing in 2010. PVH became the natural acquirer of the smaller Warnaco, which also saw a management change at the top after former ceo Joe Gromek retired in February and was pressured by weakness in Europe. And PVH had the playing field more or less to itself. The Calvin Klein licensed business would have reverted back to PVH if another company made a play for Warnaco.

With PVH and Warnaco joining forces, power in the fashion industry is further consolidated into a handful of large companies. “There’s an emerging group of guys in the space who are truly global and have powerhouse brands, like in the case of a Coach or a Ralph Lauren, or in the case of PVH, Calvin or Tommy,” the financial source said. That puts more pressure on smaller businesses with sales of just a billion dollars or so. The Warnaco acquisition helps PVH close the gap with the world’s largest apparel vendor, VF Corp., which has revenues of more than $12 billion.

The deal, which many in the industry saw as inevitable for so long, withstood the howling winds, rains and blackouts that accompanied the devastation of Hurricane Sandy.

Chirico and McCluskey signed off on the deal about 6 p.m. Monday night, just two hours before the massive storm made landfall near Atlantic City, according to Kenneth Berliner, president of Peter J. Solomon Co., which advised PVH on the acquisition. Much of Manhattan had gone dark by the time all the legal documents and the financing were completed at 4 a.m. Tuesday morning. J.P. Morgan advised Warnaco in the deal.

“It was a challenging endeavor to finish this deal in the middle of a hurricane,” Berliner said. “This was all carefully orchestrated and we had this great plan and, as of Friday, everything looked like it was going to be perfect and then all heck broke loose and everybody started calling audibles.”

Nearly everyone who was part of the deal was without power at the end, working on cell phones or from other people’s apartments.

“At one point in time, Manny [Chirico] had to drive to his church parking lot to attend a conference call,” Berliner said. “So I guess you could say that God was supporting this deal.”

Prior to the hurricane, Chirico helped push the dealmaking along with food. “Manny was insistent that every Sunday night that we worked we would order out from Bice for fresh pasta,” Berliner said, referring to the Midtown restaurant near the Peter J. Solomon offices. That’s a switch for Chirico, who helped get the Tommy deal over the finish line by ordering ice cream.

In the end, the businesses simply make sense together.

“The combination of these two players creates an $8 billion-plus revenue giant, with global heft and strong brand recognition,” said Eric Beder, analyst at Brean Capital. “The deal will allow Tommy Hilfiger to leverage the direct global retail reach of Calvin Klein, as well as shift PVH’s sales mix from 66 percent domestic to 58 percent, and create a single focus for Calvin Klein worldwide.”

“This is the strategic, tactical focus for us as we go through the next two to three years,” he added. “This will take the full effort of our management team and of our board, and provide us with a tremendous amount of growth for the foreseeable future.”

PVH observers should take note, though. The fashion giant has made three major acquisitions in the last nine years: Calvin Klein in 2003, followed by Hilfiger in 2010 and now Warnaco.