Ralph Lauren Corp. is on the move.

While the company kicked off its fiscal year with what Patrice Louvet, president and chief executive officer, described as a “solid start” in the first quarter, there’s still plenty of work to do to even out growth. The North American market lagged expectations as the business in Europe and Asia showed signs of strength.

Analysts called the quarter a “mixed bag” and “better than feared,” but generally seemed supportive of the company’s approach.

To build momentum for the long term, Ralph Lauren is focusing on its core items, boosting marketing spending and cutting expenses — flattening the organization and even axing the corporate jet.

“We feel good about the way the fiscal year has started,” Louvet told WWD in an interview.

Shares of the company started off with a gain on Tuesday, but reversed course and closed down 3.7 percent to $107.13.

In North America, which accounts for just over half of the company’s business, Ralph Lauren produced operating income of $158 million on a 3 percent rise in revenues to $719 million. Comparable-store sales in the region were up 1 percent, with a flat performance online.

In North America, the company’s average unit retail prices came in below plan. “It was really driven by the fact that we over invested in some fashion product and had to flush them out and that put some pressure on AUR,” Louvet said.

Louvet said there was no connection between the fashion misstep and the pending exit of Valérie Hermann, president of global brands, which was reported first by WWD on July 19. The ceo said Hermann’s departure had been under discussion for “several months” and that “it was a personal decision for her to move on.”

The change is leading to some management rejiggering, but “no major change of direction,” he said.

“We are not backfilling her role; we are using this opportunity to actually streamline how we are organized and we’re going to elevate several of her leaders, who now report directly to me,” Louvet said. “We will flatten the organization.”

That’s very much in keeping with the company’s broader efforts to control operations to fuel growth.

On a conference call with analysts, Jane Nielsen, chief operating officer and chief financial officer, said the group reduced its media partners around the world — to four agencies from 12 — and consolidated its ad buys under one global player to “drive scale and efficiency.”

In that vein, Ralph Lauren executives are also going to be flying commercial more.

Nielsen noted: “We also completed the sale of our corporate jet in the first quarter and donated the entirety of the proceeds to the Polo Ralph Lauren Foundation as we work to drive meaningful cultural shift in our organization’s cost and corporate responsibility mind-set. And we will continue to simplify our organization to improve agility and empower our leaders, as illustrated by some of our recent changes.”

The sale of the jet shouldn’t change life for Ralph Lauren, executive chairman and chief creative officer. According to the company’s latest proxy statement, “pursuant to his employment agreement and for security purposes, Mr. R. Lauren is required to use private aircraft for any travel and is reimbursed for the expense of business travel.”

In addition to operating more efficiently, the company is also working to strengthen its digital positioning, but the U.S. online business was hurt by international shoppers who decided to click “buy” less often or not spend as much.

“With the strengthening of the dollar versus foreign currencies and the new import restrictions in China, we actually saw an impact on the international customer,” Louvet said in the interview.

Count that — or at least part of it — as yet another fallout from the U.S.-China trade war that’s seen the U.S. impose tariffs on goods from China, which has retaliated in kind.

The on again, off again talks resumed this week — and President Trump is trying to ratchet up pressure on his counterparts. But there’s more than just a simple tit for tat and signs of a continuing shift in China, which is still morphing from the world’s factory to become a key consumer market.

Chinese shoppers have indeed become the most important consumers of luxury brands around the world.

For ralphlauren.com, while international web traffic to the U.S. e-commerce site is just a piece of the business, the strong dollar has impacted shoppers in enough countries to make a real difference. 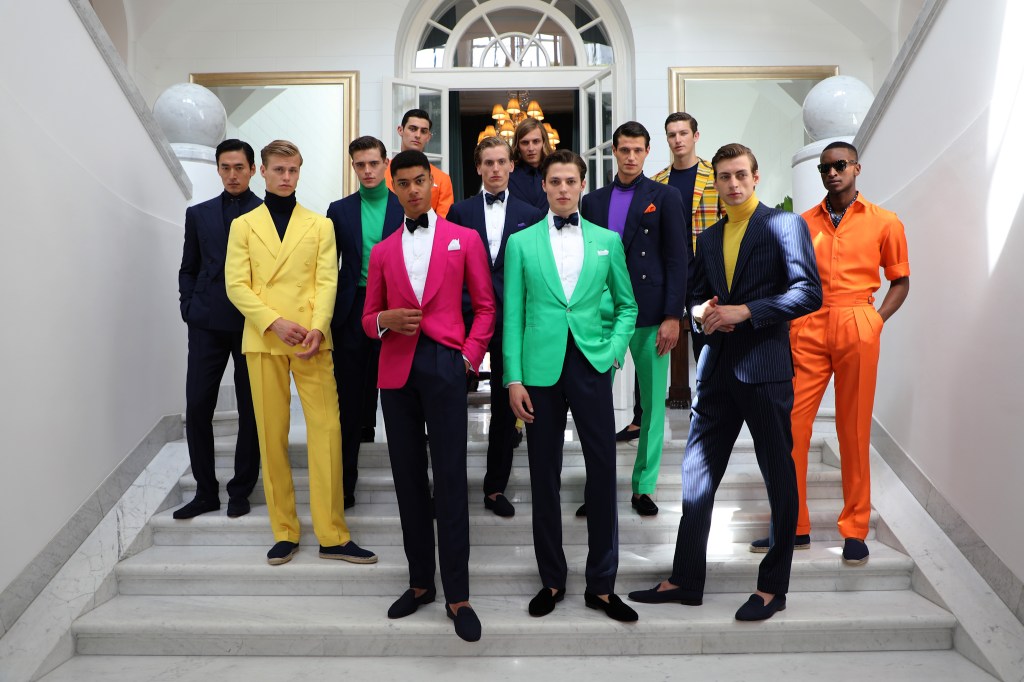 But the company has also been growing its businesses abroad that are picking up local customers.

Louvet said the brand has seen “continued momentum in Asia and Europe” where “product is really resonating.”

Wells Fargo analyst Ike Boruchow noted: “For Ralph Lauren ‘bulls,’ we think the focus coming out of today is that top-line and EPS remain on track [no negative revisions], with solid growth overseas continuing to drive growth and margins in the business, along with valuation which remains near trough levels. On the flip side, we think the U.S. market remains the focus for ‘bears’ — as the region [while not getting worse] is clearly missing plan.”

To keep moving forward and build with a new generation of shoppers, Ralph Lauren increased its marketing spend by 19 percent in the first quarter, with Pride day campaigns, the Earth Day launch of the Earth Polo and more money going into the digital and social channels.

Louvet said the company is spending a little bit more than 4 percent of revenues on marketing and wants to get that up to 5 percent.

“We’re in the brand business, we want to build the brand, and to do that we have to invest,” he said.

As Lauren said in a statement: “Our company continues to evolve with the world around us while staying true to our values and creating inspiring style that endures. And more than 50 years in, I am very encouraged by the work we are doing to strengthen the foundations of our business, energize our teams and elevate our iconic brands.”