The coronavirus shutdown in the U.S. caught the tail end of the company’s fiscal fourth quarter, pushing sales down 15 percent.

Patrice Louvet is looking toward the future at Ralph Lauren Corp.

The company has suffered plenty of the usual coronavirus pains, logging $249 million in net losses and a 15 percent sales decline in the fourth quarter — big declines made all the more stark by the fact that the quarter only included the first few weeks of the U.S. social distancing shutdown.

But Louvet, who is Ralph Lauren’s president and chief executive officer, told WWD on Wednesday that the company came into the crisis “from a position of strength,” fortified by its cash position, its e-commerce business and the flexibility of the brand itself, which is seeing a surge in the home area as people settle in during the pandemic. He also pointed to the company’s values, tied to timelessness, togetherness and optimism.

Louvet certainly epitomizes that last one.

“Given the strong foundation, we really believe we have an opportunity to grow market share through this period and as we come out of it,” he said. “We’re going to continue our brand elevation journey, continue to play offense.”

But climbing out of crisis is a tricky business.

The ceo said it starts with focusing first and foremost on the health and safety of the company’s employees and customers. 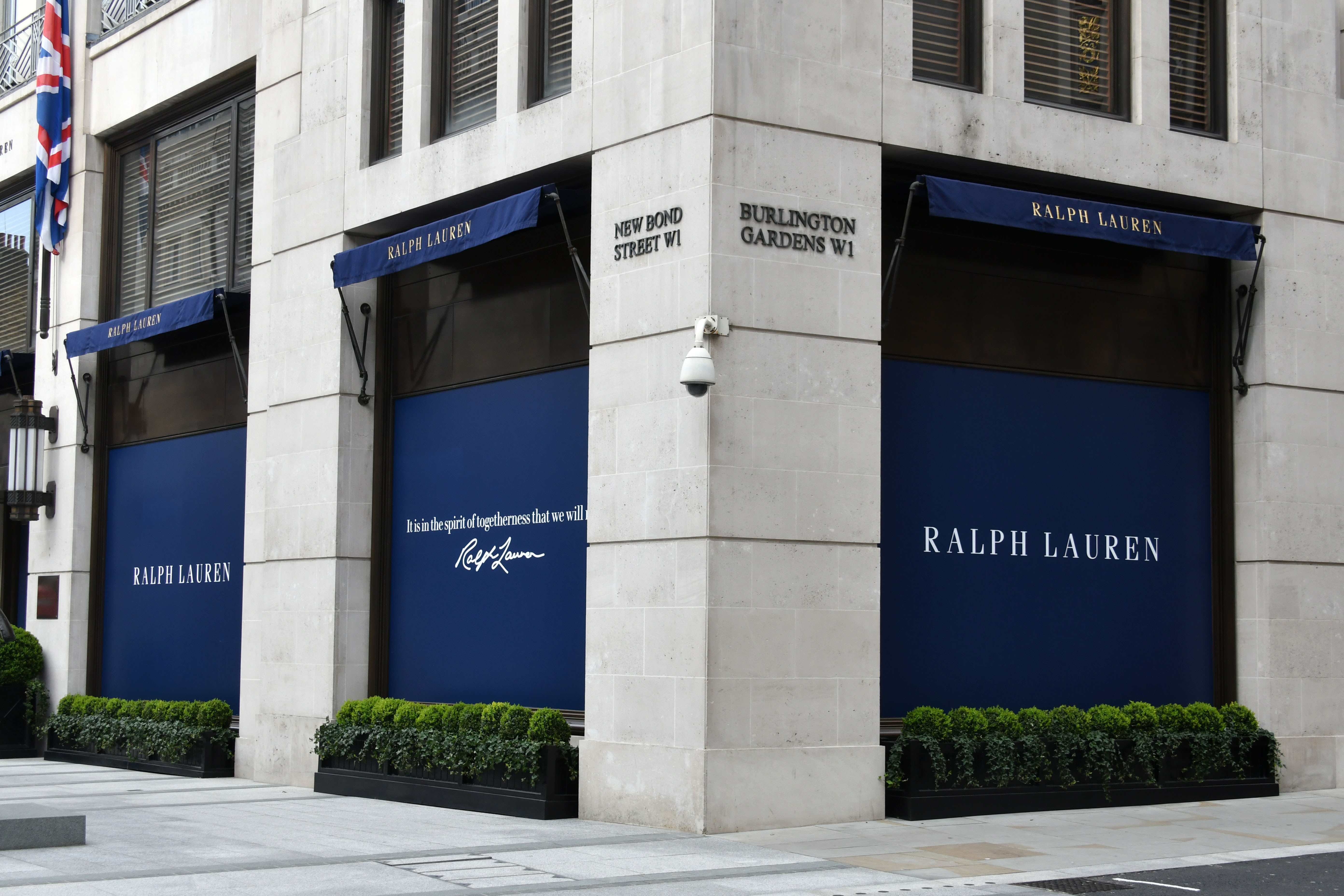 A Ralph Lauren store locked down in London this April.  Nils Jorgensen/Shutterstock

Ralph Lauren is learning to operate in a changed world and has reopened about two-thirds of its stores in Europe as well as nearly half of its doors in North America — with roughly 90 percent of them in open air settings, not enclosed malls.

The majority of the firm’s corporate teams are still working from home and are expected to do so for “the foreseeable future,” Louvet said.

Like the rest of fashion, the company has started getting used to different ways of operating — from curbside pickups at stores to digital design processes.

“It will be a long road back, but at the same time, we feel confident,” Louvet said.

China, which was hit first by COVID-19 disruptions, is now starting to come back but it’s not clear how much of a model that will be for the West, which has had a much more varied response to the pandemic.

Ralph Lauren’s China business was down 85 percent in February, 50 percent in March and then about 10 percent in April. While online growth has been strong, traffic in stores has remained slow but with higher conversion rates. Stores are getting frequent deep cleanings, associates get masks and the number of people allowed inside at one time has been limited.

“In May, we are now back to growth in China,” Louvet said.

He said he was “quite encouraged” by China’s bounce back, but that while it is offering good consumer insights for the West, the path back will vary from market to market.

“I don’t think it’s something where you can take the number and just extrapolate them through North America and Europe,” he said.

A conference call with analysts made clear just how many things are changing for fashion companies now — from stores to design and beyond.

Louvet told analysts: “We still believe in the role of the store, and we’re encouraged by the early connected retail interventions like curbside pickup, for example, but we’re going to continue to review our store portfolio in the context of our omnichannel strategy. And especially within North America wholesale, this means continuing to concentrate on our most productive brick-and-mortar doors, which are generally the top doors of our wholesale partners anyhow, as we also grow select wholesale dot-com opportunities.”

The ceo also pointed to the increased speed of business, especially given the COVID-19 crisis.

“We’ve been able to do things in weeks and days that typically would have taken us months or years to do,” he said. “This includes our ability to work remotely around the world, continuing to digitize our end-to-end value chain and also driving a culture of cost discipline, which is obviously critical in the current environment that we’re in.”

Like most other companies, Ralph Lauren is not giving financial guidance given all the uncertainty, but chief financial officer Jane Nielsen gave some sense of the future when speaking of the company’s wholesale business. “We were able to cancel about two-thirds of our fall/holiday orders, take stock of where we were on an inventory level and then fill in to make sure that we have fulsome assortments for fall/holidays that are better aligned to demand,” she said.

Ralph Lauren, executive chairman and chief creative officer, added in a statement: “For more than 50 years, we have embraced the idea of timelessness — it defines not only our products but our business and our culture. It has guided us through the best and the worst of times and will carry us through this unprecedented challenge, too. Together our leaders and teams worldwide remain focused on not only enduring through this global pandemic but thriving for decades to come, and supporting the communities where we operate around the world.”