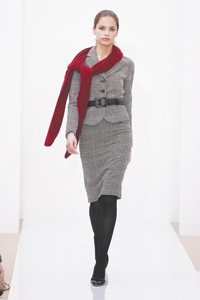 While the retailer still lacks fashion sizzle and the command over the career market it once had, Ann Taylor Stores, with its updated classics, is seeing consistent performance across both its Ann Taylor and Ann Taylor Loft divisions. And that’s particularly noticeable given that retailers such as Gap, Talbots, Limited Brands, Sears Holdings and Saks Inc. all continue to struggle with one division or another.

“We are in the midst of a turnaround,” said Kay Krill, chairman and chief executive officer. “It’s just the beginning. We are not saying that we are there, but we are constantly making improvements.”

The momentum, marked by stronger earnings and eight straight months of positive comps overall — 10 straight months by Ann Taylor Stores alone — stems from better product, fewer markdowns and stronger control over inventories. And the company’s shares are responding: The stock closed Friday at $41.82 in trading on the New York Stock Exchange, hitting a 52-week high. The low was in October at $23.

The pace should be sustained at least through this year, partly because the corporation is up against weak comps from last year. As a result, the truer test of whether there is a genuine revival of the brand will come next year.

Krill, a veteran of the organization who recently rose to the top, has put the brand on a new path after a decade of excessive executive turnover, fashion miscues and roller-coaster performances, particularly at the Ann Taylor stores division. She took the helm in October after serving as president over all three of the company’s divisions — Ann Taylor, Loft and the outlets — since 2004. Earlier, she ran just Loft, catapulting it from a concept housed inside Ann Taylor stores to a fast-growing stand-alone chain with sales of $1 billion. Loft is still growing quickly, opening 60 stores this year, and could almost double in size. The 421-unit chain sees a cap of 800 stores.

The Ann Taylor division seems to have transcended its checkered past, finding styles and colors that are in tune with customers. The group also is rapidly remodeling stores to a neutral palette, from a yellow tone, to help the clothes stand out.

“We’re adding interest in the windows and positioning mannequins with more variety,” Krill noted. Forty-three units were remodeled last year; 52 will be remodeled next year, and, by the end of next year, 50 percent of the Ann Taylor fleet will be renovated with new floors, mannequins, fixturing and furniture for a residential feel.

In the first quarter of this year, Ann Taylor Stores’ net income rose to $39 million from $17 million in the prior year on sales of $556.2 million against $476.4 million. Same-store sales gained 7.4 percent at Ann Taylor and 4.7 percent at Loft. Inventories are down 19 percent on a per-square-foot basis.

“Differentiation has been a major initiative,” Krill said, explaining her efforts to make Ann Taylor distinct from Loft. At Ann Taylor, “we are focusing on go-to-work, special occasion and daytime social. We want to own the professional market but in a more fashionable, updated, stylish way. We have downgraded casual,” she added, so it represents 10 to 15 percent of the assortment, depending on the quarter.

Loft has “a more relaxed sensibility,” Krill said, and is known for casual and fun separates, including gauchos and knit separates. It doesn’t sell special occasion and tends to perform best in spring and summer. Prices are 20 to 30 percent below Ann Taylor’s.

Loft’s presentation is being uplifted with more head-to-toe merchandising, featuring outfits on long tables or “runways” in the middle of the store, where key items previously were displayed. Also, a limited denim presentation will be bolstered in the fall with new washes and fits, and a premium line at select stores; children’s wear will be focused on toddler girls as a gifting strategy for holiday, and last year’s swimwear test was successful enough to roll out the merchandise through the chain.

As for other initiatives:

The average customer age for each brand is 36 to 37. Loft has a lower household income average, $125,000 to $130,000, whereas Ann Taylor is $150,000. Officials say Ann is priced in the better-to-bridge zone and Loft has a “value/quality” component. The divisions compete most directly against such chains as Talbots, J. Jill, Chico’s, Zara and Banana Republic, as well as department store brands such as Lauren by Ralph Lauren, Jones, Ellen Tracy, Liz Claiborne and Eileen Fisher. The divisions get merchandise updates every couple of weeks, primarily affecting the entryways and the windows.

For years, the company seemed behind the times. Besides becoming dated, the stores were cluttered with extraneous merchandise that meant little to customers. Floor sets, which serve as templates to establish how stores should present merchandise each season, were arranged haphazardly in conference rooms, with products strewn on tables and floors, resulting in presentations that “weren’t very clean or focused,” Krill acknowledged. Ann Taylor and Loft cannibalized sales from each other, with some of Loft’s success driven by customers who wanted looks similar to Ann Taylor’s but at lower prices. There was even said to be a dress code — ivory panty hose, suits and pearls was the look — but officials said there was never such a thing.

What a difference a year makes. In May 2005, the company moved into new headquarters in Times Square with “store labs” for arranging store floor sets with precision, and a merchant is in charge. The Southern-born, animated Krill succeeded J. Patrick Spainhour, an operations and financial executive. One of the first things Krill did was create brand books for Ann Taylor and Loft. “They are the filters for everything.” Senior leaders, she said, pored over the research and archives and “really defined the iconic customer. There was no branding work done previously.” All design and marketing people get the branding books. “We live by them.”

“Through the years, we were either too safe or too fashionable,” Krill said. “Now we’re finding the right balance. We are incorporating brand-appropriate fashion back into the assortment.”

Krill also has a new team in place, though there have been some serious hiccups in the building process. Chief operating officer Laura Weil and chief marketing officer Muriel Gonzalez abruptly resigned within a month of each other in the spring. That’s left a sense that Krill has her hands full and is even more dependent on the two head designers, Shari Hershon, senior vice president of design at Loft, and Michael Smaldone, senior vice president of design at Ann Taylor, and may require more bench strength — particularly on the creative side, to create greater buzz. It’s a company that one source familiar with the inner workings described as weighted more to planner and allocator types.

“Kay still has to be picking colors and styles herself, and doesn’t have a strong operating partner,” said the source. “Quite frankly, there’s a lot of pressure on her. The biggest problem is that the company is incredibly insular.” According to reports, Krill and Weil locked horns on various issues. “There were two strong personalities there, with two strong points of view,” said another source from the financial community. Gonzalez left for different reasons: She joined Macy’s Merchandising Group as a senior vice president supervising accessories, jewelry, handbags, footwear and intimate apparel. The news about Gonzalez was softened by naming her successor right away — Elaine Boltz, who had been senior vice president of corporate strategy and brand development — and two division presidents, Adrienne Lazarus for Ann Taylor and Donna Noce for Loft.

While Krill is deep into the merchandise, “it’s not like one person can dictate the whole look. It’s done by committee,” said Jennifer Black of Jennifer Black & Associates retail analysts. “That creates a lot of dialogue for each of the brands and puts up some safety nets so that they keep tried-and-true to their customer. The combination of the brand books and the team approach is working well.”

Black added that she’s made Ann Taylor her top stock pick for this year. She’s projecting $1.82 versus $1.26 for the year, and gross margins at 54.2 percent versus 50.9 percent due to better full-price selling. “Kay understands that, for investors to take the stock seriously, consistency is really needed,” she said.

According to a retail consultant, “One of [Krill’s] skills is to empower people and recognize people for what they have done, and the company is at a point where they’ve learned from past mistakes. The story is about the consistency that lies ahead, versus what has been 10 years of inconsistency. I think they have set the disciplines they need, and the teams are in place. Ann Taylor still has a name that resonates. There’s brand equity left in that name. The jury is still out, but there are major signs they are in the right direction.”

“Under Kay’s leadership, the company is really figuring out what customers look to Ann Taylor for,” said Sapna Shah, partner at Retail Eye Partners, an independent research firm for specialty women’s apparel and home furnishings, and a former Ann Taylor employee in strategic planning and business development. “They’ve nailed the occasions to focus on, and eliminated all the clutter, like jeans and denim that nobody really came to Ann Taylor for. It’s the first place people think of when they’re going to a wedding, not a black-tie, but a day wedding, or an evening event where you need something dressy but not formal. People also think of Ann Taylor for work, like suits, and for special pieces like if you are meeting the in-laws for the first time over lunch.”

“Ann Taylor is a great American retail brand,” said Jaqui Lividini, partner in LWP, a marketing and communications firm. “It has tremendous untapped potential, because of its unique and enviable position in the market to capture a young adult customer right out of college and through all the evolutions in her life. A lot of brands get customers at a certain point in their life, and then lose them.”