Reebok's pending sale to Adidas for $3.8 billion is having a negative impact on the firm's performance, but earnings in the third quarter were robust. 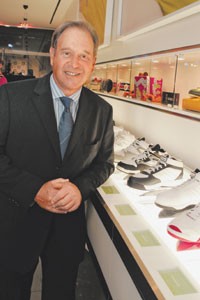 NEW YORK — Reebok’s pending sale to Adidas for $3.8 billion is having a negative impact on the company’s performance, although earnings in the most-recent quarter were robust.

“We believe that the announcement of our planned merger with Adidas has created, in the short-term, some retailer uncertainty with respect to our company and that this impacted our sales and order intake in the quarter,” said Kenneth Watchmaker, Reebok’s executive vice president and chief financial officer, in a call with analysts Monday to discuss the company’s third-quarter results.

The athletic giant’s earnings in the three-month period ended Sept. 30 soared 43.9 percent to $117.7 million, or $1.87 a share, from $81.8 million, or $1.34, last year, but this year’s results were helped by a $49 million after-tax gain from the sale of the licensed Ralph Lauren footwear business back to Polo Ralph Lauren Corp. The Canton, Mass.-based Reebok also had unusual expenses in the quarter, including $2.5 million in legal and other costs associated with the Adidas purchase, and other costs from the integration of The Hockey Co., which was acquired in June 2004.

Reebok in addition was hurt by a decline in sales to Foot Locker of $46 million, due in part to that retailer’s decision to lower its overall inventory, Paul Fireman, Reebok’s chairman and chief executive officer, said in a statement. The company’s shares slipped 21 cents to $57.21 Monday in trading on the New York Stock Exchange following the news.

Sales in the quarter fell 10 percent to $1.04 billion from $1.15 billion. Worldwide, the company’s footwear sales, including the Reebok, Rockport and Greg Norman brands, dropped 16.9 percent to $589 million, while apparel slipped 0.7 percent to $452.2 million. Reebok brand apparel sales saw slight gains in the U.S., rising less than 1 percent to $204.8 million, with the increase largely coming from the cobranded licensed sports apparel, which includes products associated with the National Hockey League, National Basketball Association and National Football League.

Sales of women’s products from the NFL and NBA “rose substantially,” Fireman noted.

Nonetheless, John Shanley, an analyst with Susquehanna Financial Group, said in a note that Reebok’s licensed apparel sales are driven by fan-based demand and that the company is still lagging in its own branded product. The company has “yet to develop a viable Reebok-branded apparel program” to compete effectively with the offerings of Nike and Adidas, and the increasing popularity of the Puma-branded apparel merchandise categories, Shanley wrote in the note.

Footwear sales for the Reebok brand were particularly depressed in the U.S. this quarter and Shanley attributed the decline in part to changes in fashion trends away from Reebok’s more traditional footwear styles. U.S. sales in this category dropped 20.3 percent to $241 million from $302.4 million last year, due in part to lower sales of its Classic category, which has been a sales driver in recent years.

“During the back-to-school period in the U.S., sales of Classic derivative products slowed down at retail, as we continue to see a shift in the U.S. market toward performance products,” Fireman said. “Our new Pump technology product introduction is still in its early stages.…We believe the Pump technology will become a volume and earnings contributor as we evolve the technology and market its benefits to sports performance enthusiasts.”

The company’s other brands, including Rockport and Greg Norman, saw strength in the period, Fireman noted. Internationally, Reebok brand footwear sales slipped 8.9 percent to $238.9 million, and apparel dipped 3.1 percent to $227.4 million. Margins in the quarter were up to 43.3 percent of sales from 40.4 percent, due in large part to improvements in the international markets, Fireman said.

Backlogs for the Reebok brand are down about 18 percent for the next six-month period, due in part to “uncertainty around the proposed merger,” cfo Watchmaker said on the call. Reebok executives also affirmed earnings guidance for the fourth quarter of between 55 and 65 cents a share.