But just which company will go first remains to be seen as stores and lenders feel their way through the COVID-19 shutdown.

By Evan Clark and Sindhu Sundar
with contributions from Arthur Zaczkiewicz, David Moin
on April 27, 2020

J.C. Penney has missed an interest payment and is huddling with its lenders.

Who’s going to be the retail bankruptcy guinea pig?

Neiman Marcus Group, J.C. Penney Co. and Lord & Taylor all seem like contenders to test just what running out of money looks like during the COVID-19 shutdown. And there are plenty of other companies that came into the crisis on debt watch lists, including J. Crew Group, Ascena Retail Group Inc. and Academy.

But even though the financial stress is acute in fashion and retail, it’s still not clear just how some of the practicalities of a bankruptcy filing would work out today. And that’s where the guinea pig part comes in.

In some sense, most of the fashion retail sector has entered a state of pseudo-bankruptcy. Even if companies haven’t filed for protection from creditors, scores of major retailers have stopped paying their vendors and halted orders, skipped their rent payments and furloughed most of their workers. Still, they don’t have enough money coming in through their web sites to cover their obligations for long.

While that’s a textbook set up for bankruptcy, it’s also a series of problems that a Chapter 11 filing can’t fix right now. While companies often file to get a reset on their bills and get out of some leases, what’s it matter when the whole industry is frozen?

So companies on the edge walk a very fine line, negotiating with lenders and making their pitch for why they can survive in the long term with or without a bankruptcy. Even if companies do file for Chapter 11, they’ll first need to drum up financing to carry them through the process — and it’s expensive to go broke, with fees for advisers running in the millions of dollars. 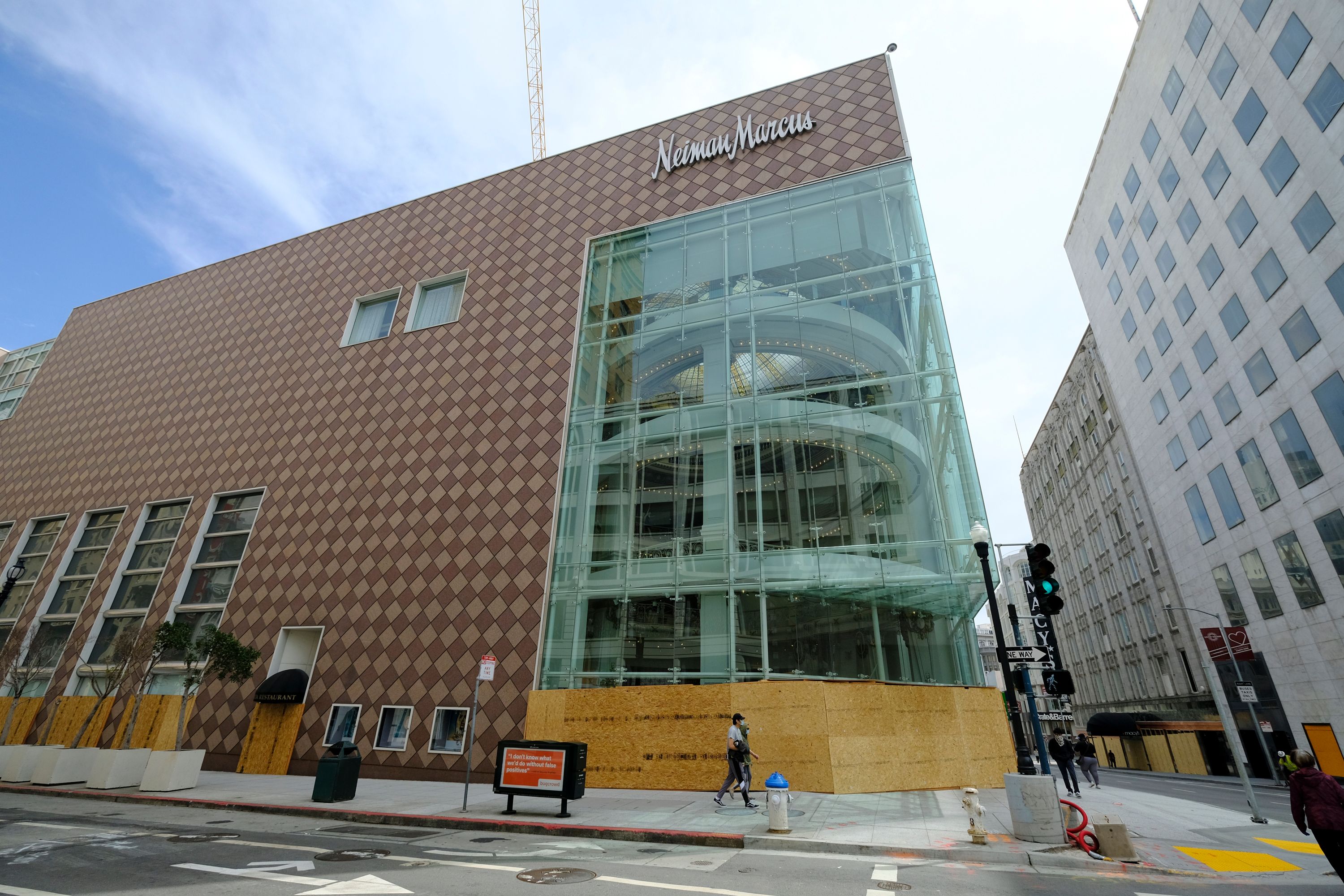 A Neiman Marcus in San Francisco, closed and boarded up for the COVID-19 shutdown.  Eric Risberg/AP/Shutterstock

According to one source, there could be multiple parties looking to give Neiman’s debtor-in-possession financing that would be used to keep the company operating in bankruptcy, a situation that is delaying the filing.

J.C. Penney, with $5 billion in total debt and a stock market capitalization of just $78 million, was reported to be in advanced talks for DIP financing. But one source close to the situation said “bankruptcy is not imminent” at J.C. Penney, that “no final decision” has been made and that the company “continues to consider all financially prudent decisions on the table.”

Right now, a filing for any retailer would only offer so much help.

“The typical benefits from a Chapter 11 are difficult to take advantage of during this period of shutdown,” said Matthew Katz, retail and consumer practice lead and managing partner at strategic advisory company SSA & Co. “Inventory valuations are next to impossible to determine, that’s not even taking into account the current inability to access the inventory required to stage it for a liquidation event. Valuations are based on expected returns and even if you could value the inventory, it’s beyond challenging to try to determine shopping patterns and consumers’ taste for consumption.

“The number of retailers who are lined up talking to landlords about lease renegotiation is staggering,” Katz said. “Most have decided it is easier to kick the can down the road and just not pay rent to deal with consequences later. The down-the-line impact of those actions is yet unknown, but obviously quite large. Once the environment eases to support ‘routine’ preparation activities for a bankruptcy, the world will be anything but routine. Court time, judge availability, adviser capacity suggest the larger companies will file first. Therefore, smaller-sized business who are on the edge of insolvency will need to find ways to amend and extend to avoid Chapter 7 [liquidation].”

And just what retail will look like when consumers reemerge remains one of the biggest questions for anyone trying to figure out which players to put their money behind now. After all, the goal of a bankruptcy is to reorganize and then come out as a more financially stable, going concern. But who can pick those players when even the strongest fashion retailer players are barely selling anything?

Department store chains eyeing bankruptcy or store closures might consider not reopening any units once “stay-at-home” orders are lifted. Jane Hali & Associates told clients in a research note that she expects the “vast majority of C-mall anchors will not reopen and probably a sizable percentage of B mall anchors as well.”

“Unless the landlord has a redevelopment plan ready to go when the box goes vacant, the department stores will continue to be liable under the lease unless/until they file for bankruptcy,” Hali noted.

Another industry source said firms specializing in liquidation, such as Gordon Brothers, are likely waiting on the sidelines — at least for the moment. Store liquidation sales can’t be currently conducted, and when stores do reopen, it may be a challenge to move dusty, spring merchandise from physical stores.

With so much in flux, many of the parties with an interest in a company’s solvency might want to hit pause, if only for a little while.

“In this environment, without knowing what’s going on, why would a retailer look to file today, as opposed to a month from now, when it’s a little bit more clear when stores can open up?” said Jay Indyke, who chairs Cooley’s business restructuring and reorganization practice group.

“Until you have a better feel for when things are going to open up, you’re not going to be able to have budgets that are more reliable,” he said.

The bankruptcy code requires companies in bankruptcy to punctually pay their bills, including rent. Such payments owed during the bankruptcy, known as administrative expenses, have priority for prompt payment.

But the handful of retail or fashion companies that have filed for bankruptcy recently illustrate the difficulties of meeting those obligations while stores are closed, as well as courts’ willingness to accommodate them.

Both Pier 1 Imports Inc. and Modell’s Sporting Goods, which filed for Chapter 11 protection this year, have obtained so-called “mothball” orders from the bankruptcy courts overseeing their cases, which temporarily pause their difficult obligations, including rent payments.

Pier 1 had outlined something called a “Limited Operating Period” during which it would halt making rent payments, saying it could not afford to pay its $9.4 million in monthly rent until stores reopened.

“Without stores generating revenue, the only way to preserve liquidity and give the debtors a chance at a going-concern reorganization or sale is to drastically reduce the costs associated with the stores,” the company wrote in a court filing last month.

True Religion, which filed for bankruptcy this month, made a similar request, asking for permission to hold off on paying rent for 60 days.

These machinations directly affect discussions with lenders, who are more likely to extend financing to retailers that have been able to work out arrangements with their vendors and landlords.

“We know that there are retailers out there now that are looking to cut deals with their vendors and landlords,” said Indyke of Cooley. “If they’re able to cut certain deals, they can take those deals back to their lenders, and say, ‘we have some forbearance from our landlords and vendors,’ and that helps them negotiate additional extensions from their lenders.

“Right now, we’re in that balance period where those discussions are happening,” he said.

For lenders, the choice to extend financing under difficult circumstances can come down to how they view the company’s prospects and their pre-existing investment in the retailer. A company’s existing secured lenders tend to be the most-likely sources of debtor-in-possession financing, but perhaps even more so during this crisis.

Both J.C. Penney and Neiman Marcus are said to be huddling with the lenders who have already loaned them money in an effort to get some more money to see them through to the next step, whatever that is.

Existing secured lenders that double down by providing funding during a bankruptcy have the option of making a “credit bid” to buy the company’s assets for less.

Today’s retail lender might well be tomorrow’s owner — and then they’ll have to figure out how to navigate a whirlwind of a market.